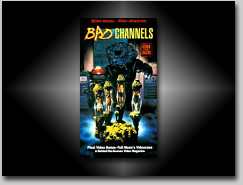 Overview: A radio station in the middle of nowhere is taken over by an alien and his pet robot. It stars Martha Quinn, and could be considered the final nail in the coffin of her unfortunate career. The film also includes fungus, bad music, bad acting, rednecks, pretentious character names, continuity errors out the yin-yang, and lots of general embarrassment for all involved. Even I'm using a pen name.

The Case For: America loves to watch people rise to stardom almost as much as seeing them fall. Although I was too young to appreciate Martha Quinn's rise to fame, man…this film is an incredible testament to the cataclysmic effect the 90's had on the careers of entertainers from the 80's. Plus, there's a nun on a cart playing guitar.

The Case Against: Everything I mentioned in the overview plus I kind of like Martha Quinn, so this isn't as much fun for me as it will be watching Serena Altschul's bad movies in the years to come. Movie ranks up there with "Rock and Roll Nightmare", but sadly comes up lacking in the "Sock Puppet Department". 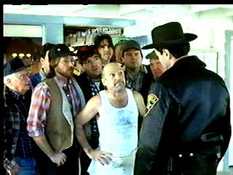 The townsfolk can wait to beat em up sum aliens, illegal or otherwise.

Ah, the early 80's. A simpler time, when America still yearned for people who didn't look like they slept their way to the top of the movie production ladder. It was the era of MTV, when a young and energetic innocent named Martha Quinn was about to be in the eye of the video revolution hurricane. The world fell in love with Martha and thought, "Wow, how can MTV be a bad addition to our lives, that girl looks so innocent and full of spunk!" And indeed she was.

Cut to ten years later. Martha is now looking for her next fix and doing cruddy B-grade horror movies ala "Chopper Chicks in Zombie Town". But that cinematic classic didn't end her movie career, "Bad Channels" did. This is the last evidence you'll be able to find of Martha Quinn ever being in a movie or doing anything. She's still spunky in this movie, but with less of an innocence about her and more of a "I could fucking kill Tabitha Soren." look in her eyes. When you see clips of this movie, remember it came out in 1992, not 1982.

Our tale begins with Dan O'Dare, the alleged "Bad Boy of Rock 'n 'Roll". How he got that nickname we don't know, because he's only a mediocre, idiot DJ (come to think of it, the actor's real name, Paul "Hipp" is a mystery too). For some reason, the fact he's broadcasting from a shitty, no-watt station in the town of Pahoota, California, is national news to a "nationwide television reporting station". The conceited anchorman, Flip Humble (oh God, kill me now), and O'Dare have a promotion scam going on. Here's the deal behind it: Flip gets a really nice car from a contest O'Dare puts on to see who can guess the combination to the lock that keeps the chains in place, which prevents him from taking a polka record off of the turntable. Whew, no wonder this station gets nationwide publicity! But forget all that crap... the aliens show up ten minutes later, the movie goes out the metaphoric poop shoot, and a new story begins. 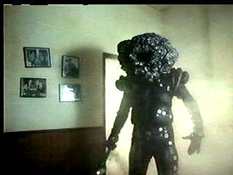 Creatures from another planet often have apple fritters for a head.

An alien lands on Earth, piloting a reddish swirl that makes lots of noise. Apparently that's his ship (the movie had to inform us of this, otherwise we'd be under the impression that it was a large, electric onion ring). This alien completely disintegrates someone in his first scene, but somehow is later vulnerable to getting beaten with a stick, along with being sprayed with industrial disinfectant. He shows up with a "robot" pal who looks like a rejected Crow T. Robot model from MST 3000, only this one's supposed to be really cool lookin'. I'm not insinuating the people who made this movie had no sense of humor, I'm just saying they would have been better off building a two ton whoopee cushion.

The alien gets into the station and bombs it with a green ooze that seals in Dan, the alien, the "robot" pal, and the Chunky Engineer who cracks under the pressure of the situation and gets turned into a giant cocoon. The alien and "robot" start to push around creepy, marital-aid looking levers that seem to do nothing. Then something fucked up happens. Dan O'Dare looks in a little, red, alien viewfinder and sees a girl who works at a local diner (run by the local Creepy Fucker Who Shouldn't Be Preparing Food of Any Kind, "Peanut"). All of a sudden, an 80's hair band charges the diner with their instruments and begins to play crappy music. Then the girl ends up shrunken in a little pod inside the radio station. It turns out the alien and his robot just want hot 12 inch girls with names like Bunny and Ginger as pets (I'm not making this up), and they get them by teleporting shitty rock bands through the radio. No, we don't understand it either.

Well, once this dastardly and stupid plot becomes apparent, the irony kicks in. Dan's been broadcasting the whole time and keeping people interested, and that's exactly what the alien needs to get hot girls into his little pods. Dan goes as far as to tell people to stop listening (everyone of course thinks the whole thing is a publicity stunt), but keeps on broadcasting, forcing us to sit through two more music videos and two more dancing girls. However, I will say the last video by Sycotic Sinfoney was a helluva thing. I hadn't laughed that hard since I saw "Troll 2", though Pahoota, California is no Nilbog. 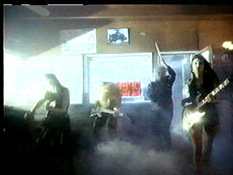 One of the many embarrassing "bands" to grace this movie.

Then there's a scene where some fungus dances to tunes on the radio... umm…

Oh, and for all six of you concerned about the fate of the "robot", it accidentally zaps a high school tuba player into the 12 inch jar instead of Martha Quinn, so the alien kills it with it's electric cock-wand. The end, bye-bye, cya later Tinker-Toy "robot".

The whole plot is wrapped up nicely, and Martha Quinn and Dangerous Dan O'Dare end up together (I think). And the alien escapes. And the fat man gets out of the cocoon. And some woman with a fake Russian accent exchanges heated looks with Martha Quinn for some unknown reason. And Martha Quinn makes a snide remark to the black anchorman.

There's some great moments in this film, including when the local electrician gets interviewed while being eaten by fungus, and when the nun rocks out (with guitar) on a cart. Who could ask for anything more from a film besides a bag to throw up in? "Bad Channels" is truly something awful, and Martha Quinn, wherever you are, "You kick ass. If Florence Henderson is on TV, you should be in movies… just not this one."