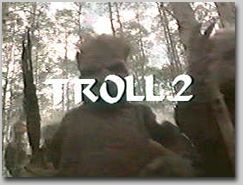 Overview: The world's dumbest family swaps houses with a bunch of evil farm yokels and gets chased by goblins until the director runs out of film or they all quit to resume their "real jobs" at Dairy Queen.

The Case For: Video can be used to render family members or friends unconscious, allowing easy access to their wallets.

The Case Against: Besides being the absolute worst movie I have ever reviewed, even more awful than "Feeders", I can't think of anything offhand. Oh wait, there's not a single troll in the movie despite its title, does that count? 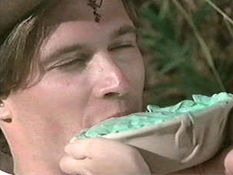 The morons in "Troll 2" routinely ingest green crap like this for no logical reason. I guess it beats Del Taco.

There's nothing quite like a good sequel, a movie that can successfully pick up where the original left off and continue the grand and epic storyline behind it. Then there's something like "Troll 2", a movie that by all physical laws of the universe, should simply not exist. I am continually exposed to the worst of the worst movies out there, and I keep naively thinking that each one cannot be topped. After seeing "Feeders", this theory pretty much proved to be true... until I found a copy of "Troll 2" sitting on the shelf at Blockbuster Video. Hoo boy.

This area of the page is usually dedicated to a general summary of the plot, but since I can't really find one in this movie, I'll just write about the random events that occur in no sequential order. The video begins with an fat old man named "Grandpa Seth" narrating a pointless story to his grandson Jonathan. According to "legend", some guy with a silly hat ran through the woods once, attempting to escape the clutches of some evil goblins who were undoubtedly attempting to catch and hit him with their fake plastic masks. The idiot guy with the hat eventually falls down and is picked up by a comically dorky woman who feeds him magical green porridge. This pastel green soup makes him sweat Cascade dishwashing detergent and turns him into "half man, half plant", which I like to call a "mlant." He is then supposedly eaten by the goblins, but I'm not exactly sure how this happens because the prop guy didn't cut the holes for their mouths big enough to get anything larger than a Tic-Tac through. Maybe when "Goblin Mask v2.0" is created, they'll be able to physically put something in their tiny mouths other than the director's minuscule penis.

The backstory-story is then interrupted when Jonathan's mom walks into the room and Grandpa Seth instantly disappears. According to the movie, this is because Seth has been dead for half a year. Mom and dad begin to talk about how excited they are to go to the town of "Nilbog", where they're swapping houses with a farm family. Yes, "Nilbog". The town is named NILBOG. Do you get it? Are you impressed with the extreme degree of cleverness and creativity the "writers" exhibited when brainstorming this plot in their respective jail cells? NILBOG, hahaha! I won't even go into detail with how intensely stupid the idea of swapping houses with a random farming family in the woods is, but then again, this movie seems to have been filmed in some sort of alternate universe where aliens dress up and try to act like how they guess human beings would. Nobody in this video reacts in any explicable sense to the events that occur around them. It's almost as if they wrote down six basic human emotions on a piece of paper and rolled a die every scene to determine which one they would attempt to portray. 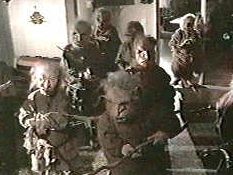 The goblins show up for their biweekly homeowners meeting. They even brought their plastic spears.

Anyway, the family of Jonathan, Michael, Diana, and Holly heads out to the wonderful and wacky town of NILBOG (NILBOG!!!) and begins to get in an argument in their minivan on the way there. The daughter and father fight about her boyfriend, who the father believes is a "rotten good-for-nothing" just because the kid's really stupid and hangs out with his homosexual friends all day. To break up the tension and bickering, the mom steps in and requests Jonathan to "sing that song I like so much." The song, "Row, Row, Row Your Boat" was obviously too technical and confusing for the mother to recall the name of, but that still doesn't quite explain why she liked it "so much." I would guess it's because she's an idiot, but I've been wrong before.

The family finally pulls into NILBOG (haha, NILBOG!), a town full of farmers who participate in a constant foam hat conventions, and meets the antisocial weirdos who they're swapping houses with. In a terribly scary moment of foreshadowing, the little farmer boy tosses a baseball to Jonathan which reads "Eat up before we eat you". Ooh, scary! Jonathan's family enters the house and are overjoyed to find a table full of prop food which doesn't look even remotely like anything anybody reasonably intelligent would consume. There's green biscuits, pitchers full of bright red and green liquid, and corn on the cob with green paste smeared all over it. So, being the braindead morons they are, Michael, Diana, and Holly all immediately dig in and prepare to shovel the filth down their throats. Before they can cram a single moldy biscuit into their stomachs, Grandpa Seth appears in a mysterious and shocking way (he knocks at the window). He explains to Jonathan that he has to stop his family from eating any of the food because it will turn them into goblins, or even worse, legitimate actors. Jonathan gets Grandpa Seth to stop time for 30 seconds (I really can't explain how he does it, I guess it's a perk you get for being dead) and does the only rational thing he can do to stop them from eating the food; he pees all over it. I'm not kidding. Once time resumes again, Michael takes Jonathan to his room and gives him a stern lecture that contains the phrase "you can't piss on hospitality", which is one of those lessons that you just can't learn on the mean streets of Nilbog.