Keeping Up With Jack White's Projects

Jack White is the busiest man in music, and quite possibly the most indecisive. While the last note of the White Stripes' final performance was still echoing he blasted out the first chord with a new side project. He hasn't slowed down since. The guy has been involved in efforts of every shape and size, from bizarre ICP collaborations to full bands and solo albums. Good for him, bad for people that only have a few hours each day to keep track of everything he's making.

What follows is a comprehensive roundup of all the projects that Jack White has been involved in. I'm sure he'll started up a basketball-themed bluegrass trio with David Lynch and Carrie Brownstein by the time you read this, but the list is accurate as of my filing.

Jack White asks the audience how they're doing. No music. Just sincere curiosity. For some reason the intense experience of the live performance does not come across on the album version.

White brushes his fingernails on his bright red suspenders, raising an eyebrow in a decidedly saucy manner. He sings about finding the hidden passage. He teases details of the secrets contained within. This project shows promise, but comes to an abrupt end when his drummer (?uestlove) attempts to uncover the secrets of the passage for himself, never to return. If only he had listened to Jack White's lyrics, which clearly state that one must carry an ear of corn as payment to be allowed back to the normal world.

The concept: It sounds hilarious when you speak into a spinning fan. 43 minutes of evil laughter and variations of "Luke, I am your father". 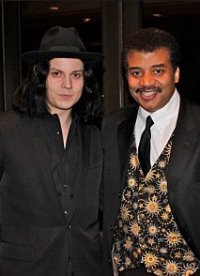 Only appears as a live show. Jack White and Meg White don long fake white beards, then sit in rocking chairs in front of an elaborate set of a log cabin. They smile kindly, whittling away on small blocks of wood. Occasionally the duo hands out candies and quarters to members of the audience, winking and asking the recipients not to tell their parents how their grandfathers are spoiling them.

A series of recordings in which Jack White covers Henry Rollins' spoken word performances. Worth listening to, if only for White's impression of Rollins, which basically sounds like an Irish pirate.

An incredibly futuristic multimedia experience. Only available for IBM-compatible PCs that support Computer Disc technology. It begins with a black screen. A perfect recreation of the theme from the 1960s Batman television show plays. "Nana-nana nananana na... CAT MEMES!" As the last phrase is sung, a poorly compressed bitmap of a cat motivational poster appears on the screen. This repeats approximately forever.

This one is weird. Jack White is a collection of musicians who are not Jack White. Jack White did not write any of the music, contribute any performance, or have any part in the production of the album. It is, however, a sanctioned official Jack White project.

With each release, Jack White sits down to record a new score for one of his favorite movies. Liner notes recommend that the listener times the beginning of the album to match up with the start of the film. It quickly becomes apparent that Jack White's version of a score is simply strumming a heavily distorted D chord every time one of the characters speaks, drowning out the sound of their voice. No other music plays at any other time. So far the following films have been scored: Garfield 2: A Tale Of Two Kitties, Little Man, Psycho (the remake).

Jack White and Meg White don long fake white beards, then sit in rocking chairs in front of an elaborate set of a mine. They smile kindly, whittling away on small replicas of mines with miniature pickaxes. Occasionally the duo hands out canaries and gold to members of the audience, winking and asking the recipients not to tell their foremen how the miners are spoiling them.

An Evening Of Tuning My Guitar

Featuring very special guest Barack Obama. Jack White strums as he adjusts a string, glancing at the president for approval. Obama nods when he thinks a string is in tune. When they have completed all six strings they test the accuracy of his hearing against an electronic tuner.

An album featuring Jack White, Josh Homme, David Byrne, and Beck in a unique combination of seemingly incompatible styles. As if the lineup wasn't interesting enough, this record is of particular note due to the recording process. The supergroup played their entire collection of songs in one attempt, standing in the woods over half a mile away from the microphones.