Bad News for Some of You

The wonders of the paper process!

Anyone who is anyone or perhaps a worm of some kind has noticed the recent trend of people touring paper mills to capitalize on the free and enlightening paper samples that they hand out at the end of the tours. It is really a very simple and yet educational process, paper making. First, they start with big old trees that have outlived the coming of the steam ship and also Jerry Falwell and they cut them down until they are dead and chop them up into tiny bits. They then soak the bits in caustic and disturbing chemicals until the wood gets all mushy and soggy like grandma's skin. Then they chop up the mush with some machinery that is designed to chop up woody mush in an efficient manner. At this point, they mix all of the mush together in big vats and bleach the shit out of it so as to make white paper instead of grey paper. There are separate vats full of dyes for things like yellow paper and that purple and blue and faggy pink paper that fifth grade girls use to draw unicorns and hearts on and that gay men use to shove up their butts. In all of these vats are really sharp blade-things that churn the slurry to make it more or less uni-slurry. That's some nifty slurry.

When the mushing and stirring is complete they strain out all of the pulpy goop with screens and sieves and press it together in a giant steam-press thingy until it is very flat and all of the chemicals are either pressed into the woody excrement or run off into the rivers and lakes in a toxic stream of death. They have a lot of quality-assurance testers who examine the sheets that result from this process to make sure that the paper is of uniform flatness, transparency, and consistency so that when Johnny Hipster needs to make his resume in order to work at the coffee shop and suavely pick up chicks with dyed black hair and thick glasses he will do so on only the finest of paper products. They also make things like covers for vinyl records so that the same hipster retards can go home to their candle-filled apartments and listen to their "Melt Banana" drivel and claim that they are hearing music in its highest form. Hipsters all across the world should bow down to paper mills. Or commit suicide. Or watch "Operation Dumbo Drop." Whichever. 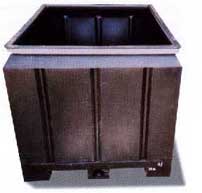 The wonders of the paper process also include vats of all shapes and sizes! VATS!!

The wondrous process of paper-making does not end there. After the paper is pressed by large and heavy pressy-things into sheets it is cut by enormous knives so that it is a certain size in order to fit in your dumb printer or your dumber journal in which you make shitty drawings of people screaming and gothy, lame, dead trees or whatever. HAHA, pathetic and depressed journal-jerks. In any case, if the paper is meant for a spiral notebook it is punched full of holes with giant hole-punchers that could stab similar holes in your skull without any effort whatsoever (or at least, not much effort because I saw them stab a guy's hand once and it just sort of cut him a little bit). Those hole-punchers are pretty strong. After this it is stacked into piles of a certain quantity so that when you are at she store buying your paper you can buy a set number of sheets and not have to count them by hand. Such are the wonders of technology and progress, my friends! To top it all off, the entire paper-making process creates a noxious smell resembling the fetid ass-crack of a long-dead wino who was repeatedly kicked out of the methadone clinic for pedophilia. If there is a paper plant within 30 miles of a town you can smell that baby from under water, believe you me. Smell it like you smell your sister's underwear when she's not home. Wait.

I thought that going on a tour of the paper factory would be a good idea. I thought that it would be cool and perhaps even radical to the max to be like all of my friends and learn about the amazing world of paper and paper products. For example, I had no idea that they could make boxes from the same paper that they made airplanes out of. I mean, that is incredible! I also didn't know that airplanes were made of paper, and I have to say that it's good that I didn't know because if I had known I would never have gotten onto the damn things. Paper, I have heard, is highly combustible and can blow up at any time when exposed to flames. No wonder all of those people blow up in planes all of the time. It's the damn paper. But sometimes they don't blow up and I suppose that that's the important thing to remember when you need to get from place to place in a hurry. I just think to myself, "You know, sometimes they don't blow up in papery infernos." Also, it's possible that the planes that do explode are made of that cheap Malaysian paper instead of paper produced in the good old USA #1. 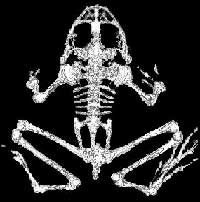 Rich looked like this after the rescue people pulled him out of the vat. Only he wasn't really a frog. And he was in a lot of pieces.

In any case, I should never have taken the tour and I should never have suggested that we go as a romantic getaway instead of going to some tropical resort or something equally horrible. To make a long, sad, pulpy story short, Richard the Lambhearted Kyanka and I went to the booming metropolis of Kansas City to tour a couple of these fascinating facilities this past week while most of you were gorging yourselves on steroid-filled fowl. We were standing on a walkway that overlooked a lot of the larger chemical vats that the plant contained and Rich suddenly took it upon himself to begin impersonating the late, great Dick Clark. Needless to say, one thing led to another and before I really knew what was going on, he tumbled head first over the tall railing and into one of the chemical-filled vats full of stirring knives 30 feet below.

I was horrified (I guess) and I rushed (sort of) down the plant's 68 steps and two ramps in order to dredge him out of the vat myself, but the plant workers held me back, saying that the chemicals in that vat would turn my skin into liquid. The tour group that we had come with was taking pictures left and right and they seemed very happy about the situation in general. This is probably because shortly before going on the tour, Rich had made a very loud announcement to the group stating that they were all disgusting, ugly people and that he would sooner be swimming in one of the large vats of chemicals and stabby knives and pulp than have to spend one minute looking at them. When he fell over the side, there was a general scattering of applause and some loud cheers and whistles. I think that there was some crazy Irish man there who started dancing a jig and saying that he would buy drinks for everyone. He took out a flask of whiskey and chugged it down right there. What a silly guy.

I tried to rescue Rich from the paper vat, I really did. I went down into the plant until I was sort of close to the vats but the smell of the fumes was so bad that I couldn't get very close (I had a bit of a headache and stuff), so one of the people who worked at the plant brought out this crazy forklift-crane thing and he starting digging around in the vat for Rich's body. He didn't find very much in there. By the time he was able to pull out any pieces, what was left of Rich sort of resembled some half-eaten fried chicken that had been rotting in the sun for a week or so. Only there were human hand bones and parts of his skull and things in it instead of chicken bones, but you know what I mean. He looked pretty gross and stuff. And he was very, very dead. The forklift driver was pretty upset, but he calmed down after he realized that it had been Rich who had fallen in and not someone else.

I sort of feel like it's partially my fault that Rich fell into a large paper vat because it was mostly my idea that we take the tour in the first place. Rich had wanted to go to a pork plant instead because he really likes to eat pigs and their various parts, but it was I who insisted that a paper tour would be more educational and we'd get free paper at the end of it. I feel a little better about his death because I know that his spirit will live on in our hearts or whatever and that his skin probably made some very high-quality paper. I decided to tell you all this sad news in my update today so that you will know that Rich is dead. I am now inheriting exactly $2,471,350.17 as a result of his death. This is because shortly before the tour I took out a fairly large life insurance policy on him that guarded against falling into large vats full of knives and chemicals at paper mills (what a crazy coincidence). With this money I will build a new paper mill that I will name after him and some hamburgers. Rest in peace you sweaty maniac, you. You will be missed (a little).

The friendly / not-so-friendly / robots in disguise workers at giant megacorporation State Og have updated once again, providing the hottest and freshest inventions since that Albert Jefferson guy invented the lightbulb or the Declaration of Independence. Check it out, yo:

Congrats go to Kay Brewer from Michigan for becoming the first winner on State Og's "Who Wants to Marry a Celebrity" game show! Kay beat out 15 other eligible ladies by correctly answering a question about everybody's favorite cat-eating alien from Melmac.

After much ballyhoo and foofarra, it was time for her to meet her new celebrity husband, none other than legendary movie star John Wayne! Despite being dead for several decades, the Duke looked great as his coffin was wheeled in following its recent nighttime exhuming. The wedding was performed on live TV as a catatonically ecstatic Kay was joined to the rugged star of many a western. Despite a small mishap when the Duke's ring finger broke off and oozed foul smelling ichor on the bride's virginal white dress, the ceremony was breathtaking. There was not a dry eye in the house, except for the groom's, as both of his eyes are desiccated husks. Finally, the blushing / thrashing bride was gracefully packed into the bridal casket and her bloodcurdling screams of joy could be heard for miles as the lid was nailed shut. State Og cannot guarantee a perfect marriage for this happy couple thanks to some setbacks in our Destiny Device, however we feel this union shall last for eternity.

But wait - there's more! As mentioned in the previous sentence, "check it out, yo." I don't know what that means; I believe it's hipster slang for "I'm pregnant."