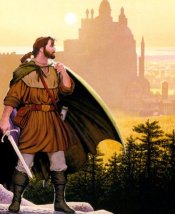 (Disclaimer: The article below is not bold in any way, shape, or form. It also does not contain any tales of adventure. Pregnant woman past their 2nd trimester should not read this article due to the risk of birth defects. Dry clean only.)

Hark my young internet goblins, I have returned to you from my perilous journey to strange far-off lands without any major injury or tales of forced sex (sadly). Indeed my road was full of peril, yet I persevered through the help of friendly strangers and horrendous amounts of alcohol. Before departing from my native realm, I had many misconceptions about the countries I was about to visit. I must say now that I’m a bit wiser about our neighbors to the East, and maybe I learned a little something about myself in the process. In order to share my epic quest with you fine folks, I've kept a detailed journal, leaving nothing out for the integrity of this record. I invite you to relive this most extraordinary of expeditions with me as we explore the strange and queer lands of England, Scotland, and the airport in Germany. Enjoy!

9:41 PM. I sat around all day in my Go-Bot pajamas eating Stouffer's Pizza and watching a Murder She Wrote marathon. Before going to sleep, I'm going to pray to the holy icon this the trip will be a success.

10:42 AM. Had a wet dream about Angela Lansbury, surely a sign of good things to come. Alas my pjs are soiled and I don't have time to wash them before the flight. I make the decision to leave them behind and sleep in the nude like most of the barbarians in the lands I was about to visit

10:44 AM. Stubbed my toe on table while walking to the bathroom. Cried a lot. Almost called off trip, but decided to forge ahead.

4:05 PM. Cab took me to Detroit Metro Airport. I had to walk through security and they took away my special edition "Dark Justice" nail clippers. I wanted to protest but was intimidated by their uniforms. Right now I'm waiting for my plane. BORED!

4:25 PM. Mugged! I went to the bathroom to take a poo poo and was robbed by this guy that looked like Biggie Smalls, only not dead. He stole all my cash and my spare socks! Good thing I had my traveler's checks in my money belt. I can't wait to get out of this godforsaken country!

6:44 PM. Fell asleep and missed plane. Waiting for next one.

8:30 PM. About to board plane headed to London. Gosh I hope I don't crash into the ocean.

Well it's only a six hour flight...shit! 6:02 AM. (+5 hour time advance). I think there must be a screaming baby fair going on in London, because my plane was full of them. I was seated on the middle of the plane, flanked by two voluminous lumps of humanity whose flabby extremities served as my armrests. To complete the pervading sense of claustrophobia, the person sitting in front of me reclined their seat until my face was mashed against the plastic backing. It was a deathtrap. I tried to get drunk off 8 bottles of the complementary beer, yet only succeeded getting ill. I climbed over my huge neighbor, and ran to the bathroom to throw up, but all the bathrooms were in use! So I grabbed the closest thing to me; the in-flight meal cart. Nobody was the wiser.

8:17 AM. Just got out of the London "Tube". That's what they call the subway system. It sucked. There were so many people down there that I lost my bearings and didn't know where I was. Back in the States I would just threaten the nearest hobo for directions, but it was such a clean city that no hobos were in sight. Thankfully I found somebody that spoke American, and they helped me get to the right station near my hotel. I plan to stay in my room for a while to rest after the long night of travel.

9:05 PM. Stayed in my hotel all day watching cricket on the telly (TV) and touching myself. Cricket is a lot like baseball, yet more retarded. Since I got a lot of rest, I'm about to get ready to check out London's night life.

11:50 PM. England is pretty cool. I found this club called the "Captain's Mast", and thought it would be a "high seas" theme club. But It looked just like a normal club - music, disco ball, and of course, drinking. After awhile, I noticed that there weren't any females. Strange indeed, yet I decided to stick around and have a couple more fruit breezers. Then a very fit young lad approached me and we became engaged in a very interesting conversation. After explaining my tight money situation because of the mugging in Detroit, he kindly offered an invitation to stay at his apartment for a few nights. Of course I accepted.

11:25 AM. Went to see the changing of the guards at Buckingham Palace. It fucking sucked.

1:00 PM. Had some fish & chips at the Sherlock Holmes pub. It tasted great, but I was ejected from the establishment after I asked the serving wench to bring me an ale. I guess they don't like to be called 'serving wenches' anymore.

9:13 PM. I'm lost. I just can't figure out where I am. It's starting to get dark and I'm scared because of all the stories about Jack the Ripper. I want my mommy. But I remember that in the movie Mary Poppins the chimney sweep helps the children find their way when they got lost, so I'm going to try to find one.

11:10 PM. I CAN'T FIND ONE CHIMNEY SWEEP IN THE WHOLE GODDAMN CITY! 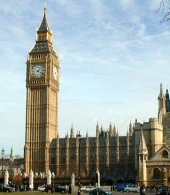 I didn't see this.

7:34 AM. Last night sucked. I ended up sleeping in the fountain in Hyde Park. This turned out to be a bad idea because it was full of water and I got really cold. I think I caught the black plague or something. Anyway, I'm totally sick of London so I'm about to take a train to the town of Salisbury. Hope they have good steaks lol.

9:02 AM. I'm on the train just looking at the rolling hills and thinking. While doing so, a revelation dawned on me that my face is made of meat. Like the same stuff that's in the sausage I eat every morning. My face is just one big hunk of red meat. How much would my face fetch at the butcher? I'm thinking 40 bucks. $35 at the least.

Noon. Now this is my kind of city; small, and full of history. I'm just kicking back in a old pub called The Haunch of the Venison drinking some pints of ale. They're about 2 pounds each. A pound is what they call their money even though it does not weigh a pound, more like an ounce. I think in the time of the knights and dragons, the coin actually weighed a pound and was made out of the bones of defeated foes. I miss my computer.

2:00 PM. Still at the pub drinking pints. This stuff is excellent. The next round is for all the folks back home.

4:18 PM I amm so buzzed right now it's not even funny. I'm jus having one more pint and that's it!

8:76 THE MOON. oh ifeeel soo ghood rite now like a birdy flying in theski. I LOOVE U ALLL!

10:35 AM. Oh man! What the hell did I do last night? All I remember is having a few pints, and then I woke up in local constable's jail cell. They told me that they found me at the old abbey having a sword fight with a suit of armour for a princess or something. I was totally naked. They were cool about it and I only had to pay a 15 pound fine. 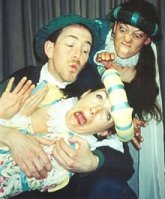 These are typical English people.

9:56 AM. About to take a train to Oxford, but eating breakfast first. This English breakfast is really heavy. I mean, having smoked salmon in your eggs is one thing, but pouring baked beans on top of it is a little much. Before this trip is over I'll be a chubby little piglet.

2:20 PM. Well I'm in Oxford, and spent a lot of time looking for J.R.R. Tolkien's house. I'm a big fan of his books and wanted him to autograph my Lord of the Rings special edition key ring, but when I finally found it, the people living there said he'd been dead for years. I was sure this was just a tactic to get rid of me so I pretended to leave and then snuck in the back door. I had to move fast so as not to get caught, but I managed to snag an oven mitt. This is probably the same oven mitt Tolkien uses everyday to get the cookies out of the oven. I could probably sell it on ebay for a lot of money, but I'm keeping it for myself.

5:45 PM. Bad gas. Must have been the baked beans at breakfast.

9:50 PM. I thought the nightlife would be really hopping since there's a million colleges here, but I guess it's exam time so all the students are acutely studying. This is a foreign concept to me. If I ever needed something done, I would get one of my various minions to do it, or just bribe the teacher. English students are nerds.