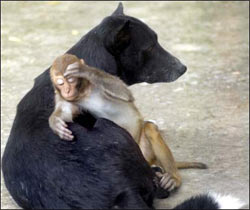 Contrary to what many will tell you, the four scariest words you could possibly hear yourself muttering are not "fire gun at me," they are "we should live together." In what might prove to be the best or worst decision I've ever made, I let it slip not too long ago, and have been preparing for the consequences ever since.

My first sign that this was going to be an eventful undertaking showed it's stupid face last weekend after I'd decided to check out some new apartments. Some folks may remember that I'm currently living in two broom closets separated by a hallway which happens to lie at the exact point in the universe where all creaking and banging sounds ever generated meet up to discuss how my apartment sounds like two Home Depots fucking. It's also really small, so I could use a new one.

I decided to go with Craigslist to start. It was a different feeling for me, because over the last year I hadn't been to Craigslist for anything but to create fake ads from guys looking for ludicrously strange sexual encounters. Unfortunately, they tend to get removed because the integrity of the "casual encounters" section must be protected.

Looking around for apartments online was a good idea in theory, but I had to go and get my hopes up over a really excellent looking house for a very attractive price. "Come by anytime on Sunday from 9a-4p for an open house!" Why the heck not?! Rather than calling or emailing them or anything logical like that, I put some slippers on and went over there. I liked wandering around the front yard for the minute or two I did. The place was pretty cute, it was a little pink house with white rocks instead of grass and probably the best looking screen door I'd ever seen. It was seriously cool (the screen door). Through the awesome door I could see that a slightly tinier and slightly better looking Lou Albano walking toward the door in a goddamned huff telling me to "Go away, it's not for rent! Someone's playin' a prank on me! They put me on the Internet!" Well you'd better believe I got the heck out of there, I wasn't about to mess with no dude who already had a rage advantage on me due to being pranked to the moon and back.

Anyway, if it sounds like I'm freaking out, I'm not. It's going to be great. There are up to 6 different perks that come with having a girl at your house all the time, but aside from all the mountains of preparation (for example-- cleaning, organizing, washing my hair) there will be certain things I do now that I won't be able to in a shared household:

That last point is of particular worry for me, as I've been subsisting just fine on my diet of microwaved chicken nuggets and Foreman grill burgers for well on 11 months now. I suppose that in a month or two, once everything's changed, I'll be eating things like salad and fresh vegetables every day. I'll have you guys know right now that I tried getting fresh vegetables when I first moved here on my own, but it was terrible. I'm guessing those weird-ass squash things they sell out in front of Trader Joe's aren't actually supposed to be eaten, because they have the texture of watered-down Play-doh and taste like metal. I don't know who Joe is but he definitely needs more trading practice.

I spent some time in my kitchen last night, trying to figure out exactly what I could make right then that I wouldn't be able to make a couple months down the road. This is when it hit me: I have never made a burger that I couldn't finish in one sitting. Call me a glutton if you want, I don't care. I was burgin' hard, and this was to be my burger gluttony swan song. Digging out my trusty, disgusty, baby-type Foreman grill, I decided to not cook a single burg-- I set out to cook a 5-patty meatropolis.

George Foreman Jr. and the first burg patty off the grill.

The first four are done, but wait, I need a bun! Wait, what is this?!

Pizzabun invention completed, and the finished meatopolis.
...then what happened? Well, upon first touch my hands got so incredibly greasy that I didn't want to touch anything electronic to type or take more pictures until I washed up with 2 different kinds of soap. Long story short... I couldn't finish it. The final 1/3 of it is in my refrigerator, never to be eaten. I packed myself so full of the horrible cold pizza/warm burger meat/orange and pink grease combo that I never want to taste anything like it ever again. I feel like my body is rejecting the food inside me as if it were a pig kidney. Right about now one of those horrible bastard-pumpkins sounds lovely.

From now on, burgin' is for the birds. I'm going to go sleep for a little bit now.