Wastes of bandwidth (in addition to this site)

Cliff Done Gone and Do It!

Petition For an Image-Free Internet

One of the biggest problems currently clogging up the congested and lard-filled arteries of the Internet is the sheer bulk of painful images floating around. Think back to the "good ol' days" of the online world, which of course never existed. The "less bad" times, however, took place back during the early to mid-1990's, when the Internet differed from its current incantation in the following ways:

1) Everything was free.
2) Everybody made money, no matter how mentally deficient they were.
3) There was no monkey to punch.
4) THERE WERE A HELL OF A LOT LESS HORRIBLE IMAGES.

Back then, people had very light webpages, often with only a couple pictures consisting of animated gif horizontal line breaks and list headers. Out of those two categories, the only images used were the dripping-blood line and the gradient sphere header, so the combined file size of 10k was easily cached. However as time progressed, bandwidth increased... and as bandwidth increased, the sheer number and size of pictures used grew exponentially. Now I have no problem with graphics in general; heck, Cliff Yablonski's site is practically dedicated to them. I do have a problem with the brain-shatteringly awful quality of these images floating around. Since there's no real way to judge and enforce a subjective quality rating of images on the Internet, I am hereby petitioning to ban images entirely. Let me provide a few examples of the disturbing and horrifying things I'm talking about. 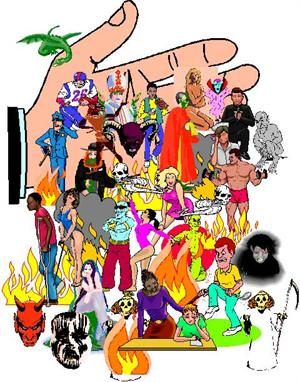 This image comes courtesy of yesterday's ALoD, which was an insane Christian art site run by an insane Christian non-artist. This picture is supposedly what she thinks hell is like, as she has entitled the page "burn forever with satan in HELL," which was coincidentally the theme of my senior prom. This image brings up a couple critical questions:

1) Why are these people in hell to begin with? Amongst other unlucky victims, you'll notice that the following people / races / creatures are damned for all eternity:

That's a good cross-section of creatures right there, so I imagine hell is a pretty crowded place, much like the Rally's in Raytown, Missouri. Maybe the policemen made a pact with the Devil to persecute the criminal handicapped black people who sell crack to football players and their trophy wife floating heads, which run a crime syndicate with the genie / gymnast underground Rabbi dragon fanclub. That's my guess.

2) What's with the huge hand in the background? Whose hand is that? You'll notice by his cuff that he's wearing a suit, so I assume that a giant white businessman is in charge of running Heaven. This is scary in itself, because that means heaven probably offers stock options which means heaven has a trading market which means there is a lot of sweaty balding men running around a crowded room and frankly that doesn't sound appealing enough to keep me from ever murdering somebody. 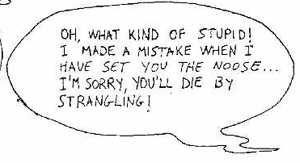 Now I've never professed to being an English scholar, but you'll notice that I have never tried to speak a foreign language like Japanese or Canadian on this page. Why? Because I would fail and my site would look like I slipped and knocked over the Babelfish webserver. Stick to your native language, folks; bad translations are for Japanese videogames, not Internet pictures. In the case of the example above, that native language would be listed as "Psycholian" since it's from a website dedicated to killing women and engaging in sexual intercorpse with them. Ha ha! Get it? Necrophelia is "sexual intercorpse!" Watch out, Alf, there's a new comedy king in town!

EXAMPLE 3: RIDICULOUS PHOTOS THAT PROBABLY SHOULD HAVE NEVER, EVER BEEN TAKEN 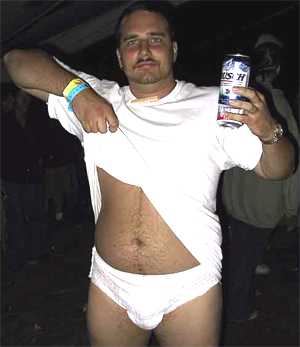 Why? Why? Why? Why would somebody take a picture of this, much less allow the photo to become publicly distributed? In case you have a Braille computer monitor, this is a grown man drinking beer and wearing a diaper. This is not an image that anybody should want linked to them or any other member of their species; this is a picture that should only be used by Police when compiling a "case against" somebody, usually something to do with sexually assaulting furniture.

EXAMPLE 4: ANYTHING TO DO WITH FURRIES 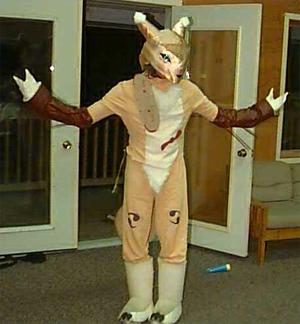 Enough said. I really enjoy this particular furry picture, as he appears to have frightening lobster claws and a weight belt over its shoulder. In addition, he seems to have just broken through the back door into some unexpecting family's home, screeching "HEY GANG, THE PARTY'S HERE, WHERE'S YOUR CAT?" Anything and everything about furries is fundamentally wrong and I openly condemn them in every way possible (and many ways impossible). The only way furries could make their outfits more stupid is by stapling 500 large penises to their suits, which would probably make them more appealing to other brain damaged furry fans who spend all day drawing images of giant gay foxes making out with trains. 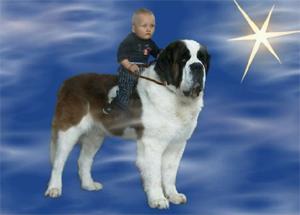 Okay, you love your child and you want him to grow up and become a doctor or lawyer or rocket surgeon or whatever. That's understandable. But please, if you truly love your child, DO NOT TAKE PHOTOS LIKE THIS. In 10-15 years from now, your child will look back at this picture and KILL THEMSELVES. It's odd enough that the bloated baby is riding a very large dog, but when you factor in the facts that the dog is floating, there's a ton of fog, and aliens are shooting some kind of distant ray cannon at them, you really enter Suicide Central. If, for some incomprehensible reason, you decide to create a picture like this, you should promptly destroy it. Then, to be on the safe side, you should probably drop your kid off at the mall and flee the state and move to Atlantis. 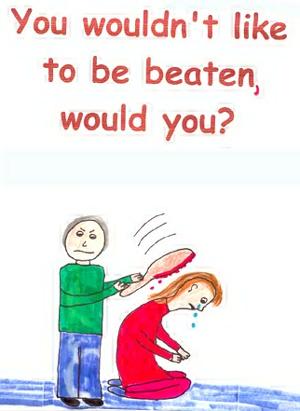 Everybody has been getting on PETA's case lately because they're a very retarded organization that doesn't hardly ever do anything constructive and has adopted a full-time strategy of "doing intensely stupid things that no sane person likes or approves of." However, many people forget to make fun of them for having an entire section of their website dedicated to brainwashing children and forcing them to make the absolute most goofiest drawings ever. Look at that picture. Some kid wearing a green barrel is beating Beavis / Butthead with a hairbrush covered in strawberry jam. They are also standing on what appears to be water, so I guess they're both Jesus. How does this make me want to stop eating bratwurst? Who knows.