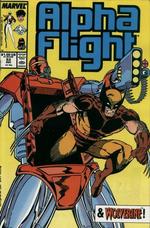 "The Empty Robot"
Alpha Flight #53
When Alpha Flight takes on its most dangerous enemy to date, Wolverine employs a tactic that ultimately decides the battle.

Key Moment
Wolverine: Hey guys!
Guardian: Wolverine, we've lost the fight. We're all badly injured. Where... (coughs up blood) where were you?
Wolverine: I'm the best there is at what I do... and what I do is hide in robots until fights are over!
Northstar: I'm gay.
Wolverine: Yeah, you told us already.
Northstar: Well, I just wanted to let everyone know I still am. Just in case anyone thinks something has changed. 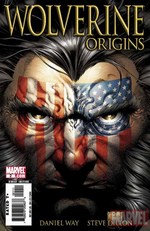 Key Moment
Face Painter: So what'll it be?
Wolverine: A dragon breathing fire on a skeleton as the skeleton rams a greatsword right up the roof of its mouth and through the top of its head, where the dragon's brains are splattering all over the place.
Face Painter: Haven't learned that one yet. I can do an American flag or a pink teddy bear holding a heart-shaped balloon.
Wolverine: Gimme the flag. 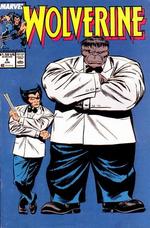 When the world's most dangerous mutant villain is spotted at a local restaurant, Wolverine and Hulk go undercover to flush him out. Will they go too deep, leaving their lives as heroes behind for the magical allure of the food service industry?

Key Moment
Wolverine: Here's your rolls, bub.
Customer: I say, why are they impaled on those horrid blades? And why are those blades protruding from the back of your hand?
Wolverine: I uh... I'm a waiter.
Hulk: HULK BRING WATER TO TABLE! (loud crashing noises) ARGH! HULK DROP PUNY TRAY! HULK SMASH GLASSES!
Customer: What is wrong with that freakish man?
Wolverine: Sorry, sir. Can't be helped, he's Italian. 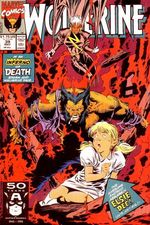 "Storm And Wolverine Vs. An Eight Year Old Girl"
Wolverine #39

She won't get away this time!

Key Moment
Girl: Please don't hurt me!
Wolverine: HAHAHA!
Girl: Why is this happening? Tell me what I did and I'll apologize! I don't want to die!
Storm: Get her, Wolverine! Haha! Get her! Yes! Haha!
Wolverine: Blehehehe! 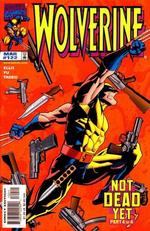 Wolverine is outnumbered by an army of ruthless assassins wielding untold amounts of firepower. Will his mutant healing factor be enough to keep him alive when his enemies start throwing their guns at him?

Key Moment
Guy Who Threw A Bazooka: Wait a second, it didn't work! What in the sam hill is going on here?
Wolverine: Was that the best you could do? Say your prayers, bub. (unleashes his claws with a signature *snikt* sound)
Guy Who Threw A Shotgun: Three years of training... all for naught!