The Clawmen arrived with fierce intensity from glowing portals as big as barns but made out of light and energy instead of wood. The portals were connected to some far away place that was strange and alien. They did not lead to the inside of barns but who is to say since no one ever ventured through them. The Clawmen also came from cracks in the ground and from the bottoms of lakes and oceans. Whenever you looked somewhere, a Clawman would show up and you would have to stop looking there and run for your life lest you be crushed to death by its merciless claws. 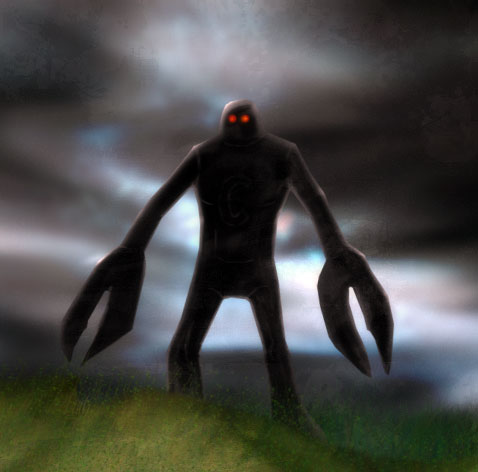 They were called Clawmen because of their menacing claws, which they used to claw things. The goal of the average Clawman was to crush as many things as possible with his great and terrible claws. Also the only word they spoke was "claw," which they repeated with every movement in a booming robot voice.

Everyone knew when the Clawmen first arrived because within minutes the major cities of the world were reduced to rubble. Those lucky enough to not notice the Clawmen firsthand eventually found out on the news. Intrepid reporter Bert Lightning reported live from the scene of many Clawmen attacks and showed the world the terror of Washington, D.C. getting crushed to bits between the claws of the Clawmen. The President of the United States of America was squeezed until he exploded guts everywhere and the whole world saw it, at least the parts of the world that could still see and had TVs (and they were few).

Bert Lightning was nearly clawed to death himself, but he got out and he joined the underground of human resistance fighters - brave men and women who slipped through the cracks of the Clawmen's claws to fight another day. They also had a few dogs and horses and cows. They lived in underground bunkers that the Clawmen did not know about.

On the surface things were not going so well. Armies shot bullets and bombs at the Clawmen, but nothing hurt them. Even nuclear weapons did not harm the Clawmen, who shrugged off the explosions and kept clawing. They just kept clawing at everything, including hope. Soon there were no armies left. There were no communication systems left to use. The telephones did not work and the Internet was gone. The Clawmen had cut the wires and were rapidly clawing at mankind's throat.

People abandoned the cities and fled to the countryside and forests. "There is nothing for them to claw here," people would say as they joined the long streams of refugees snaking away from the giant smoke and dust plumes they once called home. But they were wrong! The Clawmen would claw them in time, and there was nothing that could be done.

After the cities were gone, the Clawmen first took to the forests and viciously crushed many trees and rocks. They crushed waterfalls and rivers and animals. They stayed very still so that birds would land in their open claws, then they would crush the birds. Clawing was as important to them as breathing was to us. Maybe it was even how they breathed since they had no mouths?

When they moved to the open country their progress was slowed. There were no big things to crush so they took their time crushing blades of grass and clumps of dirt. But there were so many of them and so little else left to crush that it was only a temporary slowdown at best.

In one of the bunkers (Bunker X it was called) some survivors gathered to discuss the future - a future they hoped would be free of Clawmen.

"I am called Dirk," said a scientist (whose full name was Professor Dirk Gold, though he did not like telling anyone this because his wife was crushed and saying his last name made him sad since it was also her last name). "Their claws are made out of a metal not of this world."

"This world?" asked Bert Lightning.
"Or any world we know of!" added Dirk.

"How can we ever stop them?" Bert asked, cutting to the heart of matters as any good reporter should.

"If there is a way to stop them, we will find it," Dirk replied. He pointed at a glowing energy ball and added, "We have all sorts of science at our disposal here in Bunker X."

Twenty years passed and still there was no way to stop the Clawmen. Bert Lightning had grown old and died, as did Professor Dirk Gold. Their children carried the torch of humanity in longed to light the darkness left by the Clawmen. They had lived with many other young adults in Bunker X and had not seen the outside world ever.

On one fateful day Bert Lightning Jr. and Professor Dirk Gold Jr. were hard at work in a lab in Bunker X, tinkering with a giant machine they hoped would save the human race.

"Just some slight adjustments to the calculations," said Dirk Gold Jr. as he franticly turned some knobs on the machine, which was shooting lasers at an energy ball the size of a giant pumpkin or a beanbag.

"That is what you always say!" snapped Bert Lightning Jr., who was taking notes on his pad for the Bunker X newspaper he reported for.

"This time I've got it!" trumpeted Professor Dirk Gold Jr. He slammed on a big red button and then the power went out and the energy ball fizzled into a tiny spark and faded away.

"No!" he screamed. "That was our last energy ball!"

"That wasn't me, stupid! All of Bunker X is without power, not just this one lab!"

But then something happened that no one expected! The ceiling of the Bunker X lab opened up, peeled back like the top of a sardine can. Except this was no sardine can, this was the last refuge of human beings. And human beings are no sardines. It was the Clawmen. They had clawed so much of the world above that the Bunker was now dangerously exposed.

"My God, the Clawmen! They look just like our fathers described," shouted Dirk Gold Jr., with eyes as big as the energy balls he spent his life working with.

"We can't let them claw us!" Bert Lightning Jr. yelled in a frightened but determined voice.

The two quickly ran out of the lab into a hallway. But the Clawmen were trailing behind, peeling the ceilings away like they were concrete bark on a concrete tree or the concrete peel of a concrete banana. Along the way they would grab up other Bunker X citizens and claw them. There were screams and sounds of metal scraping against concrete and things exploding and blood gushing out of eyeballs when the Clawmen would squeeze down on soft human bodies.

Bert and Dirk ran until they were cornered in the Bunker X gym, the site of many basketball games and memories. They were trapped. A lone Clawman advanced on them. Claw... Claw... Claw.

"So long old friend! I guess we can finally rest easy when this is over."

The hulking alien monster advanced slowly on them, and soon other horrible Clawmen appeared behind it. All of them advancing slowly on the two heroes.

When the first Clawman was mere inches from being in reach of them, something amazing happened.

"Look!" said Bert Lightning Jr. "The Clawmen are clawing each other!"

It was true. They had clawed so much that there was so little left to claw. They did not want to share or claw secondhand scraps amongst so many. They wanted to claw something big and new and there was nothing like that left on the planet. Soon all the Clawmen were viciously clawing at each other, all over the country. What else was there for them to claw save for a scant few survivors and the ruins of a bunker?

In other countries the Clawmen suddenly turned on each other. A line was crossed and that sent them all over the edge like a train engine driving off a cliff. Now no Clawman could ever trust another Clawman. There was a rich new world of clawing to be had for them all, claw against claw. Could claw unclaw claw? The Clawman mind struggled to claw the full extent of such exciting new concepts. Claw... Claw... Claw.

And deep in space on the Clawman homeworld of Clawmania the Clawman Empire began to crush itself. The Clawman King found his throne and crown clawed off and crushed by his once loyal Clawmen subjects and it was war. A war against all Clawmen declared by the Clawmen themselves.

And back on Earth the dust was settling as the survivors were slowly returning to the surface, seeing for the first time a world of finely crushed sand and the crushed remains of the mighty Clawmen. They had crushed everything and when that wasn't enough, they crushed themselves.

"What a mess" said Dirk Gold Jr., looking at the vast wasteland before him.

"It's the prettiest mess I've ever seen," said Bert Lightning Jr., as he admired the hazy sunset in the distance and the glowing silhouettes of bent and broken claws. "We've got a new world to build. And this one, Dirk - this one won't be crushed by any claws."

After twenty years, the world was at last free of the tyranny of the Clawmen. A new world would rise out of the dust and finely crushed debris. A world without claws and crushing. A world of hope and potential.