The Ghosts Ate All the Stuffing

Another Thanksgiving ruined by hungry ghosts.

The holidays are almost upon us; a time for gifts, food, cheers, and tears. Why am I doing an article about Thanksgiving so early you may ask? Being the almost insanely retarded evil person that I am, I've decided to jump the gun and do a Thanksgiving article early in order to ruin any chance of another writer doing one next week without seeming unoriginal and stealing from my great and inventive comedy masterpiece idea. I'm pretty sure that if I time things right, I can do the same thing for Christmas and probably Easter as well, ruthlessly dominating the holidays until Richard “cold hands, warm heart” Kyanka has my legs broken again. Regardless, it will be worth it for the chance to tell you good people the true history of Thanksgiving that have been distorted by the Freemasons and Fox News. In order to fully get into the Thanksgiving spirit, I am going to be writing wearing only my buckle hat while halfway submerged in piping hot turkey gravy, and stabbing myself face with a large fork. Enjoy!

The True History of Thanksgiving

Bible Age
Way back in the time of the Bible millions of years ago, Jesus was hanging out with his talking dog Abraham on the beach of Israel looking for some crazy adventures. Widely regarded as the Lorenzo Lamas of his day, Jesus wasn't afraid to tangle with the cruel Romans or the Jew-eating Kraken in the Dead Sea. On this particular day, Jesus was walking on water while carrying Abraham so he didn't have to talk to all his fanboys that flocked behind him wherever he went. Just then a giant whale came out of the sea and swallowed Jesus and Abraham whole. Into the great mammal’s vast stomach they went, splashing down into the murky depths. Jesus realized they had gotten themselves into quite a pickle this time. Abraham suggested that Jesus should light a match so they could observe their surroundings and perhaps find a way out of this mess. Once Jesus lit the match, they saw that they were not alone in the cavernous belly of the whale. 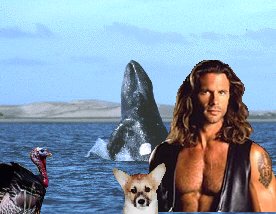 Jesus and his wise cracking dog, Abraham get into yet another high voltage action packed adventure.

Next to them was a rather inquisitive looking turkey that must've shared the same fate as our heroes. Like Abraham, this turkey was a direct descendant from the elder race of animals that inhabited the Garden of Eden, so he was also blessed with the gift of speech. The turkey told Jesus that it had been trapped in the whale's stomach for over a week, but he found a way to control the whale by pecking on the certain parts of its brain. They traveled to the brain cavity where the turkey pecked on the frontal lobe making the great beast change course. Once they came to land, the whale opened its gaping maw, and Jesus, Abraham, and the turkey walked out onto dry land. But it was a trap! The diabolical turkey had guided the whale to the city of Rome where the Emperor had waited for his dastardly plot to come to fruition. Jesus and Abraham were captured by the Romans who crucified Jesus and shot Abraham into the sky where he exploded into light, becoming the canine constellation. A few months later on Easter, Jesus was resurrected as a chocolate bunny and spread joy throughout the world by distributing baskets filled with brightly colored eggs and jellybeans to children. The turkey was awarded with 30 pellets of grain for its evil deed, and was made the honorary guest at the coliseum event featuring lions getting killed by gladiators. Ever since, Christians have remembered that day on Thanksgiving by killing a turkey for its treachery, and watching the Detroit Lions get their ass handed to them.

1620
Many years later in the age of colonization, the white man stumbled upon America, a large continent full of rich resources and beautiful countryside. Unfortunately, the land was already inhibited by the Indians, a race of savages that didn't know how to read or write and shot lasers from their eyes. The whites where horrified to learn that the natives knew nothing about Thanksgiving or any of the great Bible stories. The kindly caucasians tried to teach the ADD inflicted Indians and correct their flawed thinking, but they turned out to be very poor students. For some reason they still wanted to believe their totally ludicrous religion that revolved around the spirit world and mother nature, instead of converting and believing the Lord and the tales of him creating earth in seven days and smiting the gays with lighting bolts. This religious rift between the two led to war, and by "war" I mean that the whites attacked Indian daycare centers with Calvary charges and caught old men in nets so they could drop them into active volcanoes. 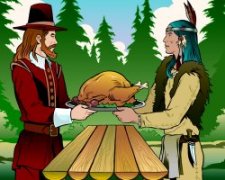 Turkey Tug-o-War. This is right before the white dude pulls a gun out of his hat and totally shoots ole Proudfoot. Owned.

1646
After many years of fighting, a truce was made in the form of a grand Thanksgiving dinner. All of the head Indian chiefs were invited, and each one brought a homemade dish from his tribe. As the dinner commenced, all differences were put aside in the spirit of Thanksgiving and sharing. At the table there was an abundance of Turkey, corn, stuffing, cranberries, squash, potatoes, bread, and some Jell-O cubes that the Blackfoot tribe made. After the dinner was finished and the Indians were fully relaxed, the whites pulled daggers out of their buckle hats and murdered them, thus leaving the tribes leaderless and falling into dissolution. The whites took over America and built a lot of Waffle Houses and Piggly Wigglys. Thanks to our forefathers' inventive Thanksgiving massacre, we are now the number one country in the universe.

1776
During the Revolutionary War, the colonists fought against the British, who always play the bad guys, even in the Star Wars movies. The war was not going well for the ill-supplied colonists, and many of the men missed their homes. George Washington (a man over 10 feet tall, and rode a giant bull into battle) was leading his men to Pigeon Forge when his drummer boy started crying. Washington stopped the march, leapt off his large mount, and asked why the little boy was crying. The drummer boy said he was sad because tonight was Thanksgiving and he missed being with his family and drinking gravy. It suddenly dawned on Washington that they had forgotten about Thanksgiving because of the war, and that this conflict was destroying the holidays. From that day forward, Washington decided to win the war as quickly as possible instead of just showing up everyday for a paycheck. He did just that, and within months the English were kicked off the mainland. Ironically, the little drummer boy was killed by a pack wild turkeys a year later while frolicking in the woods of New York.

1882
Although by this time most of the Indians were successfully converted to Christianity through smallpox or being shot in the head, there were still some renegade natives that proved to be quite bothersome. The famous Civil War hero General Custer tried using the same trick that the whites used over 200 years ago and invited the chiefs to a Thanksgiving dinner at Little Big Horn. But the Indians did not forget about that infamous day, and after the feast, they were the ones who pulled out their weapons first, slaughtering Custer and his men. President Grant had no choice but to make a truce and create reservations comprised of dirt farms for the pesky natives, but kept them supplied with plenty of firewater and game boys to distract them. In a odd twist of fate, current ancestors of the survivors now run the country's casinos, taking all the money from the hordes of gambling addicted white folk, and they still do not believe in our holy Thanksgiving day. 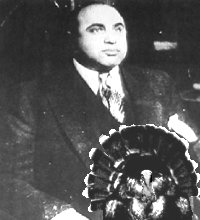 Al Capone with his Capo, Carmine "The Gobbler" Costello.

1926
President Coolidge, being the uptight dickhead that he was, outlawed Thanksgiving because it promoted drinking and horseplay on a holy day of rest. This created a huge black market demand for items like turkey, pies, cranberries, gravy, and those little butter lamb things. It also created a huge ring of underworld gangsters that were more than happy to supply the demand of the public's Thanksgiving thirsting. Ruthless mob bosses like Gino "cranberries; Gorzetti, Tony "gravy gun" Morreto, and Al "little butter lamb" Capone became rich and powerful because of the ban on Thanksgiving, and soon corruption in the metropolitan police offices run rampant. It was obvious to Coolidge that there was no stopping the American's desire to celebrate Thanksgiving, and so retracted his foolhardy law that Lincoln's ghost goaded him into making in the first place.

Present Day
As you can see, Thanksgiving has played a major role in shaping our history. True it is a history marred by betrayal, treachery, hypocrisy, and genocide, but I feel that we've learned from the past and now the holidays are a time to celebrate with family, food, and fun. Of course this excludes me because I'll be working this Thanksgiving, crying in my tiny dark room at the corporate headquarters, alone and afraid, and chewing on a cold granola bar. But you know something folks, I'm working on Thanksgiving for a reason that I think would make ole George Washington proud. I'm working so that America can stay number one in semi-reliable car products and exports, so that our children will have a bright future ahead of them. I am working for freedom. Freedom for the small children in Iraq that have never tasted White Castle chicken rings. Freedom for Jessica Lynch who I would still bang even though she's used goods. Freedom against the terrorists that would take it away. For that my friends, I will give up plate of turkey and an afternoon of watching the Lions suck ass. God Bless and have a happy holiday.

(Also, if you remember, could you please send me an e-mail on Thanksgiving? I will be just sitting in front of the computer doing nothing so some human interaction would be nice. Oh sweet Jesus I'm lonely.)

Hi folks, Dennis "Corin Tucker's Stalker" Farrell here with the newest edition of State Og. Recently I've seen State Og referred to as "the most evil company in the world", which could not be further from the truth. In fact, State Og is a conglomerate. The last time we were puny enough to be considered a company was five mind-controlled presidents ago.

Enter: Og Beer Byproduct. It's like beer gave birth, and you're drinking the liquified placenta! Our beer-ish product tastes so great that it's practically fit for consumption! Did someone say "awesome"? Or are you just hearing things? Are you even sure you're really awake?