Inventions of a Lifetime! 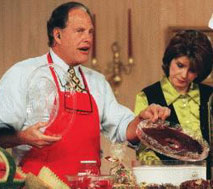 My 23 years on this planet have taught me a lot of things. Some of these things include that you should take the pits out of the cherries before eating them or else you'll get cherry trees growing in your stomach, that you should always wipe from front to back or else you'll get cherry trees growing out of your privates, and that just because a child is mentally handicapped in some fashion does not mean that he or she should be sent to a special Retard Farm to live the rest of their retard lives pitting cherries and wiping from front to back. I realize that this knowledge that I have acquired is but the tip of the wisdom iceberg and so I am on a constant and vigilant lookout for new ideas and things of interest that I might be able to either ignore or exploit depending upon their seeming worth to me at the time. I am sure that I am not the only person in the world with this healthy attitude, and in fact I know of one other prominent exploitinatorist man by the unfortunate name of Ron Popeil. He is a lot more evil, creepy, and greasy than my less evil, not-as-creepy or greasy self, but he is certainly an enigma.

Ronald Damien Boba Fett Frederickson Popeil III, esquire, was born in rural New Jersey in the year 1904. From an early age he realized that he could best take advantage of people by scooping up dirt from his backyard and selling it to area farmers as "Amazing Downtown Brown Crop-Growing Super-Silt." The farmers quickly bought his dirt by the bucketload and before the age of four little Ron was quite wealthy. He discovered that he could sell anything to people as long as he gave it an interesting and grandiose name. This led to the production and marketing of his patented"Super Sleek Skin Revitalizer and Gourmet Cooking Oil" which consisted of rainwater he would catch in an empty coffee tin outside of his home mixed with his own thick mucus. It sold like tasty hotcakes and Ron was on the fast track to whatever it was that the fast track took you to back then. 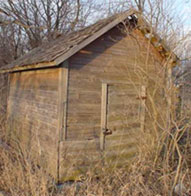 This is the shed in which Ron kept his family all those years. "Put Your Bed in the Shed!"

By the age of ten, Ron was a household name. He sold his products all over the globe to far away places such as Birmingham, Alabama and that one town in that one state that has a funny name. Despite his newfound fame and fortune, Ron was a stingy little tyke and refused to share any of his wealth with his family. He had them exiled to a small, dilapidated shed behind the large mansion that he built for himself and put them on a ration of weeds and gravel. He used his fortune to build his own private bowling alley, hair salon, and stagnant swamp inside his mansion as well as erecting a large statue of himself in the town square that depicted him bowling whilst getting his hair done in a stagnant swamp. His family remained in the shed, although he preferred to call it the "Rustic Rehabilitating Quaintly Curious Familial Lodge."

As the years went by, Ron realized that he had to continue to sell new and seemingly interesting products to people or else his fortune would only grow by hundreds of thousands per year, and that was just unacceptable. He set about trying to devise new invention ideas. It was around this time that he noticed that his family, locked in the shed this entire time, showed no signs of dying and in fact looked to have aged not a day since their imprisonment. He did a little experimenting and quickly realized that it was the diet of weeds and gravel that kept them looking young. He immediately switched their diets to that of mud and goat's milk but adopted their old diet in the hopes that it would cause him to live longer. Indeed it did, and to his day Ron Popeil looks to be a mere 50-odd years old, although chronologically speaking he is almost 100 years old. The only visible sign of his actual age is that his skin looks to be that of a freakish burn victim or perhaps some sort of plastic tarp that has been shoved into a tanning bed for days.

Ron's family finally kicked the bucket in the shed, and Ron himself began to sell his inventions to the general public around the globe. Examples of his new products included: 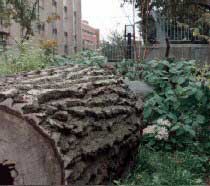 More Flame-o Wood was sold than any product ever in the history of the universe and time.

Pet Waste Paste Maker: "Turn Waste into Paste!" This is a machine that converts your pet's waste products into a multi-purpose, sticky paste that you can use around the house or pretty much anyplace.

Printable Potty Paper Plus: "Just Type It and Wipe It!" This is a certain kind of reusable toilet paper that comes with its own special machine for printing messages on. Perfect for "larger" customers.

Extra Super-Flammable Flame-o Wood: "Burn it Up Like Wood!" This is wood.

Really Hungry Donkey that Can't Stop Eating Because There is Something Wrong With It And It's Always Hungry: "Feed the Donkey your Honkey!" This is a donkey that was genetically engineered to be very hungry all of the time. Ideal for getting rid of unwanted leftovers, white trash neighbors, and possibly outdated lawn furniture.

Today, the Popeil empire stretches to the ends of the Earth, to some neighboring planets, and even to Russia. Ron is a wealthy man and for some reason people don't stop buying his junk. I can't say that I have not been tempted to purchase his patented Very Loud Pasta and Sausage Grinder Machine or his patented Spray-On Hair Spray Hair to spray all over my body so that I could look like a freakish yeti and scare small children. I have to say, however, that my greatest Popeil-related shame consists of actually purchasing one of his products. Unfortunately it was not that little thingy that lets you conveniently chop your own fingers to little pieces in a matter of seconds. It was that other larger thingy which lets you cook large slabs of meat by rotating them on top of your kitchen counter. BUT WAIT! THERE'S MORE! 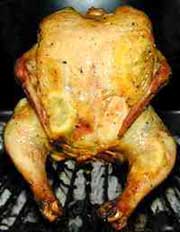 We (Sir Rich "Gobs-o-Butter" Kyanka and myself) recently acquired one of these crazy things after an Ambien riddled evening of looking for things to buy online and deciding that yes, we need one of those right away! It was very important that we purchase this device so that we could cook entire chickens ourselves in a short amount of time, watch them rotate slowly on top of the kitchen counter, and then eat them after we had cooked them. Little did I realize that this would entail having to prepare the raw chicken for cooking which was one of the most disgusting and soul-crushing experiences of my life. This especially included having to remove the severed chicken neck from its body cavity.

After the chicken was impaled on the metal rods of the rotisserie device, we were able to enjoy the loud rumbling the machine made as it turned for two hours as well as the intermittent but loud, high-pitched squeaking noise of one of the metal parts rubbing aganst another part every three seconds. But we did get a tasty chicken out of it and we also used the machine to cook a roast of some sort and some hot dogs, which were also pretty tasty. In that sense, I suppose we got our money's worth out of the thing but it is just sort of amazing to me that this guy sells hundreds of these things per day at $100 per machine (for the small one) and that this is only a small bit of his invention empire.

I honestly dislike Ron Popeil, in case some or most or all of you couldn't tell by my incoherent ramblings thus far. I dislike his smarmy and phoney baloney attitude on his crazy infomercials and for the most part I dislike his slightly useful yet ridiculous and poorly-made products that for some reason members of the general public, especially old people, seem to buy with their gumment moniez. Despite my wantng to rip out his fingernails one by one, I do have to give the guy credit for making money appear out of nowhere and I wish that I had the smarts or the wherewithal to sell water to fish. See, if I sold water to fish, I'd really be good at selling things because fish don't need any more water. They're already in water, you see. And then I'd make a lot of money off of those dumb fish.