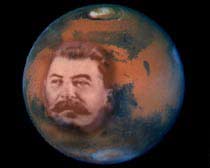 The new face of terror!

It appears as if just as one terror ends, another starts up and takes its place like that stupid Olympic sport where some guy runs around in a circle and hands a stick off to another guy, who then proceeds to run around the same circle and hand a stick to yet another guy. To sum up the current list of terroriffic events that have plagued our country like that time when Jesus turned a crop of Egyptians' corn (which they called "maize") into burlap bags full of sand and locusts, I will proceed to make a bulleted list of items in the vain attempt that somebody will actually read this site past the initial sequence of vowels:

Even as more events of sheer terror continue to pop up like ads on a Tripod AzN PrYdE site, America has somehow found itself once again cowering under the behemoth shadow of an ultimate evil, an unspeakable force of catastrophe and vile wretchedness even more disgusting than videos of backyard wrestling. This unholy force recently held a press conference and revealed its sinister plans to do the unthinkable: conquer Mars.

Russia proposes joint effort to conquer Mars - Refusing to be deterred by a string of failures in exploring Mars, Russian space officials have proposed an ambitious international project to send a human crew to the red planet around 2015. Anatoly Grigoryev, director of the Institute of Medical-Biological Problems, which works with all of Russia's cosmonauts, said Russia's plan calls for a cargo and a manned ship, which would consist of a commander, a second pilot, a flight engineer, a doctor and two researchers. Three members of the team would descend to Mars, while the other three would remain onboard the ship in orbit.

Grigoryev said the trip could answer many of the remaining questions about Earth's mysterious neighbor. "Is there life on Mars? If there is, what kind of life?" Grigoryev said, barely able to suppress his excitement. "This would be historic."

Russia's last attempt to build a spacecraft. The AM radio soon caught fire and the project was called off.

Simply put, we cannot allow this to happen. Although the Iron Curtain has collapsed, the Berlin Wall has been destroyed by Orcs, and the hammer / sickle Soviet flag has been replaced by a large sign reading "WILL WORK FOR FOOD," we are still threatened by a dormant Communist menace that will stop at nothing to undermine our glorious Democratic lifestyle of electing old white people to public office. Somewhere in the back of a seemingly abandoned factory in Moscow lay hundreds of sealed Communist Robot crates, ready to rush out and begin convincing innocent people to grow comical facial hair like Josef Stalin did, at least before he was killed. What I'm trying to say here is that we may think we're safe from the Red Tide sweeping in, but much like the "Jason" or "Halloween" franchise of films prove, evil can never die, even if you try to kill it by giving a production budget smaller than an average combo meal at McDonalds. Evil can hide anywhere at any time; it could be sitting in your air vent right now as you read this, plotting its next move. Its next EVIL move.

Now it's no secret that all Russians are godless drones bent on destroying everything we freedom-embracing humans hold dear, such as pencil sharpeners and Ron Popeil products. They may try to fake us out by pretending they're all reformed now and don't want to launch missiles at us any longer, but astute people like me know the truth! This recent news release detailing Russia's plans to overtake Mars and turn the Red Planet into the, well, Red Red Planet, simply confirm what I've been saying for at least the past thirty minutes, whatever the hell that was. We cannot allow Russia to deploy a space shuttle full of backstabbing Commie pinko Ruskies so they may colonize Mars and threaten to crash it into America if we don't meet their outrageous demands! Have we not learned anything from Cobra Commander?!?

On the positive side, I suppose Russia's less-than-stellar space track record may alleviate some of our fears. Here's a rundown of the last five Russian space exploration attempts, all of which add up to a space program that seems barely capable of determining exactly which direction space is.

March 1995 - Russia builds a probe designed to orbit the moon and collect dust samples from a passing comet. The probe catches fire while being launched. Upon further investigation, Russian scientists discover that the probe they ordered was actually a 1993 Ford Probe with a faulty engine.
January 1997 - The space shuttle "MOSKOW TYPE R" is launched from the top of a tire store. It immediately crashes into the Baltic Sea, wherever the fuck that is.
February 1997 - Russian scientists attempt to relaunch the "MOSKOW TYPE R," but are unsuccessful since none of the scientists can hold their breath long enough to swim to the bottom of the Baltic Sea.
September 1998 - Money from the space program is cut off and instead funneled into the construction of a huge tunnel that will connect northern Russia to an area that is really far underneath northern Russia. Miners flee the scene when they discover a dead canary at the bottom of the tunnel.
February 2000 - Russian scientists give up on launching crap into space and instead focus on making the Earth rotate in such a degree that their country will be on the bottom of the planet, at which time they can simply jump up really high and enter space manually. The program is marked "dead on arrival" after the two scientists responsible for brainstorming this idea are found "dead on arrival." 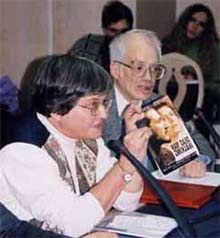 I found this image during a Google Image search for "Russia." Now tell me, do you honestly want these people to take over Mars? I mean, look at that guy in the back! His mouth is all fucked up! Ha ha!

While we may feel the urge to laugh and mock the Russian space system for being so comically inept, we must remember that when people are mocked in various films, they usually become very angry and end up stabbing their tormentors in the face. I think we're relatively safe from being stabbed by Russian space scientists, but this wily plan of theirs to take over Mars is the equivalent of stabbing Democracy in its collective face! We cannot, under any circumstances, allow the Russians to reach Mars and begin doing their dastardly Russian things, such as being cold and miserable and wearing those goofy fuzzy hats. The consequences of a Russian-run Mars are simply too heinous and horrifying to name, which is why I will attempt to do so in the following paragraph.

CONSEQUENCES OF ALLOWING THE GODLESS COMMIE RUSKIE ROBOTS TO GET TO MARS AND DO WHATEVER THE FUCK THEY PLAN ON DOING:

1) They will turn the mysterious face on Mars into a mysterious face on Mars that launches fireballs at all planets who oppose their Communist manifesto which, among other things, abolishes casual-wear clothing on Fridays.
2) Once Mars falls, it's only a matter of time before they capture Venus, Jupiter, Ares, Hera, and the Planet of the Apes. Then, before you know it, they've got ICBMs stationed on the sun and are ready to launch them at the drop of a hat. No, literally, their missiles launch at the drop of a hat. It's a bug in the hardware.
3) Mars might have a lot of gold or Martian jewels on it, and if the Russians get a hold of that then they might undermine the budding cubic zirconium industry of America.
4) By colonizing Mars, there is a potential threat that the events from John Carpenter's "The Ghosts of Mars" might occur. If this happens, so help me God, I'll get enough Drano enemas to flush my eyeballs completely out of their fucking sockets before having to watch that crappy wad of parrot semen again.
5) The Russians will shoot their Martian Laser Cannons at me and force me to repeatedly write five-item lists on each update.

I think it's clear that our patriotic duty as American citizens (even if you're not an American you're still supposed to do what we say) is to prevent the Russians from launching themselves into space at all costs. Of course their engineering team seems to be doing this job for us, but I don't think it's too unwarranted that we ask the US Government to step in and do what they do best. I'm not exactly sure what that is, but it probably involves taxing them or making flying illegal. I guess we could also send in a crack team of US Military Specialists to hunt down and kill the scientists, but I doubt the assassination team could successfully find their way out of their airplane's coach section. Besides, I think they're still hunting Osama Bin Laden and Martha Bin Stewart.

There's Gold In Them There Hills!

The Comedy Goldmine section has once again been updated with only the highest-quality, 100% Something Awful approved content, ready and waiting for you patronage! Today's theme is entitled "Invasion of the Japanese Movie Posters," and tackles the eternal question, "what would popular American movie posters look like if they were translated into Japanese and then back to English?" I know I've been wondering about that nonstop for the last three weeks or so! 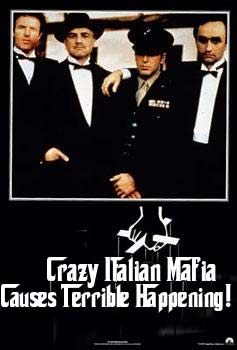 I could type virtually anything here and it would be acceptable if I just link to the aforementioned feature! Hairy fetus goat testicle grabass apple cow!