No, We Are Not Selling Doom 3 Today 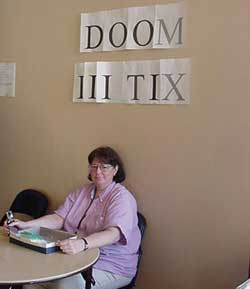 This woman has not had sex in 17 years. If you want to get Doom 3 you need to keep this in mind.I live for big name game releases. I love it when a new Final Fantasy, Half Life, or Barbie Horse Adventure is just about to hit store shelves and warez sites everywhere. Not because I want to play the game or anything, but because of what the poor souls who simply cannot sit still for five minutes post on our internet's many message boards. Huge game releases simply bring out the best in people, whether it's calling every single store that has ever existed to ask them, "Do you have (big name game that will be 20 bucks in a few months) yet?!?!" or holding an American hostage and threatening to decapitate him unless you get your hands on (big name game you'll spend 5 hours with and then never play again). Oh how I love huge releases. It's like a giant trainwreck of misinformation, frustration, and hillarity. No one ever knows when the game is coming out, least of all the stores that will actually be selling it. You could call 20 stores on release day asking when the game is supposed to be in and you'll get answers ranging from, "It's already here!", "Next year!", and "Heil Hitler!" Furthuring the confusion shortbus are people who take pride in posting false threads about how they got the game at the Best Buy in Teluca Lake and the throngs of people that reply, "WHERE IS THAT OH GOD I GOTTA GET OVER THERE I WILL SELL MY FIRST BORN FOR A PLANE TICKET PLEASE OH GOD THIS IS THE ONLY THING THAT MATTERS TO ME BECAUSE I DONT HAVE A JOB OR A FAMILY BECAUSE THEY LEFT ME AND I GOT FIRED AND FUCK I WANT THIS VIDEO GAME."

Of course, the reason I'm bringing all this up is because Doom 3, widely anticipated for it's pitch black hallways and plastic monsters, is almost out! For those that don't know, players will take the role of a space marine on a planet with angry monsters, snooty scientists, and exciting darkness. Your mission objective is to prove that you have the fastest video card possible and defeat Hell's evil minions who won't shell out five-hundred bucks for a ten percent performance boost that yields roughly five more frames per second and a little spout on their computer that serves up fresh maple syrup. Many people were worried that the game would run terribly on older hardware, but thanks to id's patented "Can't See Shit!" technology, Doom 3 will run great even on a STD Velocity 128! id accomplished this fantastic feat by covering the world in darkness. What this does is take substantial load off the video card by not rendering useless things such as walls, monsters, and ammo pickups. But that's not all! Check out this exciting list of features never seen before in a first person shooter:

Monsters covered in saran wrap.
An unprecedented "start to crate" time of 3 seconds. Livestock has informed me that I stole this joke from Old Man Murray but I really meant to steal it from someone in FYAD. Sorry for the mix-up folks.
White people.
Guns that shoot bullets of somekind.
Guns that can be modded to shoot chickens or French people.
Four-player online deathmatch.
Rocket launcher.
Mouse sensitivity options.
Blimp attacks.
And due to popular demand, no cooporative play.

After reading that list it becomes perfectly clear why folks whose lives revolve around getting a game early and posting pictures about it on the internet are wasting their weekend trying to find someone to sell them the game. Assisting them in this backbreaking endeavor is the internet. Would-be owners of a PC game scour message boards for any and all information on who has the game and who doesn't. Too bad none of it is correct and they usually come back from stores angry and frustrated with the same sob story that goes, "I ASKED IF THEY HAD DOOM 3 AND THE GUY SAID THURSDAY. WHAT A FUCKING DOUCHEBAG! I'M GONNA SUE!!!" I usually pray they don't come back at all.

My favorite web site for all of this nonsense is GameFAQs of course. You probably know by now what a pathetic wasteland the GameFAQs message boards are. Let me tell you folks, they are even worse around the time a big game is supposed to hit. I remember when Vice City was about to come out. The boards were buzzing like a bee on my cock. There were threads like, "when u get the game what will u do first?!?", "WHO IS BETTER TOMMY VERCETI OR THE OTHER GUY", and "HOW DO I GET MY MOM TO BUY THIS GAME FOR ME!?!?!" The Doom 3 boards are no different. Don't take my word for it, just visit the Doom 3 message board for undeniable proof that teenagers shouldn't be on the internet. Here's just one out of thirty-nine pages of brain melting shit.

Every single post in that forum revolves around some slight variation of the following three images.

The real question you should be asking is, "Does my brain work?"

I got the game by sucking off the Best Buy truck driver.

Nobody has the game. Nobody can get the game. Bothering retail employees about Doom 3 all day will leave you hot, tired, and frustrated. There is no fucking way you will be getting the game this weekend. It's not going to happen! Unless you live in Wisconsin that is.

Yes, Best Buy store 59 in Madison, Wisconsin started selling the game yesterday. My question is, why Wisconsin? Who still believes Wisconsin exists? The only reason to go to Wisconsin is to make fun of people who live in Wisconsin. Their cheese is shit and their cows are sterile. There is nothing worth more than 50 cents in Wisconsin. I can't even find Wisconsin on a map. As it stands there are only three reasons to live in Wisconsin: snow, hideous women, and apparently getting Doom 3 early.

I'd be jealous but shit, they live in fucking Wisconsin. If I were ever on a cross country trip across the northern United States and I had to pass through Wisconsin I would go all the way around the state so I wouldn't have to drive through that God forsaken place. But I have to be honest. You know what I would do if I got Doom 3 early? Sell it on ebay for a million dollars of course! And even if the auction didn't get shit on by a bunch of people bidding a million dollars, why would you seriously bid on this? Let's use logic here shall we? The auction ends today. I doubt DHL ships on Sunday. And even if it did, the winner would get his game on Monday, about the same time Gamestop and Electronics Boutique is going to start selling their copies of Doom 3. Congratulations, you've just gotten the game a whole four hours early for roughly 100 bucks and can pat yourself on the back because you are undoubtably a brilliant man.

Look, I want to play Doom 3 as much as the next moron who wastes his life playing stupid video games but let's show a little shred of dignity about it. Spend the weekend playing games you already have then go get Doom 3 when it actually comes out. You don't need to spend all weekend wasting your time trying to bribe Best Buy managers to sell you a game. They have better things to do with their time, like studying for their GED test.

Hello internet friends, Zachary "Spokker Jones" Gutierrez here. Like a dog in heat I have shit out another fine Weekend Web for you folks to puzzle over. You'll ask yourself such soul searching questions as, "Why does this feature still exist?" and "Which way is the restroom?" Today we're featuring people who get hardons for animated characters, people who jump up and down on a plastic dancing mat, and people who want Adult Swim to show more anime and less comedy.

Okay, there's the preview and here's the link. Now get the fuck off my lawn!