With the release of Vampire Weekend's Contra, there's finally a 2010 album readers want to see destroyed. Not me, though. I think it's weird to see people get so worked up about this benign little group, with its polysyllabic lyrics and loping polyrhythms. Why not enjoy a cultural safari with these friendly-looking lads? Hakuna matata.

It's still officially the season of the light's bane in Missouri, with weeks-unmelted snow smothering everything: The perfect landscape for reveling in bleak music composed in some faraway forest. And despite opening with a song about drinking a chilled beverage when "winter's cold is too much to handle," Contra sounds too goddamn warm, like it's going to spark a beer-commercial heatwave or summon a giddy stampede of animated animals. It's too early in the year for that shit. Still, I wanted to mark the release of Contra somehow without actually having to listen to it, so I passed the assignment to fellow music expert Daryl "Fucking" Hall. He didn't listen to it, either, but he did explain the bizarre furor regarding Vampire Weekend, which, at this point, is more compelling than its music could ever be. 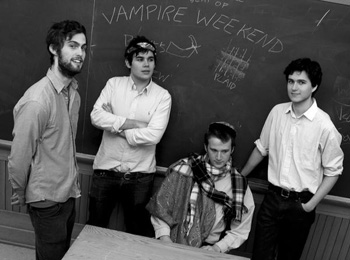 How could anyone get angry at these guys?

As long as there has been art, there have been people to take a cursory look at that art and declare it uninspired crap. In ancient Greece, there was probably some asshole calling out Homer, muttering to his friends, "He's blind, how does he even know what a shield looks like?" In modern times, these kinds of people were mostly confined to Freshman English seminars and Pantera concerts. Then, the Internet rolled around, and everybody collectively lost any sense of shame or decorum. Nowadays, you don't have to look very far to find a bunch of goons decrying the death of modern music, what with the Lady GaGas and the Animal Collectives and the fucking Vampire Weekends.

What makes these nerds so vindictive is that the source of these bands' popularity is the Internet itself, once a sanctuary for the musically unhip to discuss Todd Rundgren CD-ROMs and whatever the hell Queensryche is up to. Now music blogs engage in serious hyperbole and worship in order to attract traffic and attain "tastemaker" status. The result is an incredible backlash, characterized by feckless exaggerations. These highly touted bands aren't just mediocre or unworthy, they're "actively raping your eardrums" or "shitting on their guitars instead of making music."

Vampire Weekend isn't particularly offensive. (Or, at least, they're not offensive musically. Dubbing your aesthetic "Upper West Side Soweto" is pretty terrible.) But for Vampire Weekend's most vocal critics, the real evil isn't the band itself, but rather the monstrous Hipster Hype Machine. Suddenly, a band whose debut album sold more than 500,000 copies becomes elitist hipster trash, enjoyed only by mythical skinny assholes in tight jeans taking swigs from cans of PBR between lines of cocaine. If you like it, you only like it because you think it makes you look cool.

Upper West Side/ Soweto. See! They were being ironic!

There are two kinds of people who react to over-hyped bands with this kind of vigor. The first is proudly ignorant - he'll jump into discussions of new music just to brag about his unfamiliarity with contemporary acts, declaring that music reached its peak before John Bonham died and that hip-hop is just black guys talking fast over other peoples' music. Like "cool" kids ("cool" in the high school sense of the word -- bros, quarterbacks, etc.), this angry nerd looks upon hipsters with hazily rationalized scorn, but instead of just calling them "faggots," he calls them "pretentious faggots."

The second sort is almost his exact opposite. He's very informed - possibly too informed. He reads music blogs incessantly, and then whines when any three of them mention the same band in a positive light. Suddenly, they're over-hyped and he's tired of hearing about them. Never mind that he could fix this by cutting out one completely redundant blog, he doesn't want to miss out on bitching about the next big thing. For a lot of people, this fits the definition of "hipster," but real hipsters actually go out and see live music, instead of just reading about it all the time.

Despite their differences, these groups have one thing in common - they're both nerdy as hell and both very upset about "hipsters" listening to music they don't like. Basically, you've got a bunch of insecure nerds who want to kick slightly less insecure nerds off their lawn. They conduct battle using adverb-adjective combinations, with bloggers firing "devastatingly transcendent" missiles in defense of bands while getting "cocksuckingly miserable" bombs dropped on them. If you're not quite sure which side you're on, I've written a small quiz that can help you figure it out.

The lyric "I just want/Four walls and adobe slats/For my girls":

That guy from the "I'm a Mac" commercials is:

Congratulations! If you answered mostly A, you're an asshole. Same if you answered mostly B. If you thought to yourself "well, neither is really true," you see the problem with discussing music on the Internet. There's a vacuum in the middle, where you would normally find "reasonable, well-explained criticism." This probably exists somewhere on the Web, but the people behind it are either ignored or flamed into oblivion for not choosing one side or the other. 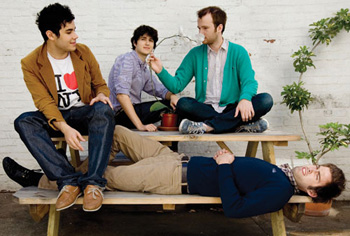 Lay down your arms. Stop and smell the flowers.

So there it is. If you've ever wondered why you see tons of chatter on the Internet about a few bands, but never hear people talk about them in real life, you've got your answer. What you're witnessing is essentially a secret war between bloggers eager to make a name for themselves and message board posters vehemently opposed to being exposed on their own turf as the out-of-touch shut-ins they are. Except it's not a cool secret war, because instead of being covered up by conspiracies and espionage, it's secret in the way Webcomics are secret - no one gives a shit.

If you're not sure whether Vampire Weekend's Contra is going to be the greatest record of all time or if it will make you want to end your own life, I'd recommend actually picking up the album and giving it a listen before choosing sides, but be warned - you'll be called some combination of a curse word and an animal for doing so. Squirrel dick.