A Nugget of Truth 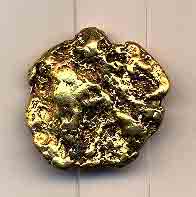 It's a nugget alright, but you can't eat it. Unless you're a robot, in which case this is like candy to you.

Like the stains on my bedsheets, the American people are remarkably diverse. We claim that our diversity is our strength, but other countries (Uruguay, I'm looking in your direction) know better. For the US of A to really dominate the globe with the frightful might of the undead, we need to excel in every field. Sure, we may have the largest army, the best movies, and the finest institutions, but there is one area in particular in which America is still getting schooled. Other countries can unite behind their national cuisine - whether it be the French frog and snail and other disgusting creature sampler, the German children sausage, or the Chinese kung pow poodle - but America has no food to call its own. The hotdog? Just another name for a frankfurter, as in Frankfurt, Germany, so that's right back to the children-eating again. Apple pie? Nothing but a bastardization of the traditional Pievania dish. No, we Americans cannot unite behind these delicacies that we so shamelessly stole from lesser or imaginary nations - not when we have a perfectly good, uniquely American food right here, just waiting for the respect it deserves. I'm talking, of course, about the nugget. Whether chicken, fish, or some sort of chicken-fish hybrid that I call "fishen," the nugget sorely deserves to be recognized and hailed as America's food. 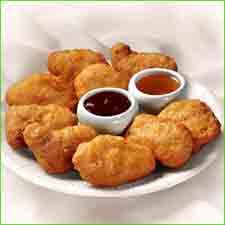 Somehow, they never look quite like that at McDonalds. It must be the tablecloth.

The nugget has played an important role in America's history. In 1849, thousands of crazy idiots - American crazy idiots - rushed to the West Coast armed only with a pickaxe and a bindle full of dreams. And for what were they rushing? For gold. For nuggets of great, golden gold. This movement was appropriately called "The Great Movement Westward to Get Gold Nuggets In a Rushing Fashion." If not for the desire of these gold nuggets, California would be filled with nothing but Native Americans and caribou - in other words, a wasteland. American history is littered with nuggets. George Washington may or may not have actually eaten some sort of nuggets while crossing the Delaware. Also, my roommate's girlfriend told me that she used to use "nugget" as a euphemism for "penis" when she was younger. Clearly, the nugget has always been a guiding force in the shaping of this nation of ours. Today, the nugget has many forms. In cafeterias across this beautiful land, from the purple mountain majesties to the fruited plains to the not-quite-so-fruited plains, children eagerly await chicken nugget day. At any given moment, untold numbers of people are ordering Chicken McNuggets from their local McDonalds. At the same time, scores of people are ordering Chicken McNuggets from their local Burger King, disgruntling yet another BK employee. Gruntles aside, the nugget is an amazingly positive, yet largely ignored influence upon our national culture. That is why I propose we make the nugget America's national cuisine. Since I am a white suburban male aged 18-34, everyone listens to me, so I consider my proposal to be as good as law. We must now enter a period of adjustment as we all become accustomed to eating nuggets six times a week (or face six years in prison). It shouldn't be too difficult. Nuggets offer something for everyone.

Your standard nugget is made of pressed chicken, lightly breaded and cooked in its own drippings. This is commonly known as the "McNugget." You may hear it called a "Chicken Tender" or a "Wendy's Chicken Tender," but it's a freaking McNugget, and that's the end of the story. There are, however, variations on the classic. As I mentioned earlier, you may encounter a fish nugget, but I think we may actually have to exclude that particular item from the list of acceptable nuggets. Any good meal should involve some sort of meat, and fish are basically just the plants of the sea. Now, something like the Meat Lover's Pizza is a real meal, in that for one Meat Lover's Pizza to exist, two animals have to die. Now that would make a good nugget. For the most part, though, nuggets should emphasize our national pride and heritage. I have mustered all the culinary skill that I possess to create a select few delicious examples. 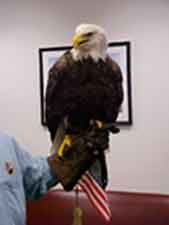 When I first came to the realization that the nugget was the perfect American food, I realized that there needed to be a nugget that symbolized everything good and just about the US. That's when I remembered that Benjamin Franklin, one of the most beloved figures in American history, originally suggested that our national bird be the turkey. It's a damn good thing that got voted down, because now I can bring you a nugget made of 100% bald eagle. Note that I said "A nugget." We're going to run out of bald eagle meat really quickly. After that, we'll have to start using fillers. Other eagles, probably.

You can't very well make America nuggets without giving some representation to the Native Americans. For too long, the hardships they have suffered at the hands of European Americans have been glossed over, and their pride and numbers have dwindled. We cannot, as the leaders of the free world, just ignore that part of our collective history. With that in mind, I've whipped up a delectable batch of buffalo nuggets. What better way to remember the senseless slaughter of almost the entire species than to eat the rest of them one little bite-sized bit at a time? Like the bald eagle, though, the supply of buffalo is rather limited. Once we're out, we'll have to start using Native Americans themselves. They seem to do what they're told, so I don't think it will be a problem.

We're back, because I was low on ideas this week.

As the fastest-growing Greasnin-started organization in the world, ELEAWTA (Eating Lethal and Endangered Animals While They're Alive) fully deserves its own nugget. No other group so fully embodies the American spirit of bravery and rugged individualism. I think we can all agree that the best Americans are the ones who wouldn't flinch about ripping a grizzly bear apart in one-on-one combat, then eating the remains. Plus, since this article is basically just a rehash of the ELEAWTA update, I sort of had to mention the group. What's greatest about this nugget is that it's different every time. Any given nugget could be made from hundreds of different endangered animals, whatever the courageous members of ELEAWTA managed to kill that day. If they could actually manage to come up with a way to compress chunks of an animal into nuggets while that animal is still alive and fighting, it would be a symbol of democracy that we could all rally behind.

Now, I can't fathom eating one of these myself, but ever since that damnable sensitivity training, I've become more open to the needs of others. I acknowledge and respect the fact that there is a disturbingly sizeable fraction of Americans who would rather not eat meat. They may be smelly and less attractive physically than normal Americans, but damnit, they're our brothers and sisters, and in the spirit of the nugget movement, they must be embraced. Although it pained me to do so, I devised a nugget that caters to the vegetarians' diet. Innocent vegetables are ripped from the life-giving ground, their roots torn asunder and left as food for rodents and swarms of insects. The vegetables are then skinned with a razor-sharp steel blade, and the strippings are hurled mercilessly into a pot of viciously boiling water, so that their essence may be sucked forth as flavor for the horrid brew. The vegetables themselves are then chopped up like so much shredded newspaper, small pieces sticking to the unfeeling edge of the cold knife, before they too are thrown into the pot. There, they are left to stew in their own juices, the searing heat releasing their true flavor. Once boiled, the vegetables are dumped into a blender and mangled by the whirling blades. The resulting pulp is then mashed, breaded, and baked. You vegetarians out there will undoubtedly enjoy such a tasty delight, if you can live with the death on your hands. Guilt trip your way out of that one, hippies!

I'm no chef, but I am a proud American, and I would be honored to eat any of these nuggets (except for that last one, that's just cruel). I know that when I do, I will be eating a part of America, and that my gastrointestinal juices will dissolve it and release the nutrients of this mighty nation into my body, so that I might be strengthened by its unity and riboflavin. Stand tall, Lady Liberty, and let your torch be an oven of truth and hope, always baking America's nuggets of freedom to a golden brown tomorrow. And stand tall Americans, knowing that we finally have a way to show up France in basically the only thing they're good at.