Vice City is the Worst Game Ever

Vice City is the Worst Game Ever 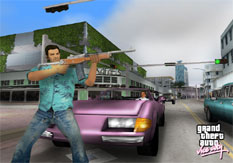 Rockstar games is responsible for making the only game with fewer redeeming qualities than Chiller for the NES.What is wrong with America today where we are letting our children purchase and play games like "Grand Theft Auto: Vice City"? This is a question that needs to be asked and needs to be answered and corrected. This game is sick, it includes not a single redeeming moral point, and I guarantee you that it will be directly responsible for nearly as many deaths as one Mister Adolph Hitler. Even worse, it's not just the Jews and the Gypsies that this game is killing; it is stealing the lives of our precious white babies! The time has come for someone to stand up and make a stand on this issue and I am just the man to stand up and do that!

Parents, I hope you have your reading glasses firmly attached to your head with some sort of tape, because when I tell you about the horrible things in this game they are going to explode from your face possibly injuring a loved one or pet. For those readers who have monocles I suggest epoxy or possibly hot glue to ensure that monocle flying injuries do not force anyone you care about into the hospital. In the event that your favorite dog is made into a mute by a projectile monocular I sincerely apologize, but don't attempt to make spurious claims that I did not warn you.

For those of you who are game developers, and I know there are a few of you out there, I suggest you read closely. Your stupid excuse for putting out these scandalous games always seems to be that it's "what people want", but that's no excuse. To make sure it's no excuse I will be providing developers with family-friendly alternatives to features in Vice City. Please take note of them and possibly incorporate them into upcoming titles so as to encourage rather than hinder individual spiritual growth. 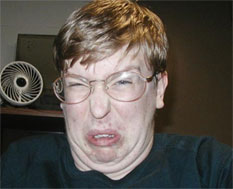 Won't someone please think of the children!?

Horrible Fact One
In Vice City it is possible to drive at top speed at a police officer and bail out of the car just before it hits and kills him without suffering any penalty worse than a few bumps and scrapes and without incurring the wrath of law enforcement.
Effect on Our Precious Children: Since our beloved daughters and sons learned to illegally carjack from the first Grand Theft Auto game they should have no problem whatsoever getting a car. I expect the incidence of "vehicles coasting into policemen" to increase dramatically in the coming months and unlike in the game you may actually be arrested for doing this.
Alternative Suggestions: Instead of driving cars into policemen why not replace the cars with something whimsical like a magic carpet, and if you collide with a policeman maybe they could give you a brief speech about staying off drugs or not littering. Perhaps they could explain all of the harmful effects of marijuana such as slight coughing, headaches, mild nausea, and increased tendency to eat unsanitary leftover pizza that has been sitting on your table for two days.

Horrible Fact Two
It is not only possible to commit fraud on a massive scale using nothing but a remote controlled helicopter and four bundles of demolition charges, it's actually encouraged in Vice City.
Effect on Our Precious Children: Picture this scene parents: your son or daughter is sitting in the cafeteria eating a tray of nutritious food and talking politely with his or her friends. Suddenly there is a buzzing and through the open door flies a helicopter. A few teachers swat at the machine, which obviously has lethal explosives slung beneath it, but as they come near it the helicopter tilts and slices them to death with its spinning rotors. As your children begin to flee the little machine flies over to a glowing red barrel and drops the dynamite. The school explodes and hundreds of innocents are killed! Somewhere a block away, in an inconspicuous silver van, a video game twisted teen laughs with triumph.
Alternative Suggestions: Remote controlled helicopters are sinister enough without using them in a plot to blow up buildings. I much prefer the low-key aerobatics of Nintendo classic "Gumshoe" in which you must use a pistol for nothing more than assisting a detective in jumping and collecting balloons. Gumshoe, now that is a game the whole family can agree on! 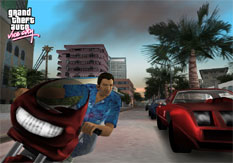 There are the exact same number of motorcyclists in helmets as there are positive role models in this game.

Horrible Fact Three
In Vice City helmet laws for motorcyclists are completely out the window. Not only do those on motorcycles not wear helmets, but they are able to walk away from head-on crashes with a sports car at over 200 mph that send them flying through the air and into a lamp post.
Effect on Our Precious Children: Kids already have enough trouble understanding the physical consequences of accidents and improper safety. They oftentimes think themselves immortal or at the very list don't even consider the possibility of death or debilitating injury. This game only feeds into that, making it much worse.
Alternative Suggestions: Perhaps the makers of Vice City could have offset the damage they are doing to motorcycle safety awareness by including a mini-game called "don't sprain your ankle". You would have a healthy objective like a plate of vegetables and non-fat dip on one end of an open field and you would have to run across avoiding shallow holes. If you step into a hole you will have a high-likelihood of spraining your ankle, at which point maybe an eagle or something could swoop in and steal all of the delicious celery stalks because you were too slowed by injury.

Horrible Fact Four
Prostitutes in Vice City both heal you and sexually pleasure you without moving any part of their body. This implies that prostitutes possess an innate form of telekinesis that allows for them to simultaneously mend wounds and bring a man to climax with the powers of their mind alone.
Effect on Our Precious Children: While making kids think that ladies of the night possess otherworldly psychic abilities might give them a healthy fear of the world's oldest profession, the fact that they restore your health may cause precocious tykes to seek them out for medical advice and assistance. Since most prostitutes have little understanding of modern medicine aside from knowing what topical creams relieve inflammation of the uterus and possibly the best angle to bend a coat-hanger at it is doubtful they can provide any useful aid to our young ones.
Alternative Suggestions: Instead of picking up prostitutes perhaps the player could pick up elderly men and women who are lost and wandering in the city. When they drive them to a secluded alleyway or the beach the old person could tell a long and endlessly recursive story about shopping for socks in 1951. If the player sits through the story the old man or woman could reward them with a dollar and a piece of ribbon candy with healing powers. 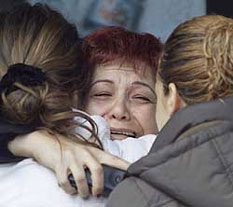 I hope you enjoy seeing this, because you're going to be seeing a lot more of it in the next year or two.

Horrible Fact Five
Players are rewarded with money for performing outrageous stunts in the game. For example driving up a flight of steps, flipping your car end over end, and landing it on top of a building will provide you with over a hundred dollars. This implies that either some government agency or an omnipotent being will reward people in the real world with funds for performing impromptu stunts.
Effect on Our Precious Children: Who needs MTVs Jackass when you have Rockstar and Vice City implying that behaving like a dunderhead will bring you a financial windfall?! I expect to see kids driving stolen cars over buses, attempting to leap rivers and chasms, and wheeling on motorbikes off the hood of sports cars in the immediate future. I also expect a lot of tragedy to come from all of this.
Alternative Suggestions: Safety should always be the priority on the crazy roads of today and games should reward players accordingly. A bonus could be provided for players who remember to buckle their safety belt and look both way for turning. Perhaps parking bonuses and stop-sign politeness bonuses could also be provided. A mini-game which features the player halting abruptly to allow ducklings to cross a road would sure be a big hit in my household, and that's the only one that counts!

I hope very much that my suggestions get through to these cold blooded game developers in their silicon towers. I fear for Vice City it is too late and the only thing we can hope is that Congress and maybe even the President will see just how terrible this game is and impose an immediate ban on it. As for the rest of the game industry, we need to force them to conform to guidelines that parents set forth and the only way to get this to happen is by filing frivolous lawsuits and crying loudly on national television.

More Ugly Coming At You!

Cliff Yablonski and the Appleton City Failed Abortions Hospital are proud to bring you an all new installment of Cliff Yablonski Hates You. While we cannot guarantee with 100 percent certainty that Mr. Yablonski will, in fact, hate you, all indications are that he thinks you are a greasy faggot and that he hopes you perish in the most painful manner available to science. 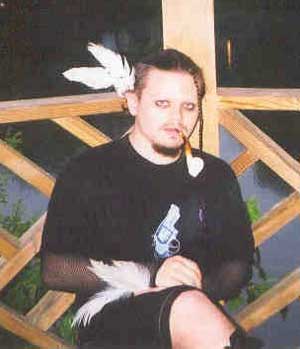 Chief Indian Blackheart Whitetears. He tried to start up his own goth Indian riverboat casino, but the government had to shut it down because all the white pancake makeup worn on the boat was causing it to sink into Lake Meatshores.

Head on over and take a look at Cliff's latest work. He promises that if you're disappointed you can return the unused portion and he will drive to your house and pound three boots down your throat with a claw hammer.