Scientology Inside and Out!

Science is Here to Help, Not Hurt! 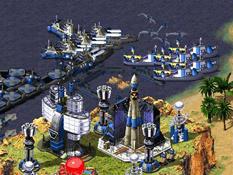 When I first heard about the Scientology lawsuit threat against myself and Something Awful, my initial reaction was shock and horror. Well, actually I started laughing really hard at first. Then I laughed some more. Then I reread the email again and continued to laugh. Now that I think about it, I don't really remember where the "shock and horror" part came in. Oh wait, there was a moment after that when I went to get something to eat and feared I had put a beer in the freezer previous night. I felt shock and horror when I thought the beer might have exploded from being frozen for so long. However, it turns out everything was okay, so that crisis was narrowly averted. Rich "Lowtax" Kyanka: 1. Scientology and frozen exploding beer: 0.

Since Something Awful occasionally pokes fun at the flaming cash cow that is Scientology, it came as no surprise to me that they were teaming up with exploding beer and legal attack dogs to threaten this site. After all, Scientology is to lawsuits as humans are to breathing, although I'd really hate to draw a comparison between Scientologists and human beings. The Scientologist exploding beer legal attack team assaulted my webhost with the following letter, warning of their impending demise:

Our office represents L. Ron Hubbard Library, the owner of the copyrights to certain photographs of Mr. L. Ron Hubbard. Please be advised that one of CAIS's customers, has placed one of these photographs on his or her home page on your web site without the authorization of our client. This copyrighted work can be found under the following URL:

The letter went on for roughly 10 pages, detailing every court case they won since the mid 1600's and basically inferred that if I didn't remove the picture, a gang of wolverines would somehow find their way into my apartment, tear me to pieces, and use my vital internal organs to fertilize their hydroponic tomato farms (the Scientologists' hydroponic tomato farm, not the wolverines'). While I am a big fan of tomatoes, I do not have the same zeal for $100,000 lawsuits against myself and my site. I immediately changed the photo to a "new and improved" drawing of L. Ron Hubbard, depicting him as a floating head with machine-gun eyes and a large forehead in the shape of a giant penis. The penis forehead symbolizes strength, power, courage, and the fact that Scientologists are dickheads. Although the threatening lawsuit was narrowly averted, this strong-arm Scientologist technique alerted me to the fact that Scientology is, in fact, the "correct" religion and all my petty barbs concerning their noble work were pointless and mean-spirited. I have decided to change my hurtful ways and instead embrace the warm, caring iron grip that is Scientology. Let me present to you my first contribution to the religion which has given so many people so many things to live for. Here is my brief overview of Scientology, an article meant to help spread the word of this beautiful and wonderful organization.

A Brief Overview of Scientology 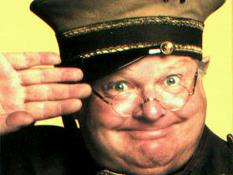 Scientology was created in the 1950's by famed author L. Ron Hubbard, a popular science fiction and self-help writer who created the following critically-acclaimed books:

The Way to Happiness

Happiness is This Way, Over There, to the Left of the Couch

Happiness is Over Here Too, Next to the Hat Box

Aliens Vs. Mummies Vs. Tanks

This impressive book list proves that Scientology is set apart from all those other silly religions that were created by filthy hippies who lived in dirt and hung around with lepers. L. Ron Hubbard transcended dirt and lepers; eventually became too bloated and elderly for dirt to hang off him, and those fruity scarves that he always wore around his neck were constantly clean and kept the lepers at bay. Many non-Scientologist are jealous because L. Ron Hubbard was the first major religious person to truly "connect" with the general public. Look at the Pope; he's always protected by security guards, kept in secret, and never interacts with the people who admire him. L. Ron Hubbard showed up at science fiction conventions and signed autographs. Do you folks understand what that means? He went to SCIENCE FICTION CONVENTIONS, for crying out loud. That makes him a goddamn martyr as far as I'm concerned.

Due to his constant interaction with the human waste ponds that inhabit science fiction conventions, L. Ron began using a lot of anti-Thetan medications such as Martian Meprobamate and Venusian Valium. Eventually he noticed that despite the amount of drugs he took, the aliens kept coming back the next morning and doing typical Thetan stuff like spiking his coffee with gin or spiking his gin with even more gin. L. Ron then decided to do what any of us would've done in his position: he started his own navy. Members of his personal navy (called the "Sea Org") were given very fancy uniforms and strict instructions to not crash the boat into the sun. This made everybody terribly excited, and they naturally assumed what any of us would've assumed in their position: L. Ron was going to board an atomic-powered spaceship and fly out somewhere into space. It turns out they were slightly wrong though, as L. Ron never successfully got his mothership functioning properly and instead had to settle for the next best thing which was dying as an insane wacko who lots of other insane wackos obsessed over. 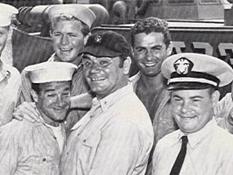 Some members of Sea Org pose for the camera.

Before L. Ron had a chance to die, he spent his remaining years wearing dorky naval hats and creating new rules for Scientologists in his elite Sea Org. If you didn't abide by the rules, you had to pay money. If you abided by the rules, you had to pay even more money. If you forgot what the rules were, you were given a list, but it cost a lot of money. However, the benefits for giving Scientology all your cash more than made up for it:

You got a hat

And that was for the ADVANCED members of Scientology. The other, non-advanced people just got to stand around a lot and wish they were advanced. If you complained, L. Ron threw you off the deck of his boat. If you got back on the boat and complained again, then he threw you off the top deck of his boat. The non-advanced people had to settle for the plain vanilla version of Scientology Lite, which is like Sea Org only without the boats and suits. Scientology Lite is psychotherapy designed to rid the human body of alien "Thetans" which are souls of dead people who have been blown up by atomic bombs millions of years ago. We all have inner Thetans that tell us to do horrible things like smoke or steal or loiter. We can only be free or "clear" once we've tricked these Thetans into leaving our body and going away. Where do they go? I don't know. Probably Florida. Thetans like the humidity there.

Scientologists "audit" people, allowing them the freedom to realize that in reality everybody is conspiring against them. This is something the evil Thetans don't want people to know because the Thetans are "the Man" and as you know, the Man is always keepin' you down. Your inner Thetan can only be "audited out" by forcing him to telepathically experience being blown up by a hydrogen bomb. I imagine you just pay a few hundred thousand dollars and they lead you to a special movie screening room which shows footage of a bomb exploding with really big words that read "YOU ARE HERE, MR. THETAN!!!" and there's an arrow pointing to inside the explosion. You can buy popcorn at the theater there, but it costs $500 and doesn't come with butter.

So that's Scientology in a nutshell. Note that when I write "nutshell" I am simply using the old saying and I am in no way inferring that Scientologists are nuts or they should be shelled. Whew, I barely got out of that one alive. Now all I have to do is check my freezer for frozen beers.

As mentioned before, Zack and I don't make enough money from this site to be a successfully Scientology member. We have given up our quest to become level OT-C-423-XMI-ULTRA-PLATINUM members of the "church," and have instead devoted our time to spread the good word of Scientology online. With this in mind, I have created the ultimate "thank you for just being you" tribute that can be given on the Internet. Yes, that's correct, I have written Scientology Fan Fiction.

"This is Chase Hardrock, Scientomologologist Warrior," he proudly stated while brushing back his illustrious brown hair which had grown to new lengths and became much more handsome and flowing ever since he graduated to OT IV.

"Chase! This is Clair at Sci-Base 7, the floating Scientistalologoimistriology base above the Atlantic Ocean! We need you up here quickly!" Chase recognized Clair's voice instantly because he had heard it before and had wisely decided to remember it. "Those pesky Thetans are up to their old tricks again!"

Thetan. The mere word itself made Chase's skin crawl, which happened because a Thetan floated around and began prickling his skin with Poison Thetan Needles, which is a good reminder to the fact that Thetans are everywhere and can attack you no matter how well protected you are. Even if you wear a ski coat and a bunch of scarves and lock yourself up in the bathroom, the Thetans can still get you. You can put up a sign on your door that says "NO THETANS ALLOWED" but they'll still come in anyway because they're evil and superintelligent, like Lex Luthor except Lex Luthor isn't a ghost and can't pass through bathroom walls. Chase ripped off his jacket to reveal his Clari-T-shirt, which immediately scared away the weak and cowardly Thetans.

Wow! If this doesn't make you like Scientology, I don't know what will! Head on over and audit your inner Thetan!