What Cliff Yablonski did for Halloween

Hey there assbuffets, this is your hero Cliff Yablonski writing this computer news article today. Those drooling spermbanks Richard Kenyaka and the other guy, what's his name, Hank something, asked me a few weeks ago if I would write about what I was doing for Halloween. I told them to sit and spin on a street sign because I got better things to do than write shit on my computer TV. Then I beat that Hank guy with a shoe that was on the end of a piece of lumber out behind the creek. But my TV fucking busted yesterday and I spent all day fixing it and it still didn't start working after I used my magic repair method of kicking the unholy hell out of it. So I was just sitting around pounding shots of gin and I realized I didn't have anything better to do so I decided to write this shit for them so maybe their crap-ass Inter-web thing won't be as terrible as it usually is. I don't understand any of the crap on this page and think anybody who reads this shit is just a pedophile looking for 10 year old boys to molest over the Inter-web, so believe me when I say I want to tear out your ribs and hide them like Easter eggs around my livingroom.

WHAT I DID FOR HALLOWEEN BY CLIFF YABLONSKI 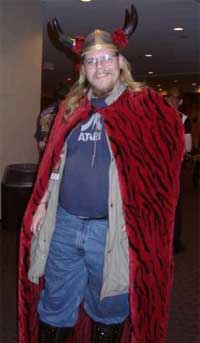 Lord Lardpants strikes a blow for justice with his unspeakable gut.

First off for my Halloween preparations, I festively decorated my yard with barbed wire and the usual "NO TRESPASSING" signs. Since the cretin shitheads obviously found "NO TRESPASSING" too hard to understand last year, I took a magic marker and drew a picture of a person without a head, and a picture of me with a rifle. Then I wrote the word "YOU" in huge fucking letters and made an arrow pointing to the headless kid. I wrote something else below that too, but I can't read my writing now. It looks like the words "cabbage frame", but I don't know why the hell I would write "cabbage frame," although I do like cabbage. The next door kids got heads like giant wads of cabbage, only cabbage isn't as goddamn retarded as they are. Plus you'd have a better chance holding a conversation with cabbage than those flailing shitbusters.

Anyway I threw barbed wire all over the place and turned off all my lights because I don't pay to light up the entire neighborhood. And if the city council thinks they can keep putting street lights outside my house, well they can keep paying to put them up again after I hack them down with my fire axe I found locked up in the fire department. I wanted to make it crystal-fucking-clear that it's not my priority to entertain and give free food to the roving packs of gelatinous failure that crawled under bedsheets for Halloween just so they could take my hard earned money. Now if any of you mentally challenged inbred dirtwagons out there have have an active braincell, and you probably don't, you can probably guess what happened next. That's right, the old Yablonski doorbell goes ringing.

So I get up and go to the door and open it up and see some fat gutslug rotting away on my porch, wearing some 500-foot wide pool tarp and holding a plastic pumpkin. He screeches "trick or treat!" and I look at him and look up and see his dad standing behind him, so I says "nice costume you got there, shitstain. You're dressed up as a truck full of hogs underneath a circus tent, right?" Then his pencil-necked dad steps up to me and says "what did you say to Beanfactory?" I forgot what the kid's name was so I'm just going to call him "Beanfactory." Anyway the dad starts acting all mouthy and makes a motion like he was going to either punch me in the face or run away with his kid, so I grab the end table that I stole from the Patterson's house three weeks ago and throw it at his head. Well the thing pretty much misses since it was dark out and I was tired and my arm was sore from bringing the whisky bottle up to my mouth over and over all night, so only the leg of the table wings him across the face. I say "you want to fuck with a veteran, buddy?!? Are you ready to take on THIS?!?" and I picked up what I thought was award the military gave me for shooting up all those Jap planes but instead it was the plaque I stole from the Patterson's house three weeks ago. It says something about tit cancer awareness on it. So anyways I was holding up this tit cancer awareness thing and I said, "that's right you pinko commie Russian, I'm aware of tit cancer!" and I threw the thing at his gut. It was a direct hit and it made him limp back to whatever meat factory he and his hellspawn broke out of. 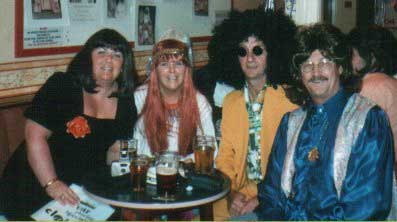 Haw haw, they're dressed in 70's clothing and they're all in their late 70's, how hilarious.

I go back to my chair and sit down because all that excitement was making my stomach turn. I got that acid reflex shit were my gut starts spewing out acid everywhere like that movie about the aliens and when you killed them acid flew everywhere because they had acid inside of them. I think that movie was called "Watch Out for The Acid!" or something. After a few relaxing shots of gin, I'm about ready to go to sleep when, yeah you guessed it, the goddamn doorbell rings AGAIN. I fall out of my chair and go over to the door and open it up and just scream "WHAT THE FUCK DO YOU FILTHY WHORES WANT?!?" and I see more doomed trashwads of kids out there, asking for candy like homeless people begging for crack money. Well I had enough of that so I go "you guys want a treat? You want a treat? Well here's your fucking treat, fresh off the SS Fuck You Express!" Then I dumped this shit into their bags: 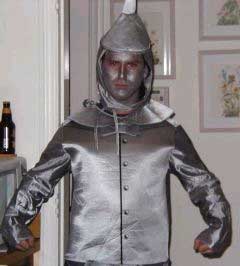 Then I kicked one of them in the face and booted their underage asses off my lawn. They left their bags behind, so everything worked out well. There was some pretty good shit in there too, like that chewy peanut butter candy thing with the shit inside that tastes like that one thing with the topping on it. I can't remember the name, it's made by that candy company, whatever it is. So I could tell I wasn't going to get any rest tonight in my OWN GODDAMN HOUSE, so I go up to the attic above the front door and I open the window and start shouting "NEXT FRUITFUCKER TO STEP ON MY LAWN GETS A TASTE OF WHAT KILLED OVER 1300 JAPS IN WORLD WAR ONE!!!" and then I started flexing my arms to show off the Big Yablonskis I got. Next thing I know I fall through the window and roll down my fucking roof to the gutter. My military jacket I was wearing snags the nail on the shit gutter, and I'm just hanging there with my arms up above my head with my jacket stuck on a nail. I couldn't move or any shit, and my acid reflex felt like I was going to just explode in a shower of bile at any goddamn second. So I'm hanging there and another pack of braindead cretins comes up and says "look at that scary mummy hanging from this house!" and they notice my door was open (I forgot to shut it) so they go in and start taking candy out of the bags I liberated from the previous Dunce Patrol. All the time I'm hanging up on my gutter, swinging back and forth trying to get down, feeling my gut acid rise while I curse like a Tourette's Syndrome retard in a hailstorm. They come back out and I try to wrap my legs around their scrawny necks so I can snap them like celery, but the fruitcake gang takes off before I can convince them to get in between my legs. And if you read that and thought I meant something sexual with it, maybe you should use your pork-filled, snot encrusted finger to move your mouse and click on the link to my site. There's abso-fucking-lutely nothing worth salvaging in this damn city, and I've seen kitchen appliances with more sex appeal than the lardbakes in Appleton City

A couple smartass kids dressed up as police officers came by an hour later and tried to help me down, so I cursed at them and tried to implant my boots into their eye-holes. They kept saying wussy shit like "sir, we're only trying to help you, sir" so I said "yeah, well I'm trying to help your head escape from the rest of your body!" and I kicked what I think was one of them in the face, although it might've been my garage door. Then I hear something like "use the taster" and I hear a zapping sound and then I wake up in my living room and it's 4:00 am. I don't know what the fuck happened and how it got to be 4:00 am so fast, so maybe it was some Halloween shit like the Blared Witch got me. Oooh, how spooky. Right, whatever. So that was my Halloween.

Before I end this magical fucking hayride of joy, Hank wanted me to post my recipe for Halloween beer so I'm going to. I know that none of you two legged lunchmeats have the intelligence or skill to follow these simple instructions and make Cliff's Halloween Beer, but I don't give a pig-fucking damn.

INSTRUCTIONS:
Drink the 2 six-packs while emptying out the pumpkin and filling it with gasoline. Mix in the roofing tar on the top, then reseal the pumpkin with the top part. Jam a sparkler inside the pumpkin and put the pumpkin on somebody else's porch. Ring their doorbell and say, "oh look, a festive Halloween treat, you sit around here and enjoy this, gutterball" and light the sparkler and run. If you're wearing the long pants and protective eyewear, maybe you won't ruin your normal clothes with the pieces of body parts that should be covering the surrounding 500 foot area.