The Christmas holiday season really piles on the stress and frustration for all the hellbound non-Christians in America. I should know; I've experienced these hardships firsthand and am painfully aware of how difficult life becomes as we approach December 25th. Growing up in a town full of Catholics was particularly depressing for me since my parents are practicing Wiccans and baptized me as one during their "Ceremony of Infinite Glorious Fire and Blood" upon birth. While all the other kids in school were busy writing their Christmas lists and bragging about the high tech, awesome toys that were due to arrive under their trees in a scant few weeks, my parents forced me to harvest small bricks of unrefined ore inside Vex Thal. I don't mean to sound bitter, as if I harbor some kind of intense grudge against my mom and dad for giving me an oaken barrel full of leaves and pinecones every Christmas season, but I wish we could've had a normal holiday celebration at least a single time in my childhood, one that didn't force me to run through Queen Burrower's Gauntlet while reciting the eight Sabbats.

Scientologists experience a particularly painful holiday season each Christmas. While their friends and families are out celebrating the birth of Jesus Christ through the time-honored tradition of purchasing jewelry and eating at Applebee's, members of L. Ron Hubbard's church must spend 12 consecutive hours inside a "Thought Tunnel," a small closet full of paint buckets and mops, while a group of official Scientology representatives ranked level 17 or higher flip the light switch on and off, make ghost noises, and repeatedly bang on the door shouting "MOM'S COMING!!!" This procedure is said to help clear their mind of "conflicting conflicts," and if it doesn't additionally entice the participant to write a large check to the Church of Scientology, then they are strongly encouraged by armed guards to spend an entire day inside the Citadel of Deep Introspection and Diseased Bats.

So how can good Christians across this great country of whatever help the kind but religiously misguided followers of Xenu enjoy the miracle of Baby Jesus stealing pumpkin mix cans from the Three Wise Men? I feel that Something Awful, a site created with nothing but compassion and community service in mind, can help bridge the gap between these two religions and allow members from both groups enjoy the dynamic rewards each church has to offer. I have put together this official Scientology Holiday Gift Guide so selfless Christians can help spread cheer and good tidings to their brothers who would otherwise spend the holiday reading novels about alien dinosaurs taking over the Earth and forcing humans to change the oil on their UFOs. 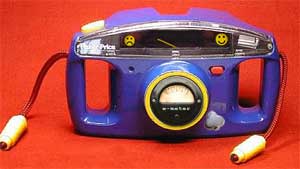 "My First eMeter" introduces both children and mentally incompetent adults to the exciting world of Thetan auditing, also known as "the removal of ghosts" to people ignorant of L. Ron Hubbard's magical mystery mind. Get your children aged 1-7 detecting evil liar alien ghosts as soon as possible with My First eMeter, a fun toy both technologically advanced and crammed full of addictive fun! No, seriously, it's literally addictive; My First eMeter secrets a mixture of neurotoxins and alien spores every 10 minutes to ensure your child never loses interest with their fascinating and highly religious device manufactured to be both flame retardant and waterproof.

You'll never have to worry about Junior misplacing My First eMeter, as HubbardCoIncLLCLtd engineers have programmed the device to emit a series of playful supersonic beeps and whistles capable of shattering glass and human eardrums miles away if the device has been inactive for 30 minutes. If mischievous little Junior ever attempts to purposefully or non-purposefully damage his My First eMeter in any way whatsoever, it will promptly punish him by activating the shiny Silver Shamrock decal next to the meter, causing his head to cave in and send out a lighthearted wave of scurrying beetles, snakes, and crickets from the mushy pulp previously known as his skull. This patented Silver Shamrock technology was created by L. Ron Hubbard in 1982 after his trip to Stonehenge, where he claims to have "bested a man-octopus in hand to hand combat" and "discovered important secrets to becoming a better dungeon master." 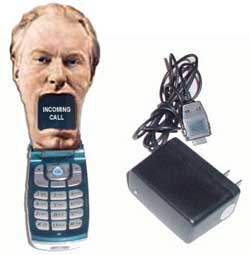 Most of a child's development occurs during the toughest years of their life, the teenage years. Scientologist kids have to deal with peer pressure, conflicting emotions, sexual discovery, and the startling awareness that comes with learning we are all fighting a neverending battle against an evil galactic overlord who created Earth by dropping atomic bombs on volcanoes and shooting rockets full of headcrabs into crowded urban landscapes or whatever. Why not help a struggling teenager fit in with the "hip crowd" by giving them the hottest gift on any kid's wishlist this season: a new cellphone crammed full of the hottest new technological advancements and features! Thanks to Scientology's restless engineers "borrowing" technology from alien cultures and Cthulhu, the Hubbard MindPhone 2000 comes with an assortment of powerful tools guaranteed to ensure instant popularity for any teen lucky enough to own one. Check out this brief list of features that come with every MindPhone:

Keeps track of every number you call and relays this information to Sea Org Branch #245 (Communications Division), a seemingly abandoned oil drilling station in the middle of the Atlantic Ocean, equipped with surface to air missiles and black hole generators (used to keep the evil man-octopuses at bay).

Keeps track of everything you say and relays this information to Sea Org Branch #639 (Monitoring Division), a seemingly abandoned research station near the North Pole, outfitted with automatic sentry cannons and anti-gravity L. Ron Hubbard heads which float around and monitor the surrounding 30-mile radius for intruders (penguins disguised as humans disguised as penguins).

Keeps track of everything you do with the onboard 6-gigapixel camera and relays this information to Sea Org Branch #141 (Human Information Division), a seemingly abandoned Sears in downtown Independence, that has no defenses because, honestly, when was the last time anybody ever went into a Sears? Seriously, I don't think Sears has sold anything in over a decade. Their store windows are nothing but a bunch of television displays welded together showing a continuous loop of an actual home appliance shop in Iowa which went bankrupt in 1998.

Thetan ID system lists the number of Thetans possessing anybody who calls you without Thetan-blocking software installed. When coupled with a MindPhone 2000 Mobile Auditing Unit (MAU), experienced Scientologists level 23 and up (saving throws against meteorite attacks required) may successfully de-Thetan-ize friends and family over the phone for the low, low charge of $59.99 every minute, or $100 per Thetan. Additional charges may apply, including the Living Human Being surcharge and the Pay Us To Not Make Your Phone Explode fee.

Onboard 20 gig hard drive allows your phone to store and constantly update a list of those conspiring against you by making fun of your religion via email or crappy "humor" websites. Pressing *91 automatically sends a lawsuit to each and every person on this list, giving them 24 hours to remove offending material before a swarm of winged lawyers sweep into their residencies and immolate all family members with their laser eyes.

The Hubbard MindPhone 2000 comes with an assortment of cheerful ringtones including the hottest sea chanteys sweeping the Billboard charts by storm, and all your favorite L. Ron Hubbard Star Sound tunes such as "Muzambe Woman" and "The Perilous Caves of Tralfamadore." 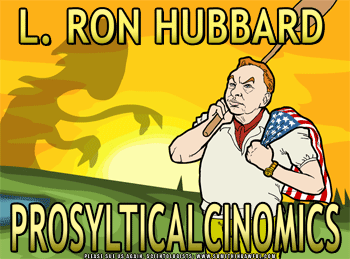 Did you know that L. Ron Hubbard wrote over 6,362 books during his lifetime? Did you know that even after dying in 1986, he continued to pen over 84 full length novels, transmitting entire volumes of information through his Magic Soul Crystal? "L. Ron Hubbard: Raw and Unreleased" is a series of 20 or 30 books which appears to be constantly growing and multiplying in quantity virtually every hour. These full length novels have been put aside and reserved for a special release this holiday season, in memory of Hubbard's 40-foot tall mutant spider-giraffe hybrid "Squeaky" which recently passed away due to complications with childbirth. This set includes, but is currently not limited to, the following L. Ron Hubbard original masterpieces:

Yar, Here There Be Robots

Geneticology: The Key to Understanding Mankind's Craze for Velvet

An Expert's Guide to Sea Chanteys for Beginners

How About Some Hubbard In the Cupboard: 101 Easy Recipes for Bachelors

One Man's Tribute to Bill Keane

Here is a free sample from one of Hubbard's unreleased science fiction novels, The Computerized Robot, a chilling tale about a robot MADE OUT OF COMPUTERS.

The Computerized Robot is approximately 1,034 pages long, although many scientists predict it will have grown to at least 1,127 by the time you read this.

With your help, we can make this Christmas season truly a time of brotherly love for our Scientologist friends and family members, assuming their religious representatives will provide us with the address of the concrete bunker they are stored inside. Just keep in mind that Scientologists were once human beings like you and I, and despite the fact that they are now crammed full of ghosts and aliens and time traveling zombies or whatever, they still have feelings. Sure it's the feeling that they'd like to break open a newborn infant's skull and feast upon its brains, but it's still a feeling. If you're particularly generous, you can get me a Christmas gift as well, one that isn't made of maple syrup and various other essences of mother nature's limitless bounty. I swear I'm going to strangle myself if I have to dance naked around a fire to celebrate the goddess of nature one more time.