The very qualities that make Superman the prototypical hero also make him sort of boring. He's pretty much unstoppable. He likes to save people because he's nice, which is awesome, but that's the extent of his personality. His darkest secret? He feels guilty for not being able to save everyone.

For every good book like Red Son or The Superman/Madman Hullabaloo, there are hundreds of stories where Lex Luthor comes across more of the incredibly rare Kryptonite and uses it to make something stupid like kryptoteeth for an army of bank-robbing robots. There hasn't been a decent Superman movie in decades, and there has never been a good Superman video game.

The dude needs to be redesigned. DC Comics gave it a shot in the early 90's by "killing" Superman and throwing a bunch of embarassing replacements at the wall to see if any stuck. Remember this guy? 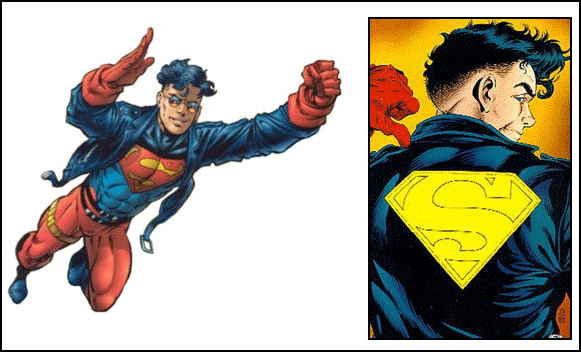 For some reason, he didn't resonate with anyone. At all. DC hoped the second belt would be enough to win over the hearts of fans, but in hindsight they should have redirected that effort into a thigh-belt for his left leg.

With the bar set so low, I feel pretty good about sharing my own ideas for a reimagined Superman.

When his home planet blows up, a baby Superman is launched into space via tiny interstellar ejection seat (how paranoid do you have to be to own one of those, and how cheap do you have to be to not invest in a slightly bigger one for the rest of your family?), eventually landing on Earth.

The part about Superman being an alien is good, but the rest has to go. Here's my artistic vision:

American astronauts discover a young man on the moon. He has amnesia, and cannot explain how he came to be on the moon or for how long he had been wandering its surface, clutching a mysterious red cape around himself for warmth. He has random flashbacks of a mysterious past that he cannot quite piece together.

When the shuttle disintegrates during re-entry under mysterious circumstances, the young man is all that's left. He honors the shuttle's captain, Buzz Superman, by taking the brave astronaut's surname as his own, and vowing to find those responsible for the crash - be they human or something else entirely. Like birds. Or aliens.

Small scale threats (which can make for some fun and creative stories) pose no challenge for a nigh-invulnerable dude, and putting him to the test against one cataclysm after another gets old fast. Superman's abilities need to be scaled way back so he can face a wider range of obstacles.

X-Ray Vision
Replace with the ability to operate an x-ray machine with incredible competence.

Flight
Keep this, but make Superman rely on a refuel mechanic. For every hour of flight, he has to pray for five minutes.

Super Speed
All the Flash can do is run fast, and currently Superman can keep pace with him. Not cool. Reduce Superman's top speed by half, and make it so that every time he gets ready to run, he does that "legs spinning in place while bongos play" move for a few seconds.

Cold Breath
Keep the same, but make his tongue extra vulnerable to cold so he thinks twice before using the power all nilly-willy.

Super Strength
Superman has got to be able to lift cars and trains and whatnot, so this won't change all that much. Just make it so that his face strains a lot and he essentially turns into one of those guys that get angry when they move furniture, with lots of grunting and snapping at people to tell him where he should put down whatever he's carrying.

Nigh-Invulnerable Skin
Make his skin normal, only airtight (to explain how he survived on the moon) and make his cape completely invulnerable so he has to use it as a shield.

Clark Kent? Played out. Leave the civilian alter egos to lesser heroes. This is Superman. From now on, when he isn't fighting crime, he's Spider-Man. 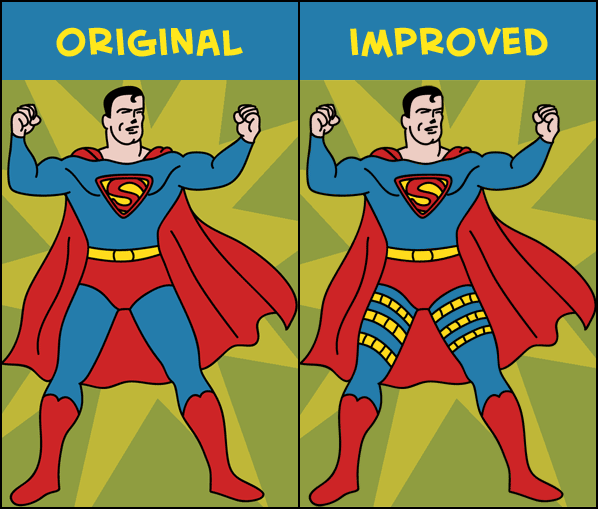