Superman is a Tool 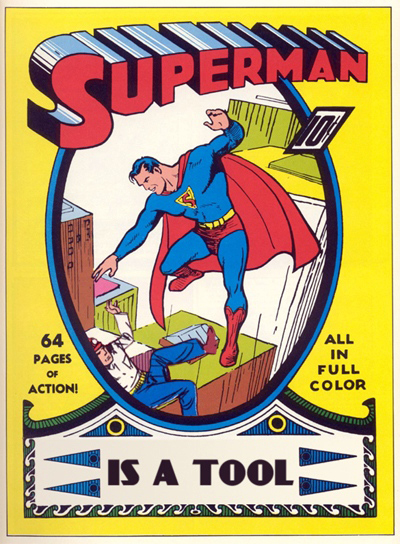 An attempted terrorist attack outside the Daily Planet has just been foiled by Superman. While his co-workers Gary and Dave are still marveling at what they just saw, Superman, having re-assumed his Clark Kent secret identity, saunters into the room putting on his glasses, a wry smirk in the corner of his mouth.

SUPERMAN: Hello fellas, what did I miss? That terrorist attack still happening?

GARY: Clark, you just missed the awesomest thing! Superman was here and wasted those psychos! It was nuts!

DAVE: What happened to you, man? We turned around and you were gone.

SUPERMAN: (hiding smile) I had to go ... to the bathroom.

GARY: You know, it's funny how you're always in the bathroom when Superman shows up.

SUPERMAN: Oh? That is kinda funny ...

DAVE: I think it's even funnier that whenever something scary happens, you just run away like a complete fucking pussy.

GARY: Yeah! Even when you're not in any danger at all. Remember when we saw that purse-snatcher outside the Plymouth Tower? He was running away from us, yet you blew the scene anyway!

DAVE: I forgot about that! Jesus. How does one become such a colossal pussy, Clark? Bad parenting?

Dave and Gary give each other a pound, laughing. Superman heads for his desk. 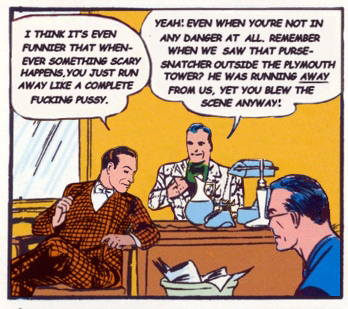 SUPERMAN: Ha ha. Very funny, guys. Good laugh. Now, let's get back to work. I better write up a piece about that terrorist situation.

GARY: Right. You gonna describe what you heard over the sound of your own crying and shitting?

Dave and Gary laugh some more.

GARY: It's a good thing Superman's always around to save our ass, cause you know this chickenshit isn't gonna lift a finger to help.

DAVE: (imitating Clark's voice) Oh gee! A kitten is stuck in a tree, I better go take a shit!