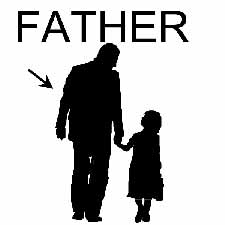 So as to distinguish him from a child abductor.

It's only a month after Mother's Day, and already it's time to shove aside the women who gave birth to us in favor of the guys who kind of hung around from time to time to make sure we grew up alive and... well, alive. That's right, it's Father's Day, the twenty-four hour period when dads everywhere finally get the attention and praise they so solely deserve. After all, they slave day after day, week after week to put bread on that table, and it's about damn time you showed them some respect, young man! Of course, it would be on a Sunday, too. No, it would be too much to ask to give them a day off, wouldn't it? Lord knows, if they missed work just one day to take a little time for themselves, this whole freaking family would starve to death! What, now you want to borrow some money? Money doesn't grow on the goddamn trees, you know! And turn down that music! Where do you think you are, the circus? For Christ sake!

Sorry, that last paragraph got a little weird. I'm... uh... I'm working through some issues. Anyway, a father has a very special and unique relationship with his child. The mother is the one who does the actual birthing, and with the exception of a few guys out there who frankly give me the heebie jeebies, only the mother is capable of nursing the child. Biologically speaking, the father's role ends right after fertilization, just before he falls asleep. But of course, the father plays a critical role in the development is a child, which is why kids who grow up without fathers are all angsty, overly aggressive types to compensate for the fact that they're all really sissies. I'm just kidding guys! Seriously, put the guns down. A father's relationship with his daughter is certainly a very precious thing, but as far as I can understand, it mostly revolves around his trying to figure out whether or not it's a good thing if his daughter grows up to be hot. I don't know too much about that, so I'm basically going to ignore the father-daughter relationship for the rest of this article and talk about that extraordinary relationship between a father and son. 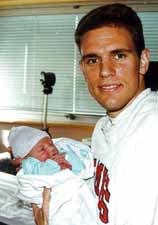 Look at this proud father. Look at his face. Then look at the face of the infant in his arms. Notice how they look nothing alike. In fact, that kid kind of reminds me of the mailman, don't you think?

There is an unspoken bond between a father and his son, basically because if either party were to talk about it, the other one would think that he's kind of fruity. Just as a mother is the only one who can really teach a daughter to grow up to be the colossal bitch she will inevitably become, only a father can show his son what it takes to grow up to be a responsible and capable man. Most fathers try to instill a sense of the manly arts in their sons through athletics. I think every father dreams of his son becoming a major sports star. I know my father certainly encouraged my brother and me to try our hand at various league sports over the year. He was always there for my Little League and soccer games. Of course, now my brother is an artist and I write for a website, so you can tell how well all that worked out.

From my father I learned what it means to be a man. Primarily, it means to have a penis. We covered that lesson in one sitting. The rest of his teachings - at least, the ones that always stuck with me - were more along the lines of, "Okay, so we've established that you're a man. Now what do you do with that manliness?" Those are the lessons that made me who I am today. I can't catch a fly ball without at least a week's warning, I haven't been fishing in years, and I have a fine appreciation for theater, but I'll be damned if I can't fart with the best of 'em. You see, anyone can up and get gas, but only your father can teach you how to use it. Ironically, that actually doesn't hold true for my father's childhood. We always used to joke that he learned to rip juicy ones from his mother, but that's only because his father died at a tragically young age and his mother ate a lot of cabbage. In any case, any expertise that I have in the field of butt percussion is due totally to the hard work and ceaseless efforts of the man I have come to call Dad (you know, my father).

Speaking of music, if there's one clear trait I inherited from my father, it's got to be a love of classic tunes. The Beatles, the Stones, Hendrix, the Doors - I wouldn't know the first thing about any of them if not for dear old dad belting out the songs every time we took a ride in the car. Nowadays I can't help singing along with the radio when I'm out for a drive, just like my father, although I have the good sense to resist the urge when I'm in the car with other people. Actually, I'm sort of envious of my father's ability to sing his heart out no matter who's in the car, including that time in ninth grade when he was driving me and Jenny Collins to the dance. Sure, she broke up with me later than night and went home with Tommy Belawski. Sure, it ruined my only chance with the hottest girl in school. I mean, it was Jenny Collins, Dad! Jenny Collins! But I know he was just being himself, and that means expressing his love of music. I grew up with an appreciation for the best music the world has ever known, and that's why this Father's Day I made my father a CD compilation of great songs that I think he'll really love. Check out this track list: 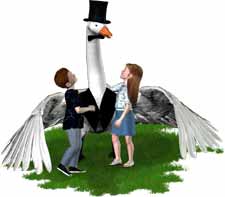 Not too bad, huh? I think the mix of clever lyrics and simple, yet infectious riffs will transport him back to his college days. But don't tell him. I want it to be a surprise. I put a lot of thought into this. After all, he's my father. He's more than just the guy who pays my exorbitant tuition. He's roughly half of the reason that I'm here. He's the man that I can only hope I can grow up to be. He's the person that I look up to and try to emulate. Hell, that's why I shaved my head! Well, actually, I shaved my head because I was starting to emulate him a few years ahead of schedule, and I wasn't going to let genetics have the satisfaction. As I was saying, I have an enormous amount of love and respect for my father, for all of his hard work, dedication, support, and mostly because he's not this guy:

AN Emirati who has 63 children has married for the 12th time in a bid to ensure his place in the Guinness Book of Records with 100 offspring, according to a newspaper report.

And his name is Dad. 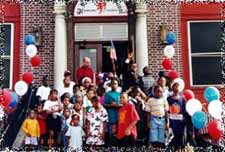 Murad likes to get as many of those pesky birthdays as possible out of the way at once. Tomorrow they celebrate the birth of all kids N-Z!

Murad told the daily that he had divorced four of his wives, while four others had died.

The new bride will join three other wives living in four houses provided by the ruler of Ajman, who supplements Murad's army pension.

"I hope to have 100 children and get in the Guinness Book of Records," said Murad, who thanked a diet of fish and dates for his stamina.

Don't get me wrong, I have to give it up for a man who has managed to get sixty-three kids out of twelve women by the time he's fifty-three. That's pretty impressive. If he hits the one hundred-mark, it will be a momentous occasion not just for him, but for men everywhere. I mean, that's a lot of nookie and nookie byproducts. But there's something horribly, horribly wrong with having kids for the sole purpose of getting into Guinness. And that's precisely why he's doing it. Nowhere in the article does it say anything about Murad wanting to raise his children to be future leaders or Olympic skiers or anything along those lines. He basically impregnates women until they either die or get wise to his scheme and divorce him, then moves on to the next one. Imagine being one of those kids and growing up knowing that you're just one of ninety-eight middle children who only exist on this planet so that your father could have a one-line mention in a records book. That's got to give you a complex. So thank you, Dad, for not having me and my brother simply to get your name in print, or if you did, thanks for stopping after two. Happy Father's Day to you and to all of you fathers out there, including the lucky guy who bought Dennis "Corin Tucker's Stalker" Farrell's white baby boy in yesterday's sale. Good luck with that. I hear the kid is nearly disease free!