If you're a regular reader of Something Awful, you've undoubtedly noticed a shift in the placement and volume of advertisements adorning the site over recent months. Here on the front page alone you'll find two banners and a text ad for J-List, a large Google ad between each update's title and content, an Amazon search bar, and several links to SA merchandise. That's not counting the unrelenting barrage of intrusive and possibly illegal advertisements in our forums, which have stirred up quite a bit of controversy lately. Why the heck do we have so many ads?

Something Awful doesn't need money. We've secretly been funded by Derek Smart for years. In exchange for state of the art webhosting and forum software that could only come from a man with a brain so large that his ptuitary gland has evolved into a load-bearing muscle, we agreed to stop making fun of him. Why else do you think we haven't mentioned Dr. Smart in years despite his continued relevance?

The real reason for all of these ads? That, I'm sorry to say, would be me. You see, I really want these shoes. 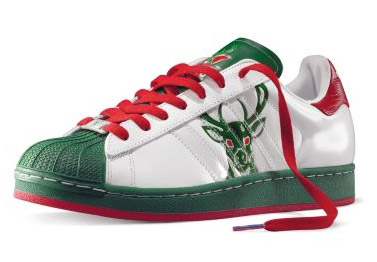 If there's one thing I have learned from my father in all the years that he abandoned me and never called or sent a card for my birthday or gave blood when I needed that transfusion, it's that finding a tennis shoe with a red-eyed deer on its side is a once in a lifetime opporunity that you should never pass up. This is my one and only time to shine.

I haven't taken the time to look up how much these shoes actually cost, so to be on the safe side we're hoping to generate $3,500,000 over the next year by clobbering you in the face with advertisements, and also clobbering your forearms if you raise them in front of your face in a futile effort to defend yourself. We're about three million dollars shy right now, so our efforts will really ramp up in the coming weeks.

To help you prepare for the upcoming ad holocaust, I'll give you a sneak preview of the numerous changes coming to the site.

Thankfully, the front page itself will remain the same for the most part. The layout, color scheme, and menus will be exactly the way you see them now. The only change, and it's really a minor one, is that all of our articles will be removed and replaced with full screen Flash ads for Fleshlights and insurance policies that protect your car from mudman attacks. Since our sponsors feel that any Flash content might be confused with their ads, Shmorky's Flash Tubs will be replaced with rambling, unbearably long text ads for bulletproof replica Storm Trooper uniforms. With all the Flash animations, annoying text, and excessive Star Wars references you come here for remaining intact, it should feel like nothing changed.

Our forums have already begun their transformation. Last week we unveiled AdBot, a new feature that posts a random catchphrase and three text ads as the first reply to every single thread. We asked everyone what they thought of AdBot and almost everyone jokingly replied that they hated it so we decided to give the people what they want and follow it up with several more automated ad posting bots. Here's a preview of what a typical SA forums thread will look like next week: 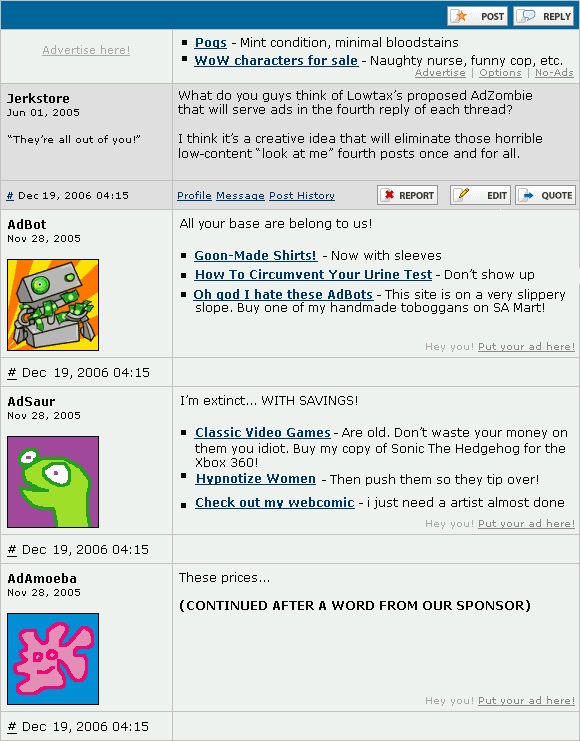 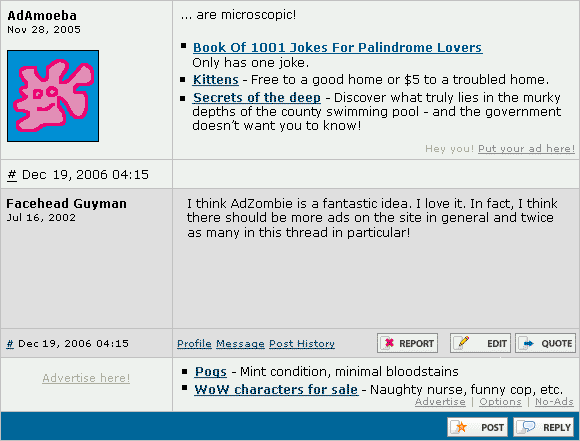 The future looks pretty great, right? If you're in the minority that doesn't think so, there's something you can do. Overly sensitive forum members can block banner ads and AdBot by upgrading their accounts with NoAds for a one-time fee of $5. They will also be able to purchase NoAds Platinum for $30 to block AdSaur, AdAmoeba and AdZombie. Once we've perfected an exciting new feature that will scramble all of your forum posts into an unintelligible mess littered with clickable keywords chosen by our sponsors, you will be able to disable it by buying NoScramble for $80.