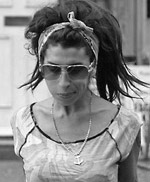 Amy Winehouse is a British singer-songwriter best-known for her Grammy-winning 2006 album Back to Black and the hit single "Rehab". Winehouse is a controversial media personality notorious for her drug use, unusual medical ailments, and inappropriate behavior. She writes to address her critics in the press and on the Internet.

The media always has to crucify someone. It's the same story again and again. Some sweet innocent damsel corrupted by the business. Marilyn Monroe, Britney Spears, Jackie Onassis, and now it's me.

I accept it, because if it wasn't me it would be some other trollop showing her fanny off to cancer kids or doing a diarrhea on a turtle. The tabloids has to have a monster so it's me. 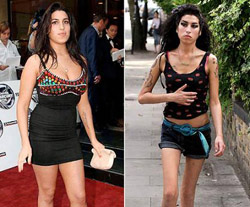 That doesn't mean I have to like it. Right? You see the way they blow everything up. Everything I do is major.

You post up one Youtube putting a baby in a cage and suddenly you are a terrible godmother. They didn't know what that baby done before I put it in the cage. Maybe it bit somebody. Maybe it called me a cunt. Did they ask? No. They don't care.

They even claimed the video was filmed in a crack den. Excuse me, it was not. It was a meth den. There is a major difference. The decorations are all different. And I get my crack from a van pops by twice a week now anyway.

Oooh, she does crack. Look at her, the strumpet! Doin' drugs! Now, now, don't you have a pint some nights? A brandy? Take some pills for your blood pressure? Those are just drugs "society" says is fine. 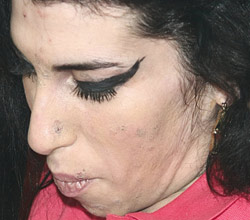 Crack is just me medicating. No different than those drugs those kids I showed my fanny to was on. Stoned out of their gourds, the minging little twats was. Barely woke up when I did that shit on that turtle.

Ohhhhh, but her skin is covered in sores and her teeth went off and she's skin and bones. Look at her. Look at this before and after. Fat as a hen she was and now she looks like a fly strip hanging in a curry shop.

Those kids were just as bad. Little villains. I bet they cop a hit whenever those nurses wasn't looking. Snorting up some of that radiation dust. You could see it in their eyes. Glassy as marbles.

If you do that much you're bound to end up with tubes in you. Usually you're not in hospital, you're in the back of a bus with a roadie from Stoke-On-Trent who smells like cabbage and knows a Paki with pure hash. And the tubes aren't plastic.