Four Reasons Why The Super Bowl Sucks And I Hate It 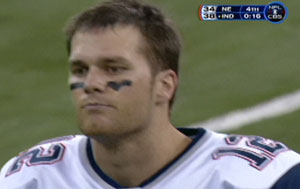 GOODBYE TOM Unlike regular football, which is aired for the enjoyment of a few idiots, the Super Bowl caters to every idiot. Someone who has never heard of American football until the day of the Super Bowl will watch the game for ten minutes and instantly become a retarded sports almanac. If you know anything about sports he will corner you and talk to you about topics like “that one guy running real fast”. He will ask you if the blue and orange lines on the field are fiber optic grass. He'll make insights like “the guys in the blue shirts would have won if they scored more touchdowns.” He'll buy your favorite team's jersey just to impress you and point it out to you every time he wears it. When he asks you about the player he's repping and you say it's a third-string linebacker the team traded last season, he'll ask if “that's the guy who throws the ball”.

Then there are the people who say they watch the game for the commercials. These are the same people who say they go to Hooters for the wings and read Playboy for the articles. They are the most uninteresting people on the planet. They don't watch for commercials or football. They just want to be sure everyone knows how irreverent they are. By their estimation the Wacky Police should put them in Cheese Monkey Jail for being the one person in America to not watch the Super Bowl for football's sake. You know, except for the ten billion other unoriginal fags who say “I'm here for the commercials” and spend the rest of the game quoting their favorite YTMNDs.

Reason #2: Chicagoans
As some of you may know, I live in Bloomington, IN and attend Indiana University. Because it gladly accepts students not smart enough to attend school in Illinois, IU is like an idiot supercollider. This means I get to deal with students from Indiana, most of whom picked IU because the classrooms get great cell phone reception, as well as Chicagoans. Chicago girls are the worst. They are, without a doubt, the most abrasive, ugly, downright unintelligent group of harpies I've ever had the misfortune of sharing a campus with. Their voices, best described as “braying mule meets chain-smoking woman from Long Island”, could easily drown out a symphony of babies screaming over air raid sirens. If a girl on campus gets drunk, starts screaming, and flashes the two bluish-purple pieces of bologna under her “2 Hawt 4 U” panties to everyone at a party, you can rest assured she's not from Indiana. Indiana girls are far too fat to show their stuff without laying down and getting some friends to hold back her excess thigh meat.

As if this wasn't enough Rex Grossman himself attended high school here. Since IU students can't hold a conversation that doesn't involve T9Word, they tend to latch onto common topics like the weather, coursework, and genital inflammations stemming from inserting one's penis in something that could have been a slice of pizza or a vagina. As of Monday, Jan. 22, 2007, I have heard this conversation at least seven times:

As you can guess this is going to make watching the Super Bowl anywhere near Bloomington hell. Chicago sports fans and Indiana sports fans are like bleach and ammonia. Alone they're fairly noxious, but together they're deadly. I'm not one to encourage drunk driving or anything, but it sure would be a shame if everybody in Bloomington reading this repeatedly called all the taxi companies in town on Super Bowl Sunday so nobody could get a cab from the bars and had to drive home. Yep, that'd be a real tragedy. 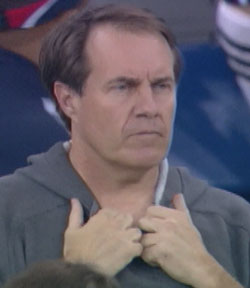 GOODBYE BILL I'm going to go ahead and get this out of the way to save sportscasters around the country a lot of time and effort:

We understand this is Peyton Manning's first Super Bowl despite the ridiculous numbers he's put up over the years. We understand he's excited to be there. We know he's not getting any younger and he really wants to win. Believe it or not, most professional athletes would like to win a championship. Now that we've covered these topics, maybe you can talk about something a little fresher and more original, like why pot should be legalized or your opinion of the war in Iraq.

The situation also gives IU's budding journalists a little room to shine. Our student paper's front page story about the Colts' win over the Pats, which – I kid you not – contained the phrase “The Colts are bitchin', and they're going to kill the Bears”, featured amazing insights like:

Call me elitist, but I'm going to avoid ESPN for the next two weeks, and when the Super Bowl comes on I'll turn my TV down and listen to a radio broadcast while I watch the game. It'll be hard, living without Woody “My Flippant Attitude Makes Up For A Lack Of Formal Education” Paige and the rest of the geniuses at ESPN for two weeks, but I'll make do. If I need a sports news fix I'll just check out the campus newspaper. It's fun, it's free, and the creative use of punctuation and grammar really appeals to my generation. That paper is bitchin'. 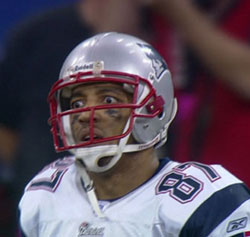 GOODBYE FREAKY EYED BUG MONSTER Looking back, the second paragraph of the first segment wasn't totally fair. Super Bowl commercials are tailored to people like the ones I described. If you don't know who “people like that” are, attend a class at your local community college and wait on some dipshit in an “ironic” eighties metal shirt to call something “totally random”. “Random” is the highest compliment a college student can pay to a work of humor. The word is often applied to people like Mitch Hedberg and Dane Cook. If you know someone who enjoys the show “Robot Chicken” and thinks it's the height of comedy to shout “penis” in a crowded mall, I guarantee you he loves Super Bowl commercials.

But hey, I'm a helpful guy. I know some companies are still scrambling to get their million-dollar laff-a-thons in on time, so I'd like to offer some assistance. If any of you folks at Burger King happen to be watching, please keep me in mind when you realize your advertising consultants are the most banal, unfunny people on the planet!

[SCENE: A living room. TOM and JEFF sit on the couch playing video games. In between them sits A MONKEY.]

Tom: Man, playing games is so bogus! And this monkey stinks! We need to get a life!

[HEAVY METAL MUSIC thunders and a LARGE MAN IN CHAIN MAIL drives into living room on motorcylce with “ROCK” painted on side. LARGE MAN pulls katana from his side holster, cuts television in half, and plays air guitar to the music. (LARGE MAN should have thick foreign accent).]

[LARGE MAN slaps product down on table and stomps on it with his leather boot. When he pulls his foot back the print on the item says “100% AWESOME MAN”. PEYTON MANNING enters room dressed as EIGHTIES ROCK STAR and plays air guitar with LARGE MAN.]

[Commercial ends with fading sequence to old pong-style game. PONG BALL should have company logo prominent on its front side. Every time the ball hits a paddle a GUITAR SOLO plays. Fade to black.]

As you corporate executives (who are undoubtedly reading this Internet sports humor column right this second) can see, I'm the man for your next advertising job. I just wrote in ten minutes what would have taken hundreds of man hours for your ad people to create. Imagine... envision what I could do with millions of dollars at my disposal. The prospects are scary, and not just because I'd fill a U-Haul with matches and fertilizer and drive into your front lobby!

My Thoughts On The Pacers/Warriors Trade

For this week's "-Isms" we talked to Mike Bibby of the Sacramento Kings. Love ya, Mike! Keep on point guardin' in the free world!