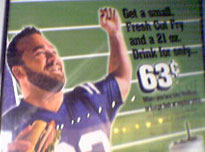 After his amazing rushing touchdown against the Patriots two weeks ago, expect Jeff Saturday to emerge from his local Penn Station full of vim and vigor. Saturday, who spent his first seven years in the league performing exciting tasks like “holding the ball” and “handing the ball to the quarterback when he asked for it”, managed to become an offensive powerhouse in a single game when he grabbed a fumble and pushed his 300-pound frame three entire feet into the Pats' end zone, proving once again the Colts have a million ways to make your defense look like a bitch.

Since Jeff has proven that he can rush every bit as well as a James or Tomlinson, expect him to shine as the Super Bowl's #1 receiving threat. Reggie Wayne tied up harassing girls at night clubs and referring to himself in the third person? Marvin Harrison too busy mumbling “not gay” through mouthfuls of ballboy cock? Ben Utecht stuck trying to figure out why the fuck he's playing any professional sport, let alone football, and why God hasn't stricken him dead out of pity (or anger, assuming he's a Colts fan)? Wing that eighty yard touchdown to Mr. Sandwich, Peyton. He's full of tender, juicy meats, delectable cheeses, and deadly scoring prowess.

Yeah, you heard me. Brian Urlacher is a pussy. A huge pussy. You shake Brian Urlacher's hand at an autograph session and your fingers are going to smell like a seventh grade post-prom for a month. I spend hours a day fantasizing about what I'd do if I met Brian Urlacher on the street. I'd compliment him, probably. Tell him I'm a big fan of his work. Then, as he was smiling and putting his hand in his pocket to grab a pen, I'd smack him across the face like the bitch he is. You know he'd probably run off and cry. Actually he'd probably run off, cry, and duck into a Bath and Body Works to find some moisturizing lotion to get the big red handprint off his face. Then he'd get up to the counter to pay for it, realize I stole his wallet, and start crying like a bitch all over again.

You know what? I bet Brian Urlacher likes aromatherapy, too. I bet he goes home after games and lights up a nice lavender chamomile candle. Then he puts on his favorite Dashboard Confessional CD and has a good cry because a guy on the other team told him his uniform didn't match his eyeshadow. You can mark my words when I say Brian Urlacher is the biggest pussy in the NFL, and I'll hold to that until he snaps my spine in half with his pinkie finger and I use the settlement money to buy platinum rims for my wheelchair.

Most Embarrassing Career-Ending Injury of the Game: Aaron Moorehead 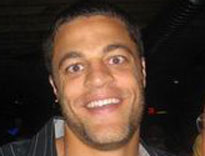 At last count Aaron Moorehead had suffered over 30 serious injuries, yet somehow he manages to come back week after week and fag up the Colts' offense up a little more. He is overweight. He is also incapable of catching a football. Last time I checked morbidly obese people with slabs of butter for hands weren't allowed to play wide receiver, but times have changed. In today's NFL all you have to do is look like the offspring of a duck and a post-hole digger and you have yourself a contract. Who cares if your skeletal system consists of aluminum foil and chewed gum and you're afraid to touch a leather football for much the same reason a cow won't eat a hamburger? Suit up, fat boy, it's time to lose a game.

Expect Aaron Moorehead to break both index fingers fastening his helmet before the game. Tony Dungy will still play him after Marvin Harrison goes the whole first half without making a single facial expression. Moorehead, sensing an opportunity to fix his reputation, will run out onto the field and trip over his own shadow (fun fact: Aaron Moorehead's shadow weighs more than the entire Bears franchise). In the ensuing fall he will blow out both his knees but still manage to crawl to an open position during a passing play. Peyton Manning will walk up and personally hand the ball to him. Moorehead will drop it. Referees will call a 30 minute delay when the receiver's sheer size destroys the suspension on three different golf carts. Finally, using a forklift and a semi trailer, medical officials will get him off the field. He will return to play in the fourth quarter.

Most Annoying Catchphrase of the Game: Laser Rocket Arm

Hey you. Yeah, you. The one with the wig and fake mustache on. Stop it. Stop it. You're not funny at all. You think it's awesome, referencing that stupid commercial like you're the second coming of Comedy Christ? You suck. You probably waited in line to get tickets for “Epic Movie”, didn't you? You got some Family Guy patches on your backpack? Do you spend most of your time talking about how “awesome” eighties metal is? Nobody likes you. Nobody will ever laugh at you unless your name and the phrase “fatal car wreck” are in the same sentence. You're a humor plagiarist. You're not creative enough to come up with something on your own so you snuggle up to that commercial's warm tit and suck the humor right the fuck out of it. Hopefully the next person to see you wearing that ridiculous getup pushes you down a flight of stairs, you irritating, humorless fag.

And you know what? That commercial was funny until people like you ran it into the ground. It was the one commercial people would stay in the room for. They watched it, chuckled, and moved onto something new. Not you. Most of your sentences start with the phrase “remember that episode of Ninja Turtles where...” You know what, asshole? You're not even old enough to remember the fucking Ninja Turtles. You go to a movie and laugh at the line they showed a million times on commercials just to let people know you, in fact, saw that commercial too. You're a mooch. A loser. The one thing that your parents regret is using a delivery ward instead of a white-hot coat hanger when you were born. You can take that commercial and cram it up your ass, assuming there's room with nostalgia's junk already crammed up in there.

Most Annoying Nickname of the Game: Sexy Rexy

I'm sure if you're reading this you're familiar with Kissing Suzy Kolber, an NFL blog I often describe as “like Pregame Wrapup's, but funny”. While I respect the hell out of the writers over there, I have to fault them for this article, which brought the phrase “Sexy Rexy” back into the limelight. Yeah, the article's hilarious. I still chuckle when I think of the phrase “Kevin Spacey gay”. But could you guys, like, make people stop repeating it? Because a lot of them think it's a compliment. The next time I see some bucktoothed, screech-voiced Chicago snatch tighten her Ugg boots so her crabs won't crawl down and tickle her feet, then shout “SEXY REXY” when she sees Rex Grossman on TV – well, the world will have one less Chicago girl.

Since you guys have shown you can create misunderstood catchphrases from great articles, why not pull a little prank? Maybe make it fashionable to shout “Hi, I'm a 20-year-old girl from Suburban Chicago and if I wasn't pretty I'd be completely worthless... oh, wait.” Something like “I'd have to suck a lot more cocks than I do if my dad wasn't rich” has a nice ring to it, too. I know this may sound harsh but you all have to understand the monster you've created. If you could just, like, get them to put down their Appletinis and pick up an icepick they subsequently thrust into their own lopsided chests, that'd be great. Thanks in advance, guys. 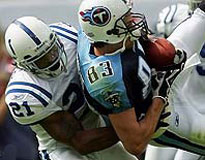 Assuming the Colts win the big game, it will be because of this guy. Sure, Peyton looks great out there with his perfect drives and spot-on passes, but this is Bob Sanders. He'll pull a Mario and jump on your head so hard you'll be able to scratch your ass and pick corn out of your teeth at the same time. His legs are made of springs and his shoulders are concrete slabs. You know that Gatorade commercial where Peyton “hatches” from a football? Bob Sanders did the same thing except he came out of a closed fist with brass knuckles on. And it's holding a white-hot piece of coal just to show how goddamn tough it is. But really the piece of coal is Bob Sanders. That might sound kind of philosophical or whatever but Bob Sanders says thinking is for sissies. Sartre only thought hell was other people because he didn't piss blood for a week after taking a Bob Sanders hit.

You know why the Colts defense picked up when Bob Sanders came back? Because they knew he'd single-handedly kick all their asses if they didn't shape up. It's like an abusive stepdad coming home from work. You thought you were in deep dutch when you broke the toaster? Bob Sanders made all those slackers on the defensive team punch themselves in the face so he wouldn't bruise his knuckles. Believe me when I say Bob Sanders is going to make Rex Grossman's spine look like Patricia Arquette's teeth.

We hate to abuse this feature two weeks in a row, but we were lucky enough to land a phone interview with Peyton Manning this week and it was too good an opportunity to pass up. Thanks for taking time to talk to us, Peyton!

Email Pantsfish if you want. He might even respond!