At the Movies with Madrox (Thanks, HatchetDown!) 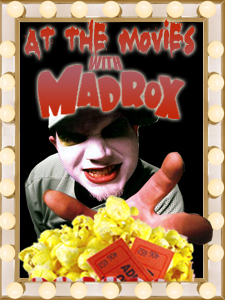 Nowadays, most artists tend to stick to one thing. Sure, you occasionally get a Jason Schwartzman (Phantom Planet/Wes Anderson's pool boy) or a Henry Rollins (Black Flag/Yelling real angry while people laugh), but today's world suffers from a paucity of true renaissance men. Twiztid's Madrox aims to change that. Having already owned the rap game with his buddy Monoxide, Madrox has turned his watchful eye to cinema.

Paranormal Activity: "I really didn't know what to expect. I seen the commercial and was super interested in how they were gonna market a home movie to the masses. Then I seen ol' girl get dragged out the bed by nothing and I peed a little in my underwear. I really did, which caused me to question my hostility to the first hour of build up in story line I had to sit through and endure just to get the piss scared out of me. Well there you have it. A little longy but when scarey, REALLY scarey! Soon to be released on DVD & BluRay with 7 different endings. Know about it."

Madrox's prose is gorgeously efficient; he embraces the old adage "brevity is the soul of wit." In the space that most critics would use simply to introduce the story line, Madrox presents a complete analysis of the film. Whether breaking down plot, keenly observing the cinematography or special effects, or discussing a film's place in the history of its genre (usually horror, Madrox's forte), he gives the reader just enough to draw them into the film, but not enough to walk away feeling as though they've already seen it. Take, for example, this bit from his review of the underappreciated Cabin Fever 2:

"Things that can't be erased from the mind - pissing blood in the punch bowl, blow job from the girl with braces and that nasty cold soar [sic] on her lip, ripping off fingernails, and the aftermath from that infected blow job (aka the custard cock) - I told you in the beginning it was wrong."

The simplicity of his descriptions, their vagueness, contrasts the very real violence seen on-screen - the viewer is vaguely aware of the horrors yet to come, but the experience of seeing them, the visceral flair, the true essence of film-going, is left to the film itself.

Regarding Laid to Rest: "I might have been a little high, but I swore I seen a scene with a pieced together corpse getting straight humped."

Madrox may not be as famous as Roger Ebert, or even Roeper, but his contribution to the realm of cinematic commentary is undeniable. His delight in the joviality of film is rivaled only by Rolling Stone's excitable Peter Travers. My only regret is that there are so few movies reviewed here. Perhaps Madrox should renegotiate his contract: He's either not being paid enough to visit movie theaters frequently (and with the cost of tickets today, who is!), or he's simply touring too much. Either way, I can only hope Madrox re-enters the world of film criticism soon. I'm eager to read his opinions regarding the new film Devil. I expect he will find it badass.