Video Game Article will be delving deep to find out how some games would have been different if they had been developed by today's most prominent and/or outspoken game makers. Our first installment of this series features Guitar Hero as envisioned by Lorne Lanning (Oddworld: Munch's Oddyssey, Oddworld: Abe's Exoddus, Oddworld: Stranger's Wrath). 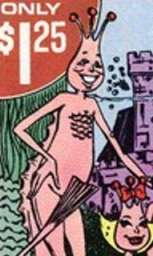 Those damn guitarists get all the deformed chicks."Okay, we have this basic premise of playing guitar, but there's no real sense of personality. The game needs a central character, someone quirky but really easy to come up with. You remember Sea Monkeys, how they had those little cartoon depictions of the monkeys on the instruction book? We'd model one of those and change its skin tone to a random color, then make the eyes bigger and add some funny clothes. Name him something like... I dunno, Squonk and give him a warbly voice. Voila, instant art.

So now that the player has a visual representation of himself, how does he feel emotionally connected to it? Well everyone knows that companies hate animals and the environment, so we make the goal of the game to rock so hard that the crowd likes you more than they like the evil company. Add in an opening cinematic where the company's smokestacks make birds (with rabbit ears and a second pair of wings instead of back legs or something) cough and then the company captures the birds to test their cough medicine on them. It would drive the point home and hopefully indoctrinate a lot of kids into waking up and realizing that this stuff is actually happening.

Squonk's guitar would be made of wood and instead of tuning keys there would be spiders, each one with a strand of silk coming out of its silk ass for a guitar string. That's not quirky enough, though. Maybe the spiders would have antennae and really large noses. Have you ever seen a spider like that? No! You haven't! That's exactly why it's genius.

One concept that never gets old is slapstick with small creatures. Instead of effects pedals, we could have things that look like hamsters but with lizard skin, and when you want to change your guitar's sound you stomp on them. They'd probably fart out a cloud of purple vapor and have their eyes pop outward too, just to make sure everyone knows it's funny.

I would also fire my entire staff the night before the game was sent off for duplication."

Bad Day L.A.
I will finally admit that, yes, I only wrote this because I am a bitter person who is jealous of the creative accomplishments of others. 0/10

Barrow Hill
A horror adventure that's almost as scary as the Scary Movie series is funny, and almost as fun to play as it is scary. 3/10

Coffee Tycoon
You'll need to buy more coffee to keep yourself awake than you will ever sell in the game. 2/10

Company Of Heroes
Relic's fantastic RTS illustrates how WWII's outcome was inevitable once the United States deployed their legions of floating disembodied commanders. 9/10

Lego Star Wars II: The Original Trilogy
By far a much more lighthearted and enjoyable experience than Duplo Event Horizon. 8/10

Just Cause
The most realistic "jump your car off a cliff, open your parachute, fire a grappling hook into a helicopter and hijack it, bring the helicopter up as high as it will go, jump out and freefall at terminal velocity, then grab onto the tail of a jet plane with one hand" simulator you'll ever play. 7/10

Bomberman: Act Zero
At the exact same moment, production is stopped on Bubble Bobble: Dark Hallways, A Boy And His Blob: Mech Suits And Metal, and Yoshi's Pierced Tongue Island. 1/10

Test Drive Unlimited
If "unlimited" means "the players you run into are completely random and it's almost impossible to meet up with a friend at a predetermined spot", then this is pretty fucking unlimited! 7/10

Enchanted Arms
So generic that it could be packaged in a plain brown case, so Japanese that it would sell well anyway. 6/10

Open Season
I can only recommend this game if you're bored because your friends went Over The Hedge to hang out with Chicken Little in his Barnyard or if you're trapped in Madagascar during a new Ice Age and somehow found an outlet in The Wild to plug your console into. 2/10

Samurai Warriors 2
Wraps up some major plot points left over from the first game, such as "Did I hack everyone in the world to death yet, or are some people still crawling around out there?" 6/10

NHL 07
Using the thumbstick to make it feel like you're actually controlling a hockey stick is a tremendous improvement, but this series won't be perfect until you can use the shoulder buttons to shrug when another player asks when hockey will be broadcast on a tv channel people actually watch. 9/10

Disgaea 2: Cursed Memories
Powerlevelling against monsters in an alternate plane of reality and attending political meetings in your downtime: it's not just for Barack Obama anymore! 8/10

Xenosaga Episode III: Also Sprach Zarathustra
And so the "Not as good as Xenogears" series draws to an end before its planned sixth installment, leaving us all to wish the cinematics had been greater in length and number so we could have gotten the full story. 8/10

Okami
It's like playing a painting come to life, only unlike real paintings that come to life you can turn it off and it won't teabag you when you fall asleep. 9/10

King Of Fighters 2006
Things would be a lot easier if you fighters could just pick a king and stick with him already. 7/10

Spyhunter: Nowhere To Run
Nowhere to run but to the store for your refund, or to a mirror to try and watch your eyes roll after that horrible joke. 3/10

Ultimate Ghosts N' Goblins
Being a knight in boxer shorts that fights ghosts sounds like a dream job at first, but no one ever thinks about the ghost-induced boners until it's too late. 8/10

Loco Roco
Do we really want to send our kids the message that when life gets tough, we split ourselves into smaller pieces? 8/10

Rengoku II: The Stairway To H.E.A.V.E.N.
Although this is a terrible game, I'm going to suggest you buy it to support the publishing of games with wonderfully bad titles. 5/10

Dragon Quest Heroes: Rocket Slime
If you go up to a girl and ask "Do you want to see my rocket slime?" and she says yes then you're in, but if she gets weirded out you can say "Relax, I was talking about this game on my DS!" and you'll share a laugh, at which point her guard will be down so you can touch her hair and run away. 9/10

Cooking Mama
If I knew cooking was this much fun, I wouldn't have spent my life savings on a subscription to the Three Lunchables A Day For The Rest Of Your Life Club. 7/10

Star Fox Command
I don't think scratching behind Fox's left and right ears to turn is the best use of the touchscreen, and you don't even want to know what goes into doing a barrel roll. 8/10

Mario Hoops 3 On 3
A chilling meditation on the continued dominance of basketball by short, overweight Italian players. 7/10