Wednesday, Jan 04, 2006 by Dr. David Thorpe (@Arr)
If you’re in a band and you see your CD in the one-dollar bargain bin, it is the ultimate symbol of failure. Basically, it means that your CD is not only unsold but fundamentally unsellable, and the store must resort to selling it drastically below cost just to recoup some of the money they spent on it. These bands are so unsuccessful that they’re costing record stores money just by releasing CDs. They’re a drain on the industry, and they ought to be ashamed of themselves.

This is the continuation of my last article, in which I picked up ten CDs for a dollar each from the bargain bin of a record store. Behold, the culmination of my foolish waste of money! 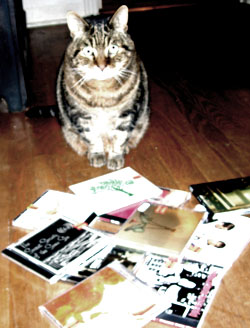 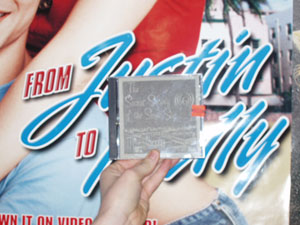 How's this for experimental musical juxtapositions?Cover Impressions: In the first part of the Bargain Bin Roundup, I reviewed a record by a duo called Ringside. As I looked at the cover of Ringside’s album, the fact that it was a two-man band didn’t make much of an impression on me; plenty of groups have only two core members, so it’s not a particularly shocking sight to see two dudes on an album cover (unless one is being shocked by Art Garfunkel’s afro, the power of which is undiminished by time). However, seeing the pair of pencil-mustached villains on the back of The Secret Society of the Sonic 6’s album gave me a start: they look like the weird kind of duo, the Suicide or Soft Cell type, the sort with that inscrutable campy-seriousness that leads to miserable tracks like “Frankie Teardrop” and “Sex Dwarf” that fifteen-year-old “aesthete” semi-goths jerk off all over just to prove a point. Get what I’m saying?

Looks like my Frankie Teardrop reference hit the mark, because the first vocal utterance to be heard on this record is a scream. It’s not really the kind of blood-curdling “I just murdered my child” scream that you might hear in a Suicide track, though, it’s more of an “I accidentally raked the iron across my nipple” shriek. And we all know what that sounds like.

So, anyway, I was right. They’re that kind of duo. I’m glad I took the time to prepare my emotions for a dire lack of tunes disguised with half-cocked attempts at urban sleaziness, because that’s exactly what they delivered. Records like this live or die by the verisimilitude of their sleaze, and this one fails to illuminate the underbelly in a captivating manner. On the sleaze-scale, “Nite City,” falls short of gritty “Dirty Harry” sleaziness and lands somewhere between Cinemax and peeing in an alley.

While the record is clearly an attempt at experimental electronic rock, these two bozos have failed to realize that chintzy, minimalist drum-machine handclaps and vintage synth squalor haven’t been cutting-edge for twenty years. Sorry, guys, but that shit is mainstream now. Houston rap production is more avant-garde than this. Maybe if you recruit Paul Wall and form a trio you can turn some heads.

Worth the Dollar? If you want to feel grimy and urban, spend the dollar on crystal meth. 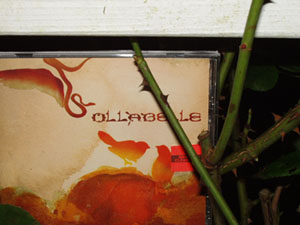 Ollabelle? More like horrabelle!Cover Impressions: Uh oh. I see a lot of traditional gospel tracks in the tracklist. Let me just open up the liner notes and see if the band is a bunch of square thirty-something white people… oh, hey, what do you know, it’s a bunch of square thirty-something white people singing negro spirituals! This ought to be about the most toe-tappingly groovy CD I’ve heard all week!

As if to quickly confirm my worst fears, the first track is a bunch of idiotic white cultural tourists minstrel-showing their way through an Alan Lomax chain-gang song. Fuck this CD. This pile of whitebread crap is so artless that after listening to it I’m going to have to rent out a “space” and put on a “one-man performance happening” in which I set myself on fire and throw rotten beef patties at the audience just to regain some semblance of my post-modernity.

Worth the Dollar? Okay, pretend I’m saying this in a “retard” voice: wuuuth tuhh duhhluuh!?

Giant Value – In the Trees 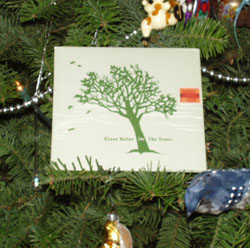 Get it? I put it IN A TREE!Cover Impressions: Looks very graphic-designy and adorably twee. I’ll bet you this band contains girls. I’m prepared to mellow out.

Basically, it’s trash. It’s another boring indie record for San Francisco hipsters (the least hip hipsters in the world) to nod along to and pretend to dig because they’re desperate for even one of their shitty bands to break into the public consciousness. You could count the remotely relevant San Francisco indie bands on half a hand: they had the mopey Red House Painters, but that was ages ago and nobody cares anymore, and the singer’s current project is an album of Modest Mouse covers. Yuck. They had the Brian Jonestown Massacre, a band which got famous for never getting famous. They had Beulah, the crown jewel of the Elephant 6 label, the sonic equivalent of warm milk. Consequently, the press in San Francisco fawned over this record like it was a work of breathtaking originality, whereas it is actually a barely-competent piece of lo-fi “indie pop” (slang for “insufferable shit”).

You want to know the worst thing? The record is “quirky,” which means it thinks it’s clever but it’s not. The title track is the closest thing to a non-stinker here, making this record 1/6th passable. Not exactly a “Giant Value,” but at least they’re not Ollabelle.

Worth the Dollar? You might like it if you’re into indie-pop, since indie-pop fans basically don’t give a damn what they listen to, as long as it’s not too interesting and nobody else has heard of it. 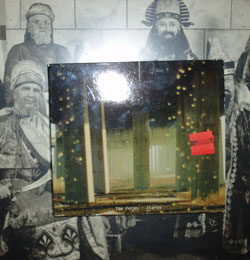 What? A decent CD?Cover Impressions: This thing has “post-rock” written all over it. No tracklist, no credits, no nothin’. I looked at the liners and saw that it was produced by Steve Albini, and I could practically hear the whole album in my head before I put it on.

Hey, color me impressed. What we have here is an interesting and competently-played album, lacking the pretension and boooo-ooo-oo-oooringness of 99% of “post-rock.” It’s got actual melodies, and weirdness is never employed for the sake of weirdness alone. Rare qualities among indie bands that take themselves too seriously, to be sure.

Dumb fucking luck, though, it’s only like twenty minutes long, despite being billed as an LP. Finally, I get a decent record, and it winds up being a rip-off anyway because it’s barely long enough to count as a strange interlude.

Worth the Dollar? If you’re looking for quality over quantity, this seems to be the one to spend a buck on. 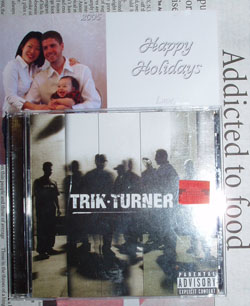 Trik Turner amid domestic squalor.Please, Lord, strike me down before I have to listen to this shit. Judging by the cover, and I’ve been pretty successful at that so far, this is the worst pile of shit in the long and storied history of piles of shit. Check out their name! Not only is it a HARDCORE rap-rock misspelling of the highest order, but it also implies that they are a bunch of male prostitutes who fiddle with penises for money! Come on, idiots, at least think of something badass like “Limp Bizkit.” New rule: rap-rock bands don’t get to come up with their own names anymore.

Any band stupid enough to rip off shit like Crazy Town, Limp Bizkit and Staind deserves to be literally destroyed and salvaged. Have you ever seen those lists of all the elements in the human body and how much they would be worth if you could extract and sell them? The gist of them is that we’re all made of mostly oxygen, hydrogen and carbon with small amounts of stuff like potassium and phosphorus thrown in for flavor, and altogether our component elements are worth a little less than a dollar, assuming you could find a buyer for tiny amounts of easily obtainable elements.

Judging by the cover photo, there are about six of these guys, so let’s assume they’re worth about five bucks total after we melt them down. The first two dollars go to me: one dollar for the cost of the CD, another dollar of punitive damages because I listened to like fifteen minutes of it. The next dollar goes to their label, which is a fair settlement of their worth and a decent buyout of their career prospects. The fourth dollar buys another copy of this album and ceremonially destroys it, and the fifth dollar also goes to me. I was going to divide it among everyone else who bought this record, but that’s hardly fair. They presumably bought the record because they wanted the record, which makes them huge morons who don’t deserve a single fucking penny out of the Trik Turner Component Element Fund Foundation. I bought the album for the purposes of science, and therefore I am more worthy.

Worth the Dollar? I wonder how much money you could get from salvaging the elements of a CD…

Well, I’m done with that pointless exercise! I hope I never get any brilliant ideas like that again. Speaking of brilliant ideas, feel free to contact me at davidthorpe@somethingawful.com if you can think of any ways to trick Trik Turner into a big centrifuge or something, so we can get rolling on this scrap operation.