Tuesday, Dec 06, 2005 by Dr. David Thorpe (@Arr)
The Field Guide to North American Hipsters seemed to strike a chord with many readers, and it’s easy to see why. The creatures presented in volume one were immediately familiar to anyone who’s ever gone to a bar to see a local band, anyone who’s ever wandered into an independent record store, and anyone who’s ever dated some skinny sad-sack with dyed black hair and a white belt. Before I embark on volume two of this great venture, I thought I’d air some of the great e-mails I got from fellow scientists regarding the first volume.

Interspersed throughout this article will be reader-submitted photos of misguided hipster idiots. Most of these photos have absolutely no relationship to the letters printed, they’re just added for laughs and color. 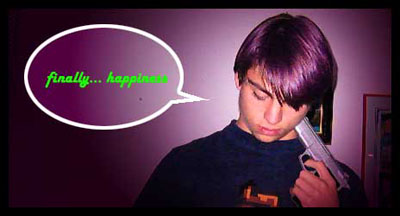 First up, a couple of letters from annoyed girlfriends of hipsters: 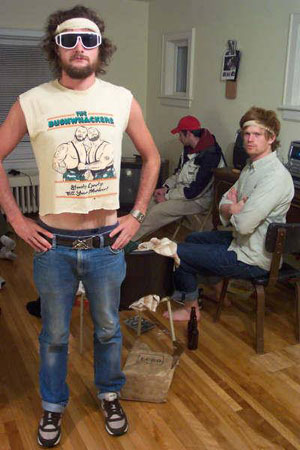 Yeah, you're ironic, WE FUCKING GET IT.Hi. After reading your article, I can now say with 100% certainty that I am the girlfriend of an "indie fan". I mean, I guess I've always known, but your descriptions were so dead-on that it finally hit home with me. I also feel compelled to share with you some... ah... warning signs.

--Last September, my boyfriend was THE BIGGEST Death Cab for Cutie fan ever. I told him I had never even heard of them and he said, "exactly! That's because you have terrible taste in music!" A few months later, one of their songs was featured on the soundtrack for some movie, probably starring Ashton Kutcher, because that bumblefuck is in everything. Anyway, needless to say, my boyfriend says that Death Cab sucks, has always sucked, has sold out, etc, and that Ben Gibbard has broken his heart.

--I'll come by to visit my boyfriend and he'll be listening to music. I'll ask "what are you listening to?" He'll respond, "only the most awesome band ever! Here! Listen to it!" He gives me the headphones, I'll listen for awhile, remove them, and say "it's ok, it's not something I'd listen to." He says, "you hate it, don't you. God, you have awful taste. Why do you hate this song?" Then, he'll unplug the headphones so the music will start playing out loud and he'll put his hands by his face and sort of bob along to the music for a few seconds, smiling. Then, "you hate it, don't you. Why do you hate my music? Why do you hate me?" So, I roll my eyes. A week or two later, much to my chagrin, I'll have the song stuck in my head. I'll go to his room and ask him to play the song, knowing that that's the only way it'll leave me alone. He says "what are you talking about? That band sucks. I don't have their music. EVERYONE likes them now." (Wash, rinse, repeat.)

--He'll burn me a CD, and then, a few hours later, ask me if I don't just absolutely LOVE the band. (Of course, I probably won't have listened to it yet.) Then he gets all hurt. The next day, if I don't rave about what awesome taste in music he has, he goes around and sulks until the evening, when he's found another band to listen to.

--Also, if I really like a band (even if no one has ever heard of them, example: The Apes), and I KNOW that if HE had been the one to stumble across their music first, he would LOVE it, I'll tell him to listen to it. He either 1) never listens to it, or 2) listens to half of the first song and say "ehhh, I'd rather listen to _____," and turn it off.

He sounds like a cross between the indie fan and the pop nerd to me. The elitism and fear of popularity of the indie fan is combined with the unimpeachable taste and condescension of the pop nerd. This is perhaps the most obnoxious of all music fans, and I apologize for the fact that you’re stuck with one. I wish you the best of luck in your righteous struggle against his stereo-pression.

Next up, we have another (not entirely) bitter girlfriend. This time, it is the prey of a “real punk” such as was identified in the last column:

Hey, your thing about identifying punks had me laughing my guts out. Attached pic is what's left of my (punk) ex at age 46. Note the houseplants, animals cuddling, nose rings and bandana. [note: I haven’t included the photo, just in case its presence might offend someone.]

Old enough; had me for 8 years (I'm 25, (we met when I was 17). My use to him seems to have expired when I refused to be traded in for two girls half my age); reminisces about ridiculous escapades with famous bands like they are his best friends (they are, they come to visit without warning); truly believes beer is a food group, and that copious quantities of it are required for survival; routinely dates barely-legal hot young wannabes (case in point); has no concept of paying rent or money management; eats stuff I won't smell; doesn't seem to mind living with many and varied insect infestations; regularly brings home stray junkies; can sleep anywhere and through the loudest music in the world; basically meets all of your criteria except not knowing the word work.

Oh, I forgot, he also wears clothes until they disintegrate and fall off his body. He does seem to shower rather more than normal people (usually sans clothes), though shampoo and body wash are foreign to him, as is a toothbrush most of the time. Plain white soap or any kind of liquid detergent seem to make him happy.

So, I guess I just wanted to let you know how much I enjoyed your bit and that you are right that the real punks are the ones who get the younger women to come home with them. That’s why I lasted so long with him, he is a damn good lover and will probably talk his way out of death when he gets older and grumpier and it comes for him. he is just so much fun that I couldn't give him up for a long time.

See, that’s the power of real punks: they can lure in impressionable young women and keep a lasting grasp on them even despite deficiencies in hygiene, manners, and basic human functionality. For another perspective on the real punk, consider this message from a man named Nicolas:

I wanted to say that I appreciate the whole 'real punk/fake punk' thing, as my mom was a punk in the late 70's. She often, and at great length, laments the rich jerks that now call themselves 'punk', what has become of the once great (Johnny Rotten), and how great Richard Hell and the Voidoids was, after which she usually puts 'The Filth and the Fury' into the VCR. Of course, this is sort of ironic, as she stopped participating in the 'punk lifestyle' in any meaningful way when she became a Christian in 1997 (the vague sense of outrage remains, however).

The most hit-the-nail-on-the-head thing I have read in a LONG time. I may print it out and give it to all those 20-something-can't-be-bothered-to bathe-stinkys that frequent the club I work at. By the way, I am 40. In 1982 I pierced my own cheeks with 7 safety pins while on lots of acid then went to see The Plasmatics where I puked on the security guy who was throwing me out. I slept in an alley. Was I a REAL punk? Fuck, I don't know, just more of one than the posers I deal with weekly I guess.

I even dress well.

Hell maybe I should pierce my nose to piss off my corporate boss. Nah, too "Hip"...

I like this guy because he has no illusions about his punkness. Sure, he mutilated his face and got thrown out of a Plasmatics concert (what the fuck do you have to do?), but he doesn’t gloat like a jerk about much of a punk he is. He bathes, he dresses nicely, he rolls his eyes at the “punk” kids, and he gets on with his life. I’m going to go ahead and call this guy a punk, he’s earned it.