Tuesday, Jun 21, 2005 by Dr. David Thorpe (@Arr)
People have been asking me to make fun of They Might Be Giants for quite a while. I've always contended that They Might Be Giants do a perfectly good job of making fun of themselves by being goofy nerds with waning careers and annoying fans, so I've put off writing this for a long time. Plus, they're completely irrelevant, so I had to wait for a slow music-news week.

Regular nerds are okay. They’re willing to stay up until six in the morning watching horror movies and drinking mountain dew, and they eventually grow up and get rich and let you sleep on their couch as long as you want. Sure, they may be a little too fond of D&D&D (Dungeons and Dragons and Dio), but that doesn’t mean they aren’t cool in their own way. But some nerds are more than just nerds. Some of them are real creeps. I’m sure you knew a few in high school: the kids who liked trains and transistor radios and freaked out if anyone mentioned sex and then had to change schools because they got caught masturbating in class.

The worst of the nerds tended to pair off. There’d always be one who was a squirrelly, introverted spastic, and one who was a tiny bit better-looking and had maybe kissed a girl but was still a complete dweeb. Of course, the squirrelly one secretly thinks that his dapper friend is the coolest dude in the universe and is eaten up by jealousy, and the dapper one secretly thinks that the squirrelly one is cramping his style. This dynamic generally manifests itself as loud arguments over Star Trek minutiae. These duos can be found at just about any school in the nation, drawn together by the fact that nobody else can stand them. 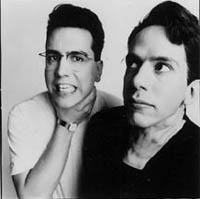 Instinctive self-bullying tactics.Imagine two of these kids forming a band. Surely they would have shrill, irritating voices, “hilariously weird” lyrics, and zany music videos. Their music would be just like them: sexless, and jittery; hiding behind wackiness and intellectual airs to conceal torment and misery; pathetic and annoying. Their fan base would consist of all the outcasts nerdy enough to tolerate them, mirroring the sad rejects-sticking-together dynamic of their friendship.

I guess I don’t have to be coy about naming the band to which I refer, since you already read the title of this article (unless you navigate the internet by closing your eyes and clicking on stuff). I’m talking about The Might Be Giants, the novelty-indie-pop group with a massive cult following of nerds, children, and poor souls who don’t know any better. They started out as a typical nerd-duo like the one I described: John Linnell the skinny introverted spaz and John Flansburgh the slightly-more-hip one. It’s easy to picture them in school pretending to be robots, asking to smell girls’ hair, and refusing to change in front of the other boys in the locker room. When they got home, I imagine that they’d put ice packs over their black eyes and fuck around with tape recorders all night. 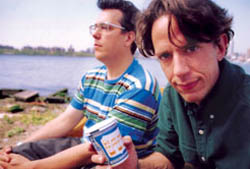 It looks like a screenshot from a documentary about autism.As young adults, Linnell and Flansburgh managed to reinvent themselves as artsy New York hipsters and form a band. That may sound far-fetched, but keep in mind that just about every influential New York hipster (Andy Warhol, Lou Reed, Michael Alig) started out as a creepy little weirdo. They released their eponymous debut album in 1986; the album was a template for their future releases, since it established their chirpy musical direction and divided its tracks between Linnell’s wearying wackiness and Flansburgh’s infuriating gimmick-songs. I swear, nobody else in the world of music can beat you over the head with a concept like Flansburgh, whose novelty songs are so tedious that he makes Weird Al Yankovic seem like master of subtlety. Songs like “Number Three” and “Alienation’s For the Rich” bear the indelible impression of Flansburgh thinking up some turn of phrase, mistaking it for witty, and deciding to write a hilarious ditty around it. It almost makes you feel sorry for Linnell, who has to agree to put them on the album (and maybe even pretend to like them) so Flansburgh will keep playing guitar for him, but then another Linnell song comes along and you realize that those are even more terrible in their own way.

If anthropologists of the future ever sit down to categorize the sundry varieties of nerd and require as precise a definition for “spaz” as possible, they need only listen to the drum machine/guitar intro to “Don’t Let’s Start.” If you close your eyes and listen closely, a crystal-clear mental image of a skinny kid getting his head dipped in a flushing toilet materializes in the mind’s eye and repeats for the duration of the song. Maybe this is the difference between how a They Might Be Giants fan relates to the song and how a non-fan does: fans swell with pride and imagine their own heads being dunked, and the non-fans become enraged and picture themselves administering the swirlies. 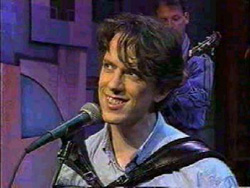 John Linnell: The Creepy One.Their second album, Lincoln, presented more of the same creepy Linnell nerd-insanity and irritating Flansburgh novelty crap (which hits its abysmal low-point with “Santa’s Beard,” which is both a big-concept novelty song and a shitty holiday song). The album’s peak of dorkiness is “They’ll Need a Crane,” which is such a clumsy and hackneyed take on relationships that one can only imagine that it’s nothing more than Linnell’s baseless speculations on what being with a girl would be like. While Lincoln did little more than tread water, their third record was something of an overhaul. It was their first record released on a major label (and, amazingly, not their last), so they had to step up their game a little bit. If anyone dares accuse They Might Be Giants of being frivolous and having nothing to say, I challenge them to listen to “Your Racist Friend,” TMBG’s bold stab at social commentary. With this song, They Might Be Giants have clumsily established themselves as men of principles, men who are sort of generally and non-specifically opposed to racism, and to talking to racists at dinner parties. Bravo, John and John, your shaky commitment to wishy-washy liberalism will surely give you something to talk about next time the NPR-patrol comes around to suck your dicks (did I mention that all NPR personalities inexplicably love They Might Be Giants? It must have something to do with being in the AV club in high school). The album also boasted the minor hit “Birdhouse in your Soul,” which was sung from the perspective of a night light, allaying the fears of all their bedwetting-pussy fans.

While the less-successful follow-up Apollo 18 mostly treaded water, it did feature quite a heavy-handed gimmick. In a last-ditch effort to make the record memorable, The Johns included twenty very brief tracks labeled as “Fingertips,” which were designed to be scattered around when the CD was put on shuffle. Both the concept and the content are testaments to the fact that no idea is too stupid for They Might Be Giants. Fingertips provided a perfect clearinghouse for worthless song-fragments which weren’t good enough to use but somehow couldn’t be left behind. Maybe one of the symptoms of whatever mental disease John Linnell has is ceaselessly hoarding garbage, even musical garbage; their long-standing Dial-a-Song service is evidence of this (fans can call an answering machine maintained by They Might Be Giants and hear miscellaneous demos, works in progress, and pure crap).

Retrospectively, Apollo 18 was basically the band’s last gasp; 1996’s John Henry added a live band, which somehow managed to make them sound even more amateur than before. After that, we were treated to several increasingly miserable albums. Perhaps the creepy nerds we were used to simply grew up and stopped being such geeks; the only thing worse than novelty geek-rock is novelty geek-rock that sounds forced and phony. Even despite a run of four poorly-received albums in a row (five if you count a 1999 internet-only release which featured plenty of re-worked versions of Dial-a-Song detritus), the Johns had some steam left in their career at the turn of the millennium. Well, I’m not sure if “steam” is the right word, unless you define steam as “the capacity to irritate.”

They Might Be Giants have always had an appeal to children similar to that of a van full of puppies, so it was only natural that they would break their fall by grabbing onto the lowest rung of the rickety rope ladder hanging from the helicopter of fame: children’s records. In 2002, they released No!, a collection of insidious mind-programming tools designed to turn your children into friendless nebbishes; they followed it up this year with “Here Come the ABCs,” which I will admit to not having heard, even though it takes some of the credibility out of my assessment that it sucks (then again, at some point we have to just learn from experience and develop a natural prejudice; if someone said to me, “hey Dave, the Nazis are back!” I’d say “hey, fuck those guys” without waiting around to see if they were different this time). 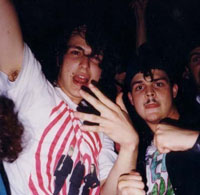 These dudes are They Might Be Giants fans, meaning they're too lame to listen to Morrissey.From their beginnings as pitiful young nerds to their heyday as well-regarded indie rock nerds to their continuing dotage as middle-aged men pretending to be pitiful young nerds, They Might Be Giants have cut a bloody swath of ugly novelty songs and annoying geek-pop across the American musical landscape, raising an army of impressionable and friendless teenage geeks to buy their zany records and attend their zany concerts. Even if their power over nerd-America has diminished, their legacy of minor college radio hits and their cult of socially inept gee-I’m-wacky dipshits remain. And what’s worse, now we have to keep them away from our children, too. Remember: if your child asks for a They Might Be Giants album, slap him hard in the face and buy him a basketball and a copy of Penthouse and Replacements album instead.

If you have any questions, comments, or, God forbid, complaints, you can send them to davidthorpe@somethingawful.com. I’d like to thank and acknowledge the Something Awful Forum Goons and various people who e-mailed me for constantly badgering me to write about They Might Be Giants, because lord knows they deserved it. Also, if you're inclined to do so, check out today's Daily Dirt for some worthless insight into nothing in particular.