Monday, Jul 15, 2002 by Rich "Lowtax" Kyanka (@TwitterHasBannedAllMyAccountsEver)
Know of an awful site? Send it to us and become a hero!

Warcraft: Chronicles of Chaos, submitted by Me!!!. There's nothing that I enjoy more than videogame fan fiction. Let's face it; anybody who's willing to spend days writing stories about characters from their favorite games deserves our attention and eternal devotion. Fan fiction is probably the best thing to hit the Internet since the inflatable balloon furry fetish. Since today's update deals with the wide and wacky world of Warcraft, I think it's only appropriate that we observe some of the finest fan fiction that the Warcraft community has to offer, namely "none." However, there are such gems as "Warcraft Meets Half-Life," an epic tale detailing the saga of Dr. Gordon Freeman versus the Orcs. What a fabulous idea! 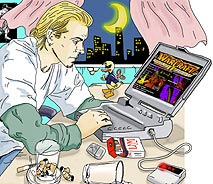 Then suddenly something jumped out of the bushes. Something big. It landed behind Ian.

"What the fu...!" He didn't finish his sentence as the big thing drew an axe and cut off his arm. Ian screamed in agony and fell to the ground. His hand was clutching to what was left of his left arm.

"Shit!" Jean drew her gun as well. Both her and Gordon started shooting.

Apparently the big thing was surprised by the gunfire and screamed something in a strange language. He had already got two bullets both of his legs and three in his arms but his was still standing. The thing raised its axe again.

"RUN!" Jean screamed. They did so.