Welcome to the Hawk-Cave, submitted by Wham. A lot can be said for those who dress up in spandex costumes, but most of it is pretty mean. Hell, all of it is. The only man who can really get away with it is Adam West, and that's because he's a man's man (not a gay man's man, but a straight man's man). As I said, nothing good can be said for people who dress up in spandex. Here's a quick refresher as to why: 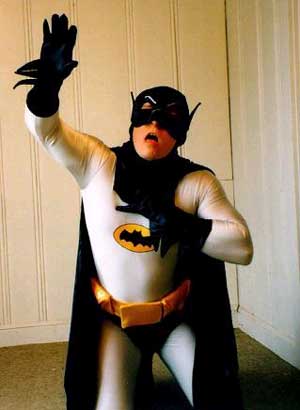 Here we see Batman asphyxiating himself for improved masturbatory pleasure.

Everybody likes to dress up in costume, especially if there's lots of spandex and superheroes involved! This is the place to show the world your new outfit!

Yes, show the world how much of a fruit ball you are! All your favorite characters are here, although they've put on a few pounds and their muscles have atrophied, but they're here. Also their costumes have been stretched to their limits and they haven't gotten much sunlight in the past few years. But they're here. Oh joy.

The last thing I want is for an overweight Spider-Man to swing down and cradle me in his giant mounds of spandex-covered fat. As attractive as it is to imagine myself nestled snugly between the folds of fat, it's a fantasy best left in my mind. Now go away, you're too fat to be a superhero!

For further punishment, you can brush up on your knowledge of the Super Jayhawk, a horrible looking mascot championing the cause of retardation. Yes, this will be on the test.