The Ministry Of Darkness

Monday, Jul 22, 2002 by Rich "Lowtax" Kyanka (@TwitterHasBannedAllMyAccountsEver)
Know of an awful site? Send it to us and become a hero!

The Ministry Of Darkness, submitted by Bob. 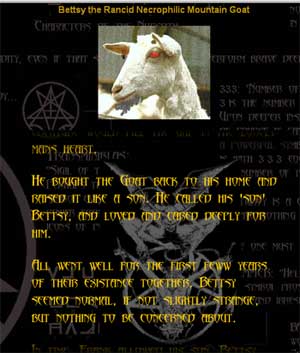 Every time I think humanity has sunk to levels below the decaying corpses from the Titanic, I am repeatedly surprised by the sheer magnitude, ferocity, and intensity in which our own stupidity is able to reach up, throttle me by the throat, and remind me that our race lives in a gigantic darkened well where the bottom keeps dropping lower by the nanosecond. You see I have this problem where I underestimate the sheer idiocy of people, a mistake which any rational person would believe I shouldn't suffer from after running this site for nearly three years. I guess that's another example of human stupidity in motion. I suppose I just have a bad habit of giving individuals on the Internet too much credit and overestimating their intelligence. For example, the recent Awful Link of the Day, Bobby Crosby, registered a SA Forums Account and posted what had to be the largest series of moronic messages I've ever read, each one lacking any form of common sense or intelligence whatsoever. The complete over-the-top idiocy displayed in these posts led me to believe he was actually a gimmick poster (a person pretending to be Bobby Crosby just to give him a bad name or make him look stupid), which made me ban him... but later I found out it was actually him the entire time.

Do you know how this makes me feel? I'm not embarrassed or ashamed I banned this person because I mistakenly thought he was a gimmick account, but I'm embarrassed and ashamed he's real and a member of the human race. Our human race. Do people lose common sense before they log on to the Internet or do they lose common sense after? I honestly have no idea but I do know one thing: I need to stop giving these dumbasses on the Internet the benefit of the doubt and instead assume that they really are what they seem: hopeless retards. Now keep in mind that I'm not adopting a holier-than-thou stance. I realize that I'm just another moron floating in the endless sea of Internet assholes. However, I don't have any problem admitting it: I'm a jerk who runs a website making fun of other jerks. It's one thing to know you're stupid but it's an entirely different thing to go through your life being too stupid to realize this.

Case in point: The Ministry of Darkness. At first glance I assumed this website was so horrible that it had to be a joke or parody of the inane Internet goth scene, where pasty-white suburban Caucasian children dress up in black and whine about how mom won't let them go to 7-11 and buy Charleston Chew candy bars. I mean, this site has it all: unreadable text, horrible animated gifs that are far too large in filesize, pointless Flash, and text so clichéd you'll think you're reading a terrible Saturday Night Live skit. Once again I hope and pray this site is fake, but I think we all know the truth: the Internet makes you stupid. 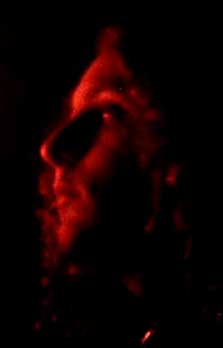 I am contemplating beginning a suicide pact. Allow me to explain. I, for one, am sick to death of morons carving our laws for us. This comes primarily over the dispute between the American government and file-sharing programs.

When you cry, everything tastes so sweet, except for the tears themselves, which taste like the burning of your soul.

I guess there is nothing much to say except for the following:
1. We kill what we love.
2. We are damaged provider modules
3. We didn't fight our way to the top of the food chain to become vegetarians
4. We are all silently Obliterating

This skin, it does not keep all the blood in.

It's like somebody took a PC, slopped white pancake makeup all across it, and kicked it in the hard drive until it began spewing out mixed up Nine Inch Nails lyrics at random. I know that I probably sound depressed over the whole "underestimating human stupidity" bit, but do you folks now understand why? I get hundreds of links like these every week. I have to wade through seemingly endless amounts of horribly clichéd goth retardedness which makes me wonder how these people successfully unwrapped their free AOL CDs and figured out how to install the software. Did they have help from a third party? Did an AOL representative come over and install it for them? Did the Dark Lord himself give them Internet access? These braindead goth rejects may not have any direct connection to the devil, but by God, what they export onto the Internet does. As far as I can tell, the entire purpose of this website is for the author to explain how much he wants to commit suicide while simultaneously making as many other people want to kill themselves as well. In this sense it does a damn good job and I'm oh so very proud that such a website exists. Why don't the people who always bitch and whine about how much they want to die ever have the balls to actually do the deed and off themselves? Maybe we should start a support group that helps these people gather the courage needed to put a bullet through their skull, assuming the layers of white makeup and dark blue hair don't deflect the bullet.

PS: You can ask the author why he hasn't already killed himself on his forum, but I doubt he'll answer you. He's probably too busy weeping blackened tears in the corner of his grout-stained bathroom. I know I am.

PPS: There is apparently a list of 38 Ministry of Darkness members. You can attempt to join and become one of them as well, but I think you'll have to read the entire Anne Rice collection of novels first.