By now you all know what happened, and it might seem in poor taste to continue with Current Releases this week. However, we feel that is important to separate the incident from the art. What happened has nothing to do with the film itself and absolutely no responsibility should be laid at the feet of the filmmakers. In this light, we will carry on with our Batman special, with a review of The Dark Knight Rises and a retrospective on the Batman films. We advise you to visit coloradocrimevictims.org to support the victims if you wish to.

EXPECTATIONS: Who isn't excited for this one? Batman hysteria has reached the point where any critics who dare to dislike the film are receiving death threats from overzealous Batman nerds. As a critic, I find this terrifying and not at all something I'm looking forward to experiencing. Given my dislike for nerd favourite The Avengers, I can imagine the gnashing of teeth already. I always want to like a film, but I've never been this scared of what will happen if I don't.

REALITY: I left the cinema and breathed a sigh of relief. I liked it! No death threats, no being beaten into a coma with a rubber hose and, best of all, I actually got to watch a good film. The Dark Knight Rises takes the series and its characters to some interesting new places. It doesn't all hit the right notes, but it's structurally superior to The Dark Knight and manages to outdo Batman Begins on the spectacle front. It may even be the best of the lot, but that's still up for discussion. 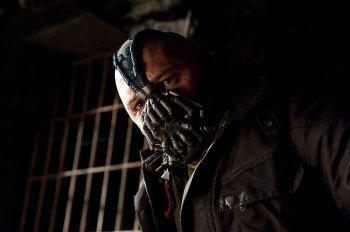 I loved you in Mortal Kombat!With the streets of Gotham city finally free of organised crime, police Commissioner Jim Gordon (Gary Oldman) and Officer John Blake (Joseph Gordon-Levitt) are finding life on the force a little dull. That is, until cat burglar Selina Kyle (Anne Hathaway) steals billionaire recluse Bruce Wayne's (Christian Bale) fingerprints and kidnaps a senator to trade those fingerprints to some dodgy businessmen who, it turns out, are working for mysterious mercenary Bane (Tom Hardy), who is secretly building an underground army to overthrow the status quo and bring Gotham to ruin. Now Wayne, his butler Alfred (Michael Caine), his business partner Lucius Fox (Morgan Freeman) and his new investor and love interest Miranda Tate (Marion Cotillard) must all work together so that Batman can return and save his city.

Bulging plot paragraph aside, this is the kind of mega blockbuster extravaganza for which the plot is largely unimportant. For example, Kyle's motivation is a MacGuffin so contrived that even the film can't seem to decide if it's supposed to exist or not. That's right, it's a computer program that somehow wipes all record of your existence from the world. How? Who cares!? Beyond that, the plot point that allows Bruce Wayne to lose his entire fortune seems lifted directly from Rocky V. The thing is, none of that matters. The film moves so fast through grandiose emotional scenes and huge-scale set pieces that you never get a moment to question the intricacies of the plot. Nolan has basically decided that plot is the least of his worries with this film, and it was a smart choice that allows for some purely cinematic exploration.

What makes the film engaging is the way it approaches its political dilemma through these characters. Bane presents himself publicly as a hero of the 99%, but privately he is a terrifying force of indiscriminate destruction. The underlings that comprise his private army are more than happy to die for him at a moment's notice, and he operates under the pretense of being a revolutionary set to free the city from tyranny. For a while we almost believe him ourselves, but of course we didn't come here to see a liar lead an army for revolution only to kill everyone, we came to see Batman do his thing. In order to have Batman do his thing, they break him down to his lowest point financially, emotionally and physically in order to derive a scenario where he has to drag himself back up (with the help of Tom Conti, of all people, as a vaguely foreign prisoner) both literally and metaphorically. He goes from a billionaire playboy moonlighting as a hero of the people to a genuine hero of the people who truly understands that what his persona represents is more important than his life. 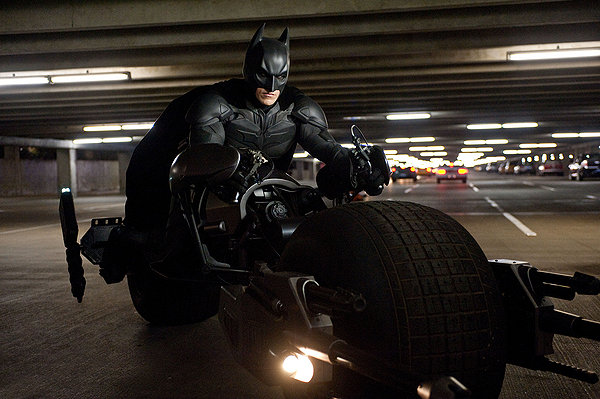 I don't believe in guns... unless they're mounted on vehicles.

Tom Hardy's Bane makes for an excellent villain; his physical prowess is imposing and frightening while his vocal performance is so silly and weird. It's as if Schwarzenegger were dubbed by James Mason with bees in his mouth. When he gives his long speeches he is such an amusing blend of wild-eyed staring and mustache-twirling ham. There's such a wonderful disparity between his physicality and his voice, as though they knew how ridiculous Christian Bale's Batman voice sounded so they went for an even more ridiculous voice for his new nemesis. In that regard it most definitely works.

That balance between visual believability and extreme silliness runs through the entire film. Consider Batman's new flying machine "The Bat," which is some kind of upside helicopter tank that is armed to the teeth. Or Bane's magical painkiller mask. It's all based in comic-book logic, but it looks like a Michael Mann thriller, so we believe it. The central MacGuffin -- a nuclear reactor that could be weaponised -- is another perfect example. Similarly to Inception, Nolan wants us to simply accept everything and move on to the next plot point so we can actually enjoy ourselves. Plot is not important; Haywire taught us that. 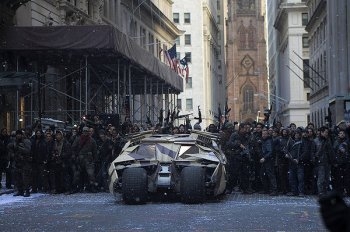 Why are you guys following me!? I guess this camouflage doesn't work after all.There's an operatic streak running throughout the film. Hans Zimmer's score is not only present and correct, but also it has become an intrinsic part of the narrative. Bane's theme is built around the rhythm of a chant that can be heard throughout the soundtrack. The words of the chant "deshay basara" translate to "he rises" and become an important part of Batman's character and his musical motifs. Hearing it mingle with the Batman themes we already know from the previous films makes for some of the most powerful moments in the film. The visuals reinforce this motif with a recurring image of people and things literally rising. It's heavy-handed at times, but I like it. It isn't even about erections; it's about resurrections.

Obviously the returning cast members are as good as you'd expect, with Michael Caine and Gary Oldman being standouts. But new addition Joseph Gordon-Levitt does a hell of a lot with his role. It's true that we don't learn an awful lot about this character other than that he is a police officer and an orphan, but Gordon-Levitt just injects so much humanity into him that we want to see him succeed at all costs. He's the true hero of the film.

The film is constantly building in momentum, but the climax leaves a little to be desired. Everything before that is stunningly good action cinema, but some of what happens in the third act feels a little anti-climactic. That's not to say you'll be disappointed, but I imagine some die-hard Batman fans might feel betrayed by some of the narrative additions. If you're more interested in cinema than comic-book canon, though, then you're probably going to love it.

MINORITY REPORTS: I disagree strongly with your opinion of The Dark Knight Rises, but I will defend to the death your right to give shitty superhero films their due without fear of reprisal from nerds who will forever deny how terrible The Avengers actually is. - Voltaire

I'm with Voltaire. The Dark Knight Rises makes no textual distinction between Bane's actions and the Occupy movement, continuing the trend of superhero films incorporating the most conservative messages known to man. Maybe that's why I generally dislike superhero films. But, hey, at least we agree on the entertainment factor. Like Inception before it, The Dark Knight Rises delivers such sheer spectacle that qualities like plot and subtext almost cease to matter. Almost. - Sean "Keanu Grieves" Hanson

Why are we even bothering to review this? It is, single-handedly, straight-up, hands-down, left-foot-in, left-foot-out, the greatest film that there ever was or ever will be. Let's stop making movies now, the singularity has been reached. There's no way we can get better. Christopher Nolan is our God, and from now on film schools shall be dedicated solely to him. - Martin R. "Vargo" Schneider, who, as of this writing, has not actually seen the movie yet.