Dial-the-Truth Ministries, submitted by Space Monkey. These days attacking the closed-mindedness of a lot of Christian web sites is kind of like kicking a stillborn fetus around with steel-toed boots. While most of Christianity has liberalized somewhat and embraced the changing times, there will always be an almost hysterically conservative fringe that still thinks cameras are going to steal your soul and that AIDS is the flaming sword of a vengeful angel. Despite that, we still sit up and take notice here at SA when a Christian site attacks a Christian performer. Especially a Christian musical group that happens to suck really bad. 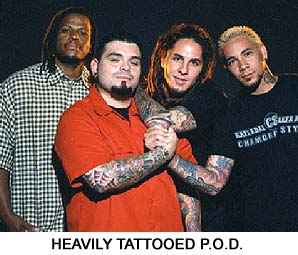 In this article, we’ll clearly document, P.O.D., (like much of CCM. which we have documented many times):Because of the seriousness and spiritual danger of P.O.D., this is a lengthy and detailed article. I would encourage you, very strongly, especially young people, parents or pastors of young people, who are listening to P.O.D. and today’s Christian Rock, to take the time and read it thoroughly and prayerfully.

P.O.D. has always been funny to me. At least Creed attempts to conceal their Christian ties somewhat behind impenetrably melodramatic vocals, meanwhile P.O.D. is on stage 3 at Ozzfest like Limp Bizkit in Pope Hats. This site has created a four article long treatise on reasons why kids should avoid P.O.D. which I must attack because this site is so backwards and stodgy that if a kid reads they don't want them to listen to P.O.D. they will start listening to P.O.D. Look crazy Christians, I'm on your side here, P.O.D. eats lots of shit and I agree with your line that they should be in hell, but you should be touting them, not damning them. Kids will react to you telling them to stay away the same way the centipedes in our apartment would react to one of those sonic insect repellant systems, which is to say they would merge together and form into some sort of super insect that lays eggs in my shattered chest cavity at night.