He has been involved in brawls, riots, negotiations with the Black Panthers and Louis Farrakhan, race discussions in Tokyo twice (1993 and 1999), half dozen assassination attempts, won the Democratic Primary in 1980 in the largest Congressional district in the United States (openly as a Klansman), gathered 75,000 votes for U.S. Senate in 1982.

You can even watch some speech from Tom, but you have to use Real Player and no way am I touching that impure propriety video player. For all I know it could have been programmed by the Hebrews!

The wacky political views of this organization are fairly well documented, and not all that thrilling. For racists, they aren't foul and vulgar enough to really win my heart with words. I tried reading their views but it was entirely too boring. Sorry guys, I'm going to go on not hating everybody who isn't white. Besides, I personally don't trust any racist who doesn't have a scar on his forehead from crushing beer cans against his skull at clan rallies.

Where they fail with words they excel with horrible, horrible racist cartoons. I know it's wrong, but I found these cartoons hilarious, if only for the fact they were so desperately stupid. These guys should take Zack Parsons advice and come up with more creative racial stereotypes. However, I have to give them some credit; the racial slur "Moon Cricket" is one I've never heard before and find to be quite fascinating. It's so zany how could anyone take offense to it? Anyway, let's take a gander at some of these cartoons! 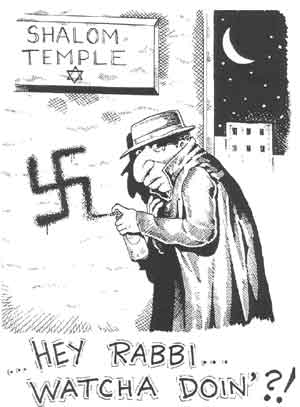 No, I have no idea why Norman Fell is spray painting a swastika on that wall either. I guess I missed that episode of "The Ropers." 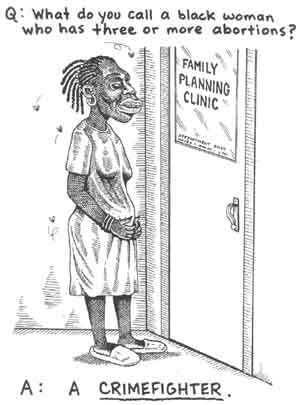 ZING! Oh boy, these guys are comic masterminds. They won me over with that last one. Sorry everybody, but that comic was so good I now hate black people.