Tuesday, Apr 01, 2003 by Rich "Lowtax" Kyanka (@TwitterHasBannedAllMyAccountsEver)
Know of an awful site? Send it to us and become a hero! 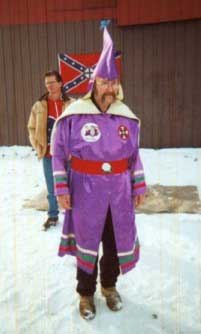 Once de-tongued your nigger will be a lot happier - at least, you won't hear it complaining anywhere near as much. Niggers have nothing interesting to say, anyway. Many owners also castrate their niggers for health reasons (yours, mine, and that of women, not the nigger's). 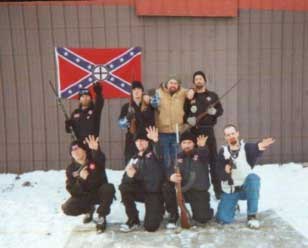 Your nigger can be accommodated in cages with stout iron bars. Make sure, however, that the bars are wide enough to push pieces of nigger food through. The rule of thumb is, four niggers per square yard of cage. So a fifteen foot by thirty foot nigger cage can accommodate two hundred niggers. 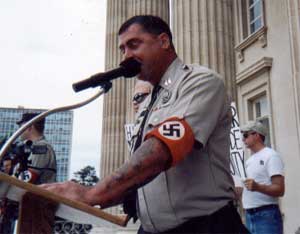 Your Nigger likes fried chicken, corn bread, and watermelon. You should therefore give it none of these things because its lazy ass almost certainly doesn't deserve it.

Lynch the nigger: niggers are cheap and there are millions more where yours came from. So every now and then, push the boat out a bit and lynch a nigger. Lynchings are best done with a rope over the branch of a tree, and niggers just love to be lynched. It makes them feel special. Make your other niggers watch. They'll be so grateful, they'll work harder for a day or two (and then you can lynch another one).

While Michael McQueeney has clearly demonstrated his somewhat negative attitude towards niggers, he really seems to be lacking in the Jew-bashing category. However, we're all human (except robots and aliens and mummies), so I will not fault him for this. As the Grand Dragon of Mercer, Wisconsin, Michael McQueeney's Klu Klux Klan duties include such exciting and festive activities as wearing magic pointy purple wizard costumes, constructing giant crosses from scraps stolen out of a Home Depot dumpster, holding Confederate and Nazi signs, and giving rednecks everywhere a bad name. Now I certainly don't have anything against the KKK; I mean, if their organization didn't exist, then the authorities would have a much more difficult time compiling their list of "FDA-Approved 100% Certified Braindead White Trash." I think white people are cool as hell! For example, my mother and father were both white people (and some claim they still are) and they gave birth to me! How cool is that? I'll tell you how cool: cool as hell! In addition, some other famous white people include Marlon Brando, our US President guy, George Washington, the druggie kid from the Dell commercials, and the Abominable Snowman. I'm sure as heck not going to try to argue that white people aren't "da bomb," because even if I did feel that way, Michael McQueeney would "try to fade me" and probably ask me to "step off his grill" or else he might "bust a cap in my ass." However, I just can't seem to conjure up as much hatred as Michael McQueeney, the Grand Dragon of Mercer, Wisconsin, has towards those pesky niggers and Jews. In fact, I can only honestly agree with him on a mere two points:

Everything else is kind of a toss-up. One on side, I'm lulled into apathy by my intense disinterest in hating niggers and Jews. However, on the other side, Michael McQueeney provides photos of himself standing outside a gas station and a barn... AND THE TWO IMAGES ARE ON SEPERATE PAGES! It is hard to simply "make up" that kind of damning evidence, particularly when 90% of your webpage is devoted to broken links and 404 errors. I doubt those aforementioned errors can be solely blamed on Michael McQueeney, as he is the Grand Dragon of Mercer, Wisconsin, and you don't reach a position of power like that without displaying some "out of the box" thinking skills which rocket you to the top of the "bearded chubby white guy" food chain. No, I have a theory that all his broken links, 404 errors, and lack of content can be blamed on one thing and one thing alone: the niggers and Jews. Okay, those are two things, but I doubt Michael McQueeney can count that high, so please overlook my mistake. Despite the complicated maze of lies and deception that seeks to ruin Michael McQueeney's good name on the Internet, he still manages to get across the important, crucial message that niggers and Jews are great people. Oh wait, I made a mistake there, I meant "they should all be burned to death." Michael McQueeney, Grand Dragon of Mercer, Wisconsin, is very devoted to this cause and feels you and I, as good white Christians (if you are not white or Christian, please go hang yourself) should inform the non-white, non-Christian people that they should promptly hang themselves. Thank you very much, Michael McQueeney! You are truly the best Grand Dragonmaster I've ever seen in Mercer, Wisconsin!

PS: Michael McQueeney, the Grand Dragon of Mercer, Wisconsin, would like you to sign his guestbook! Please, no niggers or Jews!