JL Fusion, submitted by Droopy Goines. I've said it before and I'll say it again: Norway scares the crap out of me. This is primarily why. When you go to the JL Fusion homepage, it doesn't look like much. Just some spastic animation and a promise of "bringing you better surphing in cyberspace." How exactly it is going to bring you better "surphing" is a mystery, since none of the links on the homepage actually go anywhere. But if you happen to have a connection to someone in the know (and you do! Yippee!), they might just be able to provide you with the necessary links to discover the truth about JL Fusion - that it is not just any ordinary website. No, this, my friends, is where flash animation goes to die.

It's probably best to start with the hellodroid. This is where web designer extraordinaire J.L. tells you everything you could ever want to know about his life. No really, everything. He has it split up into chunks of a few years at a time from his birth in 1977 to the present. This is where you can learn all the fascinating facts about J.L., such as that he is from the future, and that he is a vampire. Oh, and of course, all the details of his fragmented love life.

::1995:: Turning 18 , And the Second important Moment of my life Started I never forget this girl , She played drums, Liked Folk-Rock Music and was a English Hippiegirl , you know what? I became a Hippieboy IMAO. This girl i loved so much I could have married her I would have done anything for her, she never came to know i liked her realy. i never said anything.. This girl I was going to be in Love with for over 4 years. I still remember her as the Best girl I have ever met. She was always happy I did Spiritual Studies that year and ahead. and changed Intress radicall in music I stop all Dj mixing , I went in love with Folk rock so i did not have any need for dance music. (The girl loved Folk Rock)

Other things he had no need for include: proper punctuation, capitalization, spelling, spacing, and use of tenses. Oh, an also a proper respect for the capacity of the human eyeball to withstand flash animation. If you ever decide that you want to blow your mind clear out the back of your skull, take a little tour around the virtual maze of optic agony that is Fusion City. It's a creative way of navigating from one strange, disjointed section of J.L.'s site to another. Of course, by "creative" I mean "confusing and unnecessary." But if you can actually manage to find your way around without having your retinas hand in their letters of resignation and hop the next flight to Aruba, such wonders await you! Well, not really. For the most part, it's just a lot of hype for things that are going to be there eventually, but for all the text, images, midis stolen from Zelda 64 and Final Fantasy III, and flash upon flash upon flash, there is almost zero content anywhere on the site. Note well that "almost," for that is where the true horror lies.

Aside from being a vampire from the future, J.L. is one of the world's foremost experts on outer space. That includes being up to date on all sorts of alien lifeforms. He's also an avid believer in the lost city of Atlantis. And then there's Fantasy Kingdom, where all your dreams can come true. That is, of course, assuming that your dreams consist of completely random fantasy stories and poems. 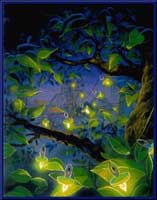 you are a tree
you cannot dance, or sing
not even think
one day they told the river
that it had to die in some sea
that eternal and round lake didn't exist

Yay for humanity! Yayayayayay! Yes, there's more to JL Fusion than you can shake a huge, multifaceted, technicolor, sparkling, vibrating, flaming, seizure-inducing stick at, and more is always on the way. So, in conclusion: ow, my eyes.