Friday, Oct 03, 2003 by Corin Tucker's Stalker (@DennisFarrell)
Know of an awful site? Send it to us and become a hero!

C-Snake's Portfolio, submitted by Lowtax. I had something special planned, I really did. I wanted to break free of the sort of furry sites I've seen featured before, and instead explore the world of people who have sex with trees. Unfortunately, this was not meant to be. Unlike treesex, suicide-inducing furry porn is overabundant on the internet. It's not just an odd fetish, it's a limitless resource of sheer pain. An ocean of animal penis horror. A kiddie pool filled to the brim with suffering. A little rinsecup that the dentist gives you, but full of grown men pretending to be immolated badgers instead of mouthwash. You get the idea. 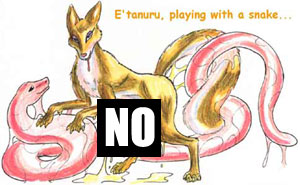 Every picture in this portfolio either features lubricated snakes, enormous genetalia that are larger than the animals themselves, disturbing violence, or a delightful mixture of the three. You know, just to strengthen my suspicion that the entire world is not full of people, but rather soulless robots hellbent on making me go utterly insane because it's part of their coding, which somehow keeps them from killing me outright.