Truthasaur-hypnosis of secret societies, the Millennium event an

Tuesday, Sep 30, 2003 by Rich "Lowtax" Kyanka (@TwitterHasBannedAllMyAccountsEver)
Know of an awful site? Send it to us and become a hero!

Truthasaur-hypnosis of secret societies, the Millennium event an, submitted by Ryoki. Something Awful has one Awful Link per day, and displays two Awful Links of the Day on the front page. The phrase "Something Awful" has two words in it. Two occurrences of the number two means there are a twin pair of twos, and "t" is the First letter of the second word in "World Trade Center" and the "Twin Towers." Therefore, it is painfully obvious that Something Awful was directly responsible for the 9/11 attack on the WTC! Holy moley! Somebody get John Ashcroft on the Blockphone right now!

When flight 11 hit a 110 story tower on september 11, then another plane hit the other 110 story tower and the two towers fell on the 22 story Vista International hotel, the United States as a group of crusaders with Islam became immersed in their unconscious program that leads to world war three, Armageddon. Add up the 11's and 22. It equals 66. 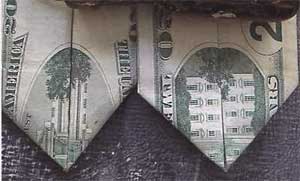 A twenty dollar bill can be folded to show the Trade Center and the Pentagon in flames. The twenty dollar bill was changed in nineteen nintyfive. The designers and engravers of the Federal Treasury Department are certainly comprised of many Mason or others with Masonic connections. This is the nature of the unconscious realm. Indigenous Australians refer to it as the "Dreamtime", not the past, not the present, not the future; a combination of them. Our understanding of this natural and inescapable realm can protect us and help us to evolve.

Farrrrr out man! And to believe I was sitting here and ignorantly believing that the WTC terrorism attack was simply a few wackos from the Middle East hijacking a few commercial airplanes and flying them into very tall buildings! I now realize that the shocking truth is far more disturbing; the evil Masonic conspiracy behind the Federal Treasury Department had been planning this attack for half a decade and, for some inexplicable reason, thought it would be a great idea to advertise this on all our money! Now that's planning! Damn you, you infernal Masonics! Be sure to check out the incoherent, rambling, insane literary masterpieces from fellow wackos across the globe as they cover such important topics as astral travel, jumping off their roof, viruses which are sent to your mailbox and kill you, and the secret mystery behind the secret mysterious number "22." All this and much, much more on the next episode of "My God, You're Fucked Up and Stupid."