Bladed, submitted by Richiepoo. I hope you guys like rap, because this site is just hippin' and hoppin' like a retarded bunny rabbit addicted to prescription muscle relaxers. This, the home page of a gentleman calling himself "Skittles," is a cornucopia of embarrassing idiocy. 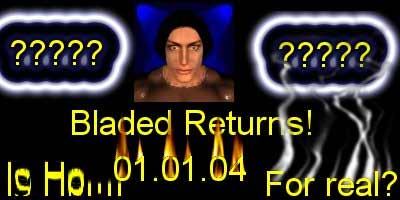 Skittles, also known as "Bladed" to the guys who play wrestling video games with him, is a rough and tough 16-year-old not afraid to admit his love for Jesus Christ or the missile drop kick. Aside from having an elaborate biography of his creepy looking virtual wrestling persona, he has lots of pictures of people from his high school, as well as awesome screen shots of WarCraft III. He even has a page full of AWESOME IMAGES. YEAH! YEAH! Ladies and gentlemen, this youngster knows how to execute Photoshop filters! If you're a graphics artist, I urge you not to look at this site, for you will be jealous and possibly driven to suicide. Truly, he is a talent for the new millennium!

But screw all that, this guy is a rapper, so what about his raps? If you've ever fantasized about what it would sound like if an asthmatic moron going through puberty recorded himself rapping about God, well, this is probably as close to reality as your imagination can get. Seriously, this guy has 3 of his rap songs available for listening, as well as extended introductions and interludes that have him over-explaining the motivations behind his girlish "rapping" and giving props where props are due. His "outro" track features what can easily be described as a moment so unbelievable it rivals such Biblical holy shit moments as Moses parting the sea. Skittles thanks all his fans for supporting him. Fans, as in the plural of fan. No self-respecting person in the world, with the exception of overly polite deaf people and the downright catatonic, would be a fan of a doofus like this. Even his parents have to be rolling their eyes at the misguided stupidity of their poor son, who lacks the necessary self-awareness to feel the intense shame he should be feeling.

All this has me wondering: is our educational system failing? Are there no jocks or bullies left to enforce quality control? I assume this wonderful artist, Skittles, is at least in high school. And if he is, should he not be the subject of regular wedgies and hazing for his pathetic and terrifying attempts to express his artistic nature? I was under the impression that rap was supposed to sound kind of rough and gritty, fast and with a lot of attitude. This sounds like a young man whining about whether or not he should tell his parents he has impure thoughts about the other boys on the swim team.

Dear Skittles, please forgo any future attempts at artistic expression. If you really want to impress God, take a vow of silence. I doubt even an omniscient being capable of seeing and knowing everything could find anything redeeming about your music.