Tuesday, Feb 03, 2004 by Rich "Lowtax" Kyanka (@TwitterHasBannedAllMyAccountsEver)
Know of an awful site? Send it to us and become a hero!

The ENTERPRISE MISSION, submitted by scanned. With the recent announcement that those eggheads at NASA successfully sent something to Mars to do something to something else, many people are under the mistaken impression that the engineers working for our space program should be respected or revered. This is not the case! The Enterprise Mission lays the groundwork for one of the most complicated and chilling conspiracies since Martin Luthor King Jr. shot John F. Kennedy in the study during Ronald Reagan's inaugural ball. By spending countless minutes studying footage sent back by NASA's infernal drones, the webmaster of Enterprise Mission has been able to determine that not only have we been to Mars before, but there are currently aliens sabotaging our equipment on the dastardly planet and those Washington fatcats are trying to silence it by covering up the truth! Oh no! 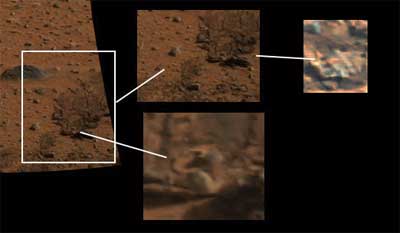 Let's consider this for a moment. The most obvious way to encode such a message would be to place the city on an obvious "tetrahedral" latitude. But 19.5° N by 77° W would have placed the capitol city off the land and into the ocean off of Mexico. Further, this was territory that the English/Masonic colonists did not control. Similarly, placing it at a latitude of 33° N would have left them trying to build their city in the Atlantic off the coast of Georgia. So the only logical place they could choose for their new Atlantean capitol was where they eventually did place it -- 39° N.

Well shit, this guy can divide by two; I'm convinced! There is also a chilling story about how America was founded by Scottish Freemasons from Atlantis using hyperdimensional travel and some incomprehensible mess about vast amounts of water on Mars. Say what you will about this guy's mental stability, but you have to admit that he's really dedicated to this planet! It's better than stalking and sending countless letters to Jodie Foster at least.