Tuesday, Apr 12, 2005 by Rich "Lowtax" Kyanka (@TwitterHasBannedAllMyAccountsEver)
Know of an awful site? Send it to us and become a hero!

Intuitions, submitted by TheMeEvan. Kirk Chukalas is some goofy college dropout who is apparently obsessed with his own face and ability to use Adobe Premiere without suffering any obvious legal consequences. He produces music videos which feature roughly 500 nonstop, uninterrupted minutes of footage showing his face from various angles, processed through various video plugins like "starry wipe #4" and "awesome mosaic effect #9." These videos are terribly fantastic and must be seen to be believed, and even then I'm not sure that you'll believe them. 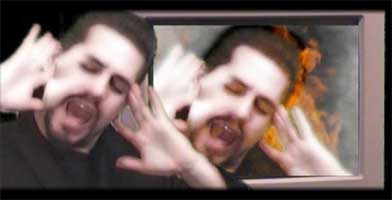 When I first started making music, I had no idea that I would be singing. I didn't even think I could do it. I started with a couple cover songs and ended up writing originals. A lot of the songs you hear on this site were done in my bedroom. Yes, it can be done and I did it. So, I molded a style all my own with my voice. I think, the music I write reflects our world in which we live. My intention is to use music as a tool to educate emotions and thoughts. The songs I write are all about love, heart ache, sadness, triumph and success.

That's odd, when he first started making music, I had no idea that he was singing. I just thought some fruity goth version of Max Headroom was floating on my computer monitor while computer-synthesized speech looped in the background. Seriously, what's with this guy and his pasty white face obsession?