Dumbledore is Not Dead!

Dumbledore is Not Dead!, submitted by wealllovehim. I know nothing about Harry Potter. I've never read a Harry Potter book, I've never seen a Harry Potter film, and I stay away from all Harry Potter websites. Why? BECAUSE HARRY POTTER FANS SCARE THE CRAP OUT OF ME. It's like a religion to some of these folks; oh my god, you don't read Harry Potter? You should read Harry Potter! It's an incredible series! I stood in line for 18 weeks when I heard a new book might be coming out! I traded my newborn baby for a signed hardcover copy of "Harry Potter Races a Leprechaun!" Correct me if I'm wrong here, but isn't Harry Potter just a story about some wizard kid shooting lightning beams and hanging out with unicorns and castles and flying brooms and crap? That's not really my cup of tea, but it apparently is to millions upon millions of obsessed fans across the globe. Here is one example, a webmaster holding on so tightly to his delusion that he'll spend days of his life praying for the return of a fictional character who never existed in the first place. 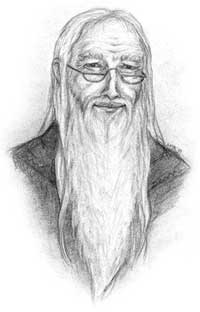 Caught up in the roller coaster of J.K.'s marvelous and fantastic mysteries, Snape's betrayal and the death of Dumbledore caught me completely by surprise. Dumbledore was dead, and on top of that, Snape had done it. My brand-new copy of Half-Blood Prince became as tear-stained as one of Hagrid's notes, and I remained upset about it all the rest of the day. But after sleeping on it, the next day I realized that there were important clues about Snape and Dumbledore that I had missed. And the more I looked back, the more clues I found, realizing that they had been there all along.

Oh no! What a depressing tale of lost love and eternal anguish. Please sir, spend the next year of your life closely analyzing more fictional books so your futile hope may live on. Be strong and remember that Dumbledore will always live in your heart, along with all the other elves and dwarves and hobbits and dragons and magic lawn chairs and crap decomposing in the depressing minefield of your brain.