Saturday, Apr 24, 2004 by Zachary "Spokker Jones" Gutierrez
Recently in an FYAD contest I gave away my one of a kind Pete Harnisch rated rookie card to some lucky winner. While I was glad to do it I can't say that I don't feel some kind of remorse. I know I'm going to miss the little guy. We've been through a lot together. Like the time we broke into the fireworks factory, lit all the fireworks, and killed the night watchman. And there was that time he hired a stripper for my birthday but we had a little "accident" and we had to bury her. Sure, he gave me AIDS, got me eighteen thousand dollars into debt, and shit in my pool, but I still love Pete like a brother. 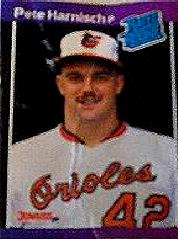 It's the latest fad to sweep Europe since looking dumb and being dumb. It's Toothing! Don't know what "Toothing" is? Let me give you a quick course on the whole filthy process. Since everyone loves the internet so much some wacky folks have decided to take the internet with them where ever they go. Using the power of Blue Tooth technology users can send text messages to people around them who also have Blue Tooth devices asking for sex. If they hit it off both people will meet up and have fat sweaty sex until the cows come home. That's "Toothing" in a nutshell. What will scientists think of next that perverts can ruin?

All homosexuals are currently pleasuring other men. Please stay on the line. Your call is important to us.

If I were the type of person who would understand what "monosexual tooth teaser" means I hope that you would find it in your heart to put me out of my misery.

Woah! This is getting pretty hot.

I have no idea what any of this means, but hey, it's the new fad!

This is the number one reason I'm not going to participate in this wireless bluetooth technology. I'd hate to be talking with my girlfriend and have a guy's hairy dick popping up on my phone or PDA or whatever this shit is on.

You can tooth my bung hole anyday.

What? You thought he was going to say Chief Financial Officer?