Thursday, Nov 10, 2005 by Reid "Frolixo" Paskiewicz
Know of an awful site? Send it to us and become a hero!

National Bolshevik Front, submitted by Capwinky. Despite making this site an ALOD, I really like it. It's cute, kind of like a retarded kid trying to surf. Here we thought that the radical Communists were all gone and the Cold War was is just a historical footnote ripe for satire. Well it seems that some Russian youths want the glory days back of waiting in line for toilet paper and getting a 50 year sentence to a Siberian gulag for owning a bass guitar. Of course all these "revolutionaries" were in short pants at the end of Communism so haven't experinced the horrors of Stalin and his followers. 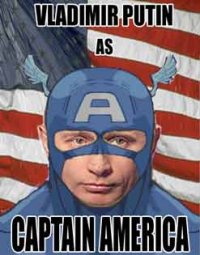 By far the best part of this site, and the only reason I picked it, is the propaganda section. A lot of them attack Putin for being an American stooge, and selling out Russia, and are really terrible, yet totally awesome. Yeah I'm sure Russia would be doing great if they went back to a Communist system. Although it probably would be worth it if they attacked Poland again.

P.S. America smells pass it on.