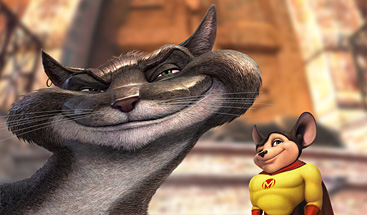 "Their mouse owns a kingdom, our mouse can lift a kingdom." - Neil Beck

Despite what Neil Beck says, Mickey Mouse and Mighty Mouse have a lot in common. For example, neither character has ever entertained a single person, ever. I guess there are some exceptions, with "HOLY SHIT MICKEY IS BADASS 0_0" coming from people who somehow enjoyed Kingdom Hearts 2, and Mighty Mouse actually being pretty watchable in the cartoons that John Kricfalusi worked on (but about three of you know what I'm talking about so I guess it doesn't matter).

I just find it horrifying that anyone would actually like Mighty Mouse enough to create a web page about him, even if it is the HTML design equivalent of toilet paper. But Neil Beck is obviously too hardcore for a normal person to understand, and given the amount of times he is able to make a pun out of the word "mighty," this is more than obvious. Let's hear from the man himself:

I consider myself "The Bad Boy of Mighty Mouse Fans" because I do things for Mighty that, I think, nobody else has done before.

The cartoons look "Mighty" cool, and some of them go perfectly with particular songs. The music is fast and powerful, just like Mighty Mouse!!!!! And I am always trying to get Mighty back on TV where he belongs! So I fight for Mighty.

Music... mixed with VIDEO?! Someone had better patent that because I think Neil is onto something! Just try not to think about the implications of Mighty Mouse being the only mouse alive that can withstand the lovemaking of a human. Possibly named Neil.