Friday, Nov 10, 2000 by Rich "Lowtax" Kyanka (@TwitterHasBannedAllMyAccountsEver)
Know of an awful site? Send it to us and become a hero!

Opera, Playable Symphonic Music Ro, submitted by n8. Insane nutball quotes the Bible, himself, and various fictional people so he can make the most confusing and psychotic webpage ever. He succeeds on so many levels that it's truly a work of art. 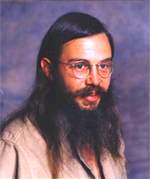 My name is Richard S. Tolley. I have written and lived an opera about reincarnation, U.F.O.'s over my parent's house when I was a young boy, and U.F.O.'s at the birth of Christ. The genetic code repeats itself like a computer and has been repeating itself over and over again throughout history. Therefore by this theory, the Virgin Mary, Jesus, Joseph, Mohammad, King Arthur, Makumba, etc., etc., etc. are repeated throughout history and are here with us now in a modern incarnation. I have also written a physics paper describing in two paragraphs the entire structure of the Universe. The physics paper and the opera can be clicked on the following page. The most important themes to listen to are: "Theme from Barâ-t © ," "Journey," "I will be...," "Skull-Whips Theme," and "So Sorry." I know the Alternative Rock and the world revolves around me, my Opera: 'Barâ-t', and Jeanine. Barâ-t is an Arabic word which means Holy Seal, usually used with Al-bâbâ for Papal Holy Bull, Bulla, or Seal. It is an opera summarizing all religion. It is God's Opera. You ought'a see my astrology Birthchart. I am central to this Universe. I have by mid-point three Grand Crosses and four Grand Trines... What if God was one of us?? Let me Riiiiiiiiiddddeeee!!!!!!

"Apparently Our Internet Police Squadron Has Eliminated The Server The World And I Depend On For The Apocrypha."

Again, With Our New Server, Panacom, in Florida, We Are Having A Dispute With The Anti-Christs ON The Internet or The World Wide Anti-Christ.

The website also includes a bunch of detailed, remarkably fascinating conversations between him and the guy at his ISP, and the lyrics from Eddie Money's "Walk on Water." Random paragraphs are also underlined for your convenience, or perhaps because of the fact that this guy's absolutely nuts. Here's one of my favorite quotes:

"I HAVE APPROXIMATELY 1000 HITS ON MY WEB PAGE. I HAVE GOTTEN NO E-MAIL ABOUT THE OPERA. I HAVE LIST BOT FOR MESSAGES TOO. I HAVE NO MESSAGES THERE. I HAVE COME TO THE CONCLUSION THAT THIS IS NOT POSSIBLE. I HAVE NOW CONCLUDED THAT MY HIT COUNTER IS NOT WORKING AND I AM NOT RECEIVING YOUR MESSAGES AT ALL BECAUSE THE INCORPOREAL AND OR GOD IS THE ENTIRE BEING WE LIVE WITHIN AND THAT EVERYTHING IS INCORPOREAL AND GOD WITHIN HIS BEING HAS BEEN EDITING MY TELEPHONE, WEB PAGE, AND E-MAIL, CAN ERASE ELECTRONIC FILES INSTANTLY. IT HAS BEEN A STRUGGLE WITH THIS WEB PAGE BECAUSE OFTEN I WILL COPY A FILE ELECTRONICALLY AND I HAVE TO DO IT TWICE OR THREE TIMES BECAUSE IT HASN'T COPIED. THERE IS NO OTHER WAY TO EXPLAIN IT! TRY LIST BOT FOR YOURSELF. YOU CAN CHECK YOUR MESSAGES TO SEE IF THEY REGISTER ON THE COMPUTER. THE BUTTONS ARE BELOW. I HAVE NO MESSAGES AT THIS TIME. TRY IT. IT WILL PROBABLY BE A CLEAR INDICATION OF THE MAGICAL NATURE OF OUR ELECTRONIC GOD!!!"

UPDATE: Dear Lord, this is so damn hilarious. Ever wonder what popular political figures are goblins, orcs, and "semi-vultures"? Look no further, because they're all listed here!

The United States Secretary to the United Nations is a Goon.
The President of the United States is a half-Goon, half-human.
Madeline Albright is an Ogre.
Newt Ginrich is a Goblin. He did shoot griaffes, as one of Adam's sons...
Judge Renquist is half-Elf, half-Orc.
Christ was a Vulture. His karma was Golgotha, the place of the skulls.