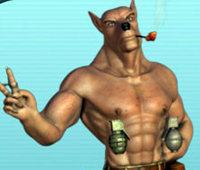 The next big franchise is here! Well, it would be, if the entertainment industry had the sense to know a good idea when it poked them in the eyes with its stretchy nipples. Anyway, I give you Dick Satisfaction!

A dumping ground for German designer Hauke Scheer's animation shorts and 3D characters, this site feels like a big, sad presentation for a video game or TV-show franchise that is destined for obscurity, maybe because the "Dick Satisfaction" proposal will never make it through the executives' spam filters.

The "series" is centered around Dick Satisfaction, a ripped and raunchy transdimensional bounty hunter with one of the dumbest, ungoogleable names imaginable. Oh, and he's a nightmarish sexualized werewolf with grenades attached to his nipples. He's like Duke Nukem, Really Really Big Man, Crash Bandicoot, and a Big Dog T-shirt rolled up into a turd burrito. He smokes a pipe, which one assumes is supposed to make him look like a badass, but instead it just makes him look like a goofy furry version of that "Bob" guy.

Dick must contend with a robust rogues gallery featuring the likes of Toad Guy and Space Nazi. His best friend is a toilet-robot, because someone is trying really hard to seem silly and off-color. During minute-long "movies" like this one, you can finally see these great characters in motion! After defeating the bad guys, Dick Satisfaction pulls on his elastic nipples and howls, like all crimefighters do in their moments of glory. 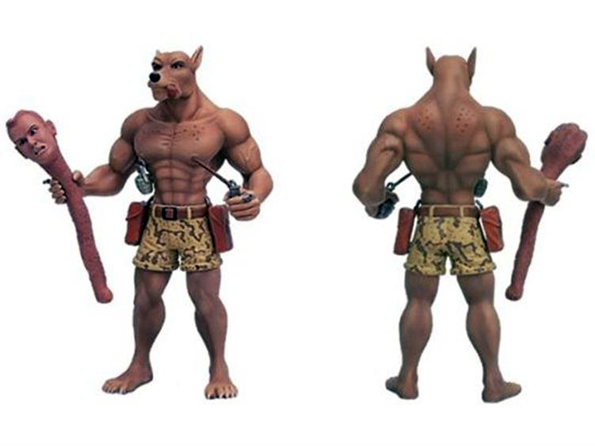 Despite the lack of a Dick Satisfaction game, webcomic, webseries, or anything that might get someone interested in the character, there's still merchandise. For just $54 (plus postage), you can be the proud owner of an official Dick Satisfaction figurine! He's holding the head of Toad Guy, who would appear to be dead, but I have a feeling we'll be seeing that pesky foe again and again! Only on this site, though.